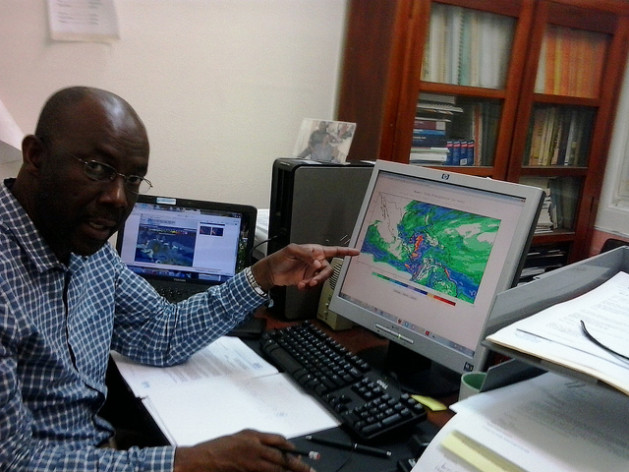 PORT OF SPAIN, Dec 31 2013 (IPS) - In the southwest peninsula of Cedros, one of Trinidad’s driest areas, Jenson Alexander grows the cocoa used for many years by the British chocolate giant Cadbury.

Dry conditions mean that he frequently faces bush fires, a challenge compounded by increasing climate variability that makes it difficult to predict when an extended dry season, and the fires that accompany it, are likely to occur.

“We are dealing with a science that has large uncertainties and 10 days ahead is very long in terms of how the atmosphere may or may not change." -- Kenneth Kerr

So in May, when the Trinidad and Tobago Meteorological Service (TTMS) began issuing weather bulletins specifically to keep farmers updated on expected weather conditions, he found a measure of relief.

“Before, it was difficult when you were expecting to have rain and [instead] you were having drought…and bush fires,” Alexander told IPS.

The 10-day bulletins for farmers that the TTMS issues have considerably reduced the uncertainty, he said. “Now we have updates, we can plan better, if we are having an extended dry season. So bush fires won’t affect us” as they did before, he said.

Kenneth Kerr, a climate meteorologist at TTMS, told IPS that “cocoa farmers have indicated that they found the bulletins very useful.”

Trinidad boasts some of the finest cocoa in the world and the makers of Cadbury chocolate once owned and operated a cocoa estate in the island.

Kerr is one of two meteorologists in Trinidad and Tobago who produce 10-day forecasts geared specifically to the farming community. The other, Arlene Aaron-Morrison, is a trained agrometeorologist as well as a climatologist.

This initiative is known as the Caribbean Agrometeorological Initiative (CAMI).

Its objective is to increase and sustain farm productivity in the Caribbean region “through improved applications of weather and climate information using an integrated and coordinated approach.”

CAMI’s website states that support for agriculture is a priority since the  sector not only contributes to food security but also helps to reduce poverty and stimulate economic growth.

CAMI acknowledges that, “The Caribbean region is vulnerable to a wide range of natural hazards, ranging from catastrophic events such as floods, droughts, and tropical cyclones to pests and diseases in plants, animals and humans.

“Especially in poor rural areas, these disasters cause much suffering, infrastructure and environmental damage, aggravate food insecurity and slow down or even reverse development gains.

Against this background, a number of meteorologists around the region have been trained in agrometeorology. They now provide regular updates to farmers regarding the weather conditions expected in the days or month ahead.

“Those updates are very beneficial,” Alexander said. “Now, we can plan our programme better in the field, whether it is harvesting or planting.”

Kerr explained that the TTMS provides both a two to three-page Agromet Forecast and a four to five-page Agromet Bulletin. The forecast gives a 10-day prediction of rainfall and temperature for the north, south, east, west and central areas of Trinidad and for Tobago, with a brief summary at the end as to how these expected conditions will affect the work of farmers.

The Agromet Bulletin discusses at length the preceding 10 days’ weather, as well as  the next 10 days’ forecast. It includes data on wind speed and expected humidity. It also analyses in detail how farmers can best respond to the expected climate conditions.

Both the forecast and the bulletin provide the forecasts in terms of percentage probability.

“We are dealing with a science that has large uncertainties and 10 days ahead is very long in terms of how the atmosphere may or may not change. That is why we use probability,” Kerr said.

The forecast and bulletin provide definitions of the terms used and of the likelihood associated with a particular percentage probability. A probability greater than 70 percent means there is a very good chance that the forecast will prove true.

Kerr added, “The further away from the day the forecast was made, the less accurate it is. Ten days is the maximum for any degree of credibility.”

Kerr explained how farmers may use the forecast: If two of the 10 days are expected to be wet, the weather will hamper fieldwork. On the other hand, “it provides an opportunity for the farmer to harvest rainwater or may reduce the need for irrigation during those two days. Or it may act as a buffer for drier days or reduce heat stress for newly planted or germinating crops.”

Such analysis on how farmers can work with the impending weather conditions is routinely provided in the Agromet Bulletins.

The forecasts are done through computer modelling. “We use several models to look at what is happening and to see what is most likely to occur. Then using our subjective judgement based on our training and experience along with the climatology of the various locations, we arrive at a forecast for the different districts,” Kerr explained.

The findings are supplied to farmers through e-mail, the media, and one-on-one, said Aaron-Morrison.

The bulletin and forecast are also made available through agricultural extension offices and other agriculture-based organisations, including the Agricultural Society of Trinidad and Tobago, the Caribbean Agricultural Research and Development Institute and the Tobago House of Assembly.