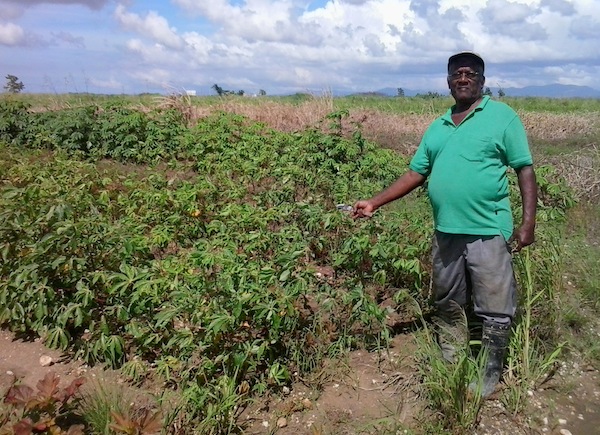 CARONI, Trinidad, Dec 22 2013 (IPS) - Ramdeo Boondoo, a root crop farmer in Caroni, Trinidad, understands better than most the challenge of developing crops that are both climate resilient and marketable.

“It is the eye that buys, not the money,” Boondoo said. Crops must be able to resist effects of climate change while looking and tasting as good as their traditional counterparts. But such produce requires decades of experimentation, which researchers in the Trinidad are beginning to undertake.

“It is very rare that you will get [a genetically altered] crop that is as good as any of the parents” from which the new variety is made, said Herman Adams, a consultant at the Trinidad-based Caribbean Agricultural Research and Development Institute (CARDI).

Popular varieties of crops were developed over the centuries by people cutting slips of old varieties that they enjoyed and then growing them as clones in a process known as vegetative reproduction, according to Adams.

"It takes over 20 years of selection and cross-pollinating to get the right qualities."
-- Herman Adams

He explained that sexual reproduction disrupts the parental genetic combination that gives the traditional varieties their appealing taste.

Boondoo has been working on developing a sweet potato that combines the climate-resilient qualities of the traditional “chicken foot” variety popular in Trinidad with the uniform shape of the American Centennial sweet potato.

The chicken foot sweet potato is the most resilient, according to Boondoo. “It withstands drought and damp conditions,” he said. “But…they do not carry a uniform shape or size.”

Manufacturers of agro-products, such as chips and flour made of cassava or plantain, want crops that are not just uniform in taste but also in shape, to make mechanical processing easier. The American Centennial variety has a uniform shape but does not appeal to locals who are accustomed to sweet potatoes with a firmer consistency.

If Boondoo can develop a sweet potato with the traits of both the chicken foot and the American Centennial, he will be better able to supply food processors while also giving local consumers more variety, and his crop losses due to floods or droughts would be greatly reduced.

Chairperson of the Tobago Agro Processors Association, Darilyn Smart, also emphasised that “uniformity is key for the export, hotel and restaurant sectors.”

“In order to export to the EU, produce must meet requirements in terms of size, shape, degree of ripeness, and so on,” Smart told IPS. “For the hotels and restaurants it is also important that we provide consistent products, especially if they are being used on the buffet table.”

Producing new varieties of crops that meet these exacting standards is “a long process”, according to Adams. It involves cross-pollination of the plant, first on a small scale, and then, depending on the initial outcome, large-scale field trials are conducted.

Another objective of these trials is also to produce “high-yielding, competitively priced products,” Boondoo said.

CARDI is working with farmers on these field trials to identify climate-resilient varieties that will also fare well on the market. The institute’s assistance includes training in good agricultural practices, said Dr. Janet Lawrence, an entomologist and programme leader for protected agriculture at CARDI.

“When you create a good environment through [good agricultural practices], then varieties can show their true genetic potential,” Adams explained. Those varieties that show the greatest promise are then used for the field trials.

Smart told the IPS that the Tobago Agro Processors Association will soon be introducing its own pilot project to “ensure crops are uniform, consistent, and disease free, as much as possible.” The project will rely on bio and organic farming methods.

Some of the produce from this project will be used by agro-processors, who will manufacture a value-added product for hotels and supermarkets. “We’re seeking to export the other products to the Caribbean and European countries,” she said.

As well as breeding climate-resilient varieties, CARDI is promoting the use of protected agriculture – altering the environment to enhance growth – to protect crops from extreme or adverse weather conditions and to control pests that are associated with climate variability and change.

Protected agriculture “spans a continuum from the use of row covers, shade structures to complex structures/greenhouses,” Lawrence said in an e-mail.

Through its protected agriculture research and development programme, CARDI “has sought to generate, validate and transfer ‘best’ practices that have the potential to improve the efficiency and productivity of the [protected agriculture] operations,” Lawrence told IPS.

CARDI has worked with several local, regional and agricultural organisations to disseminate information on the basic principles and practices of protected agriculture, Lawrence said. So far the institute has trained over 200 individuals and organisations.