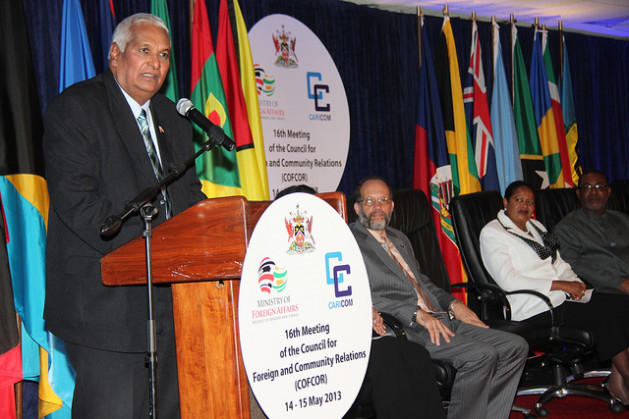 PORT OF SPAIN, Trinidad, May 18 2013 (IPS) - Whether by accident or coincidence, recent days have seen a variety of Caribbean leaders and journalists question whether the region is failing to pursue leadership roles within international organisations – and thus losing its voice in global issues like trade, climate change, and peace and security.

“These days, it is difficult to find CARICOM citizens in top positions, except for Dr. Carissa F. Etienne of Dominica who is director general of PAHO [the Pan American Health Organisation]; Albert Ramdin of Suriname, who is assistant secretary general at the OAS [Organisation of American States]; and Judge Patrick Robinson of Jamaica, who is president of the International Criminal Tribunal for the former Yugoslavia,” the Jamaica Observer said in an editorial this week.

The paper went on to blame “the complete lack of strategic planning by the political leadership and Caricom Secretariat in positioning our regional citizens for top jobs.”

Earlier in the week, the country’s former prime minister P.J. Patterson, speaking at the launch of the book “Multilateral Diplomacy for Small States” by former Guyanese foreign affairs minister Rudy Insanally, also lamented the fact that few from the Caribbean Community (CARICOM) were occupying high-profile positions outside the region itself.

In defence of the 15-member bloc, Trinidad and Tobago’s Foreign Affairs Minister Winston Dookeran, who chairs the CARICOM Council for Foreign and Community Relations (COFCOR), said the issue was among “strategic matters” discussed during the two-day meeting of Caribbean foreign ministers that ended here Wednesday.

“At the level of Caribbean personalities in international organisations we are conscious of it and we had a long discussion on that and we are devising a process by which we are trying to improve that presence,” he told IPS.

Dookeran, who in his own address to the foreign ministers had also questioned whether “diplomacy in the Caribbean has lost its magic”, said that Caribbean countries need to make “the political statement as necessary in the councils of those bodies that we need to have a higher presence”.

CARICOM Secretary General Irwin La Rocque told IPS that Caribbean countries, despite their seemingly low profile, are still viewed as “prized assets” globally, and points to the presence at the meeting here of delegations from as far away as Japan and New Zealand.

“I am not so sure we have lost our charm, I think it is there. A number of political personalities have expressed an interest in coming to the heads of government meeting in Trinidad in July and I think that in itself speaks volumes,” La Roque said.

He added that there have been recent bilateral discussions with the United Arab Emirates, Turkey and Chile, arguing “the outside world seems to recognise the ability of the CARICOM countries to punch above its weight.

“I don’t think we have lost the charm, I think what we have to do is to be a little certain in terms of harnessing and leveraging our collective voices in the international forum,” he told IPS.

Caribbean diplomacy is expected to benefit from the decision of the Trinidad and Tobago government to fund a diplomatic academy at the University of the West Indies (UWI) that “would provide current and future diplomats, government officials, non-state actors with training and learning facilities on issues and processes that are relevant to the discharge of our diplomacy and the conduct of our foreign relations”.

Dookeran, who has been calling for a “new frontier for Caribbean convergence”, said the academy, which opens in September with an international conference, “will establish a network of cooperation with similar training and learning institutions to benefit from the benefits and offerings from other countries,” and that interest has been shown by countries in North America, Asia, Europe and Latin America.

“We are realising the limitations of being a one-language country,” he conceded. “It will take time to change that…this is part of our British inheritance.”

The CARICOM foreign ministers have also vowed to pursue reforms in the United Nations Security Council to better take into consideration the positions of developing countries.

“Clearly that’s an issue that is very troubling,” Dookeran said, adding that the membership should be “placed on the agenda squarely and frontally at the next [General] Assembly”.

“We have in fact begun to talk with some major countries in the world in order to make sure we have the necessary political clout to make a start,” he said.

The communiqué issued at the end of the meeting here said Japan’s candidature for a 2016-2017 non-permanent seat and reform of the Security Council had been discussed with Minoru Kiuchi, the parliamentary vice-minister for foreign policy, and “welcomed the commitment expressed by Japan to drastically increase assistance” to the region.

Nonetheless, Dookeran insists that small states “should have a political presence in the Security Council”.

“We are not saying in what ways it should be done at this stage, and we are saying that the continent of Africa should definitely be part of that process,” he said. Such changes would be a reflection “of the return to political and moral legitimacy of the body and therefore there is need to establish that so that its views cannot be ignored.

“There is [also] need to have more diplomatic dialogue with international financial institutions” such as the World Bank and the International Monetary Fund (IMF) so as to get them to change their lending policies to small island developing states (SIDS), he said.

In this vein, the Caribbean is working on developing new strategic partnerships with other SIDS “so that we can improve the strength of the voice of the small economies of the world.”