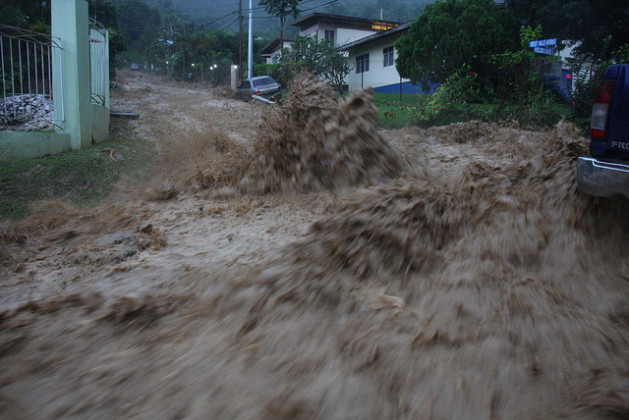 Disaster officials are blaming the floods in Trinidad on the denudation of hillsides by builders and "slash and burn” farming. Credit: Peter Richards/IPS

PORT OF SPAIN, Trinidad, May 12 2013 (IPS) - Officially, the Caribbean’s rainy season begins in June, coinciding with the start of the hurricane season. But recently, heavy rains have signalled an early start to the rainy season, flooding streets, swelling rivers and causing widespread damage to crops.

“With global warming, you have to expect anything these days,” Shiraz Khan, president of the Trinidad and Tobago Farmers’ Association (TTFA), told IPS.

He said the situation has been further complicated by the fact that during the dry season, many people were harming “greenery”, destroying water paths and hurting lands farmers use for planting.

"With global warming, you have to expect anything these days."
-- Shiraz Khan

“This is basically what is happening throughout the country,” he said, warning consumers to brace for increased food prices as helpless farmers watch their crops being destroyed by floods.

Dhano Sookho, president of the Agricultural Society of Trinidad and Tobago, told IPS that the “water channels are not being maintained”. He is calling for the establishment of an inter-agency group including the government to work out solutions to the problem.

The government, which in the past has had to compensate farmers to the tune of millions of dollars for lost crops due to floods, says it will undertake an early assessment of the situation and that “the timely submission of claims will ensure a speedy disbursement of relief”.

Devant Maharaj, food production minister, said that as soon as claims are lodged with the necessary authorities, then a schedule of payments will be made, even as Khan noted that in some areas, farmers’ losses were as high as 100 percent.

But disaster officials are blaming the floods on the denudation of the hillsides by builders and on the practises of so-called “slash and burn” farmers to clear lands for cultivation.

Hills have a natural cycle of replenishment during the dry season, said Stephen Ramroop, head of Disaster Preparedness and Management (ODPM), while addressing a meeting of the Inter-Governmental Coordination Group for the Tsunami and other Coastal Hazards Warning System for the Caribbean here last week.

Because of this natural cycle, fires cannot be stopped altogether, he said, adding that people must not be allowed to build their homes illegally and in a manner that allows them to be in the path of danger.

He told the meeting of a recent aerial reconnaissance of the hillsides in Trinidad and Tobago.

“What we saw was that a lot of the water that was spilling onto the roads because people put gravel and sand in the drains… clogging waterways and causing flooding,” he said, noting that in the past few months, the authorities cleared several waterways only for the situation to be repeated.

“We can’t keep clearing the drains that people are blocking up,” he warned.

The coalition People’s Partnership government has warned that it will adopt a tough stance against those building structures and not following to various codes.

Those “bad developers” would have no choice but to adhere to the standards once the National Spatial Strategy is developed and implemented, said Bhoendradatt Tewarie, the minister of planning and sustainable development.

“When I became minister, I did not want to go for any kind of heavy enforcement because the situation was unclear, the rules were not clear, [and] it was so arbitrary,” he said. Now, he said, once national and regional strategies are in place, “we are going to be very strict about new development and the standards they adhere to.”

“I am not joking about this,” he told IPS.

He has warned that if contractors behave “like citizens who do not care,” then strong action will be taken.

The government intends to introduce a planning and development bill that would focus on “big development”, such as those projects undertaken by the state or private developers. It would also hand local governmental bodies approvals for housing developments in the communities.

But even as the authorities grapple with the causes of the floods here, a local marketing and distributing company says it can provide the technology that would allow farmers to produce higher quality and increased food crops throughout the year.

The company says it has teamed up with the U.S.-based Atlas Manufacturing to install affordable greenhouses following requests from farmers who had been exposed to the technology before.

“The farmers told us the problems they were having. They wanted us to retrofit a greenhouse suited to our climate,” said Fareed Rahaman, the technical director within the agricultural and industrial department of the local company M&D.

“[The] greenhouse will have a tonne of opportunities and benefits to farmers,” he told IPS.

Speaking during a demonstration exercise last week, he said a single farmer can produce roughly 1,000 pounds of tomatoes weekly from 1,000 plants, indoor production that significantly outweighs that of the outdoors.

“In the rainy season, what you find is that prices of crops tend to go up. If you want to maintain crops at reasonable prices throughout the year, you would have to go undercover,” he said. He pointed out that during the rainy season, soil nutrients diminish and erosion increases, factors that work against farmers and decrease overall output.