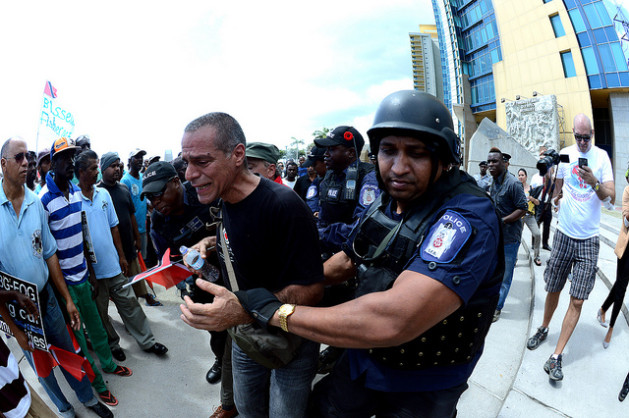 President of Fishermen and Friends of the Sea (FFOS) Gary Aboud is arrested near the International Waterfront in Port of Spain. Credit: Peter Richards/IPS

PORT OF SPAIN, Nov 21 2013 (IPS) - The demonstration took place on land and sea simultaneously. In the end, police had arrested three people, including Gary Aboud, president of the Trinidadian NGO Fishermen and Friends of the Sea (FFOS), but protesters were undaunted. They would be back.

“We are going to re-assemble and go back to the drawing board. The action gave the government a clear indication of how serious we are,” Aboud told IPS. He now faces charges of resisting arrest, obstructing the police and protesting without permission on Nov. 13.

"Each air gun is emitting almost double the sound of a single jet and is equivalent to sound that occurs when you use explosives." -- Gary Aboud

At the centre of the dispute are the seismic surveys in which energy companies searching for oil and hydrocarbons in the seabed deploy air guns, which are towed behind ships and release intense impulses of compressed air into the water.

According to the U.S. -based Natural Resources Defence Council, seismic surveys have been shown to cause catch rates of some commercial fish to plummet – in some cases over enormous areas of ocean.

“What we are asking is for is the same thing every country in the world has asked for,” Aboud said, noting that the issue has become controversial enough that the International Maritime Organisation and U.N. Food and Agriculture Organisation (FAO) will convene a meeting in London next February to highlight ways of minimising the impact of seismic surveys.

FFOS also says a government-appointed committee is skewed heavily in favour of people closely affiliated with the energy sector here.

“Seismic surveys are routinely conducted as part of the exploratory process in an effort to obtain information on the location and the quantum of raw hydrocarbon in the various strata of rocks,” he said.

Maraj said that several studies have been done regionally and internationally, and documentation on the effect of seismic surveys on different species of fish can be found in a policy document titled “The National Seismic Operations of Trinidad and Tobago.”

“A draft version developed in July 2010 was circulated to committee members and other major stakeholders for comment. The policy document was also submitted to the Ministry of Energy for its consideration,” Maharaj said.

Critics argue that there should be a moratorium on seismic testing while the government creates a regulatory framework that will include making it mandatory for companies to submit an independently-conducted Environmental Impact Assessment (EIA) before testing.

He added that a judge in Mexico recently ruled “that you cannot do seismic bombing where the fishes are spawning (and) where there is a migratory path”.

The fisherfolk here have directed their anger mostly at British Petroleum (BP) and the state-owned Petroleum Company of Trinidad and Tobago Limited (PETROTRIN). Aboud said he has already started talks with the trade union movement here.

He also plans to hold talks with religious leaders in the hope they would empathise with what he called the “national plight” of the fishing industry.

But PETROTRIN has hit back, saying that its plans for an Ocean Bottom Cable (OBC) seismic survey was being undertaken in “conformance with the licence requirements” from the relevant authorities as well as putting in place “measures to ensure that the seismic survey is conducted in conformance with international safety and environmental best practices”.

In a full page-newspaper advertisement this week, PETROTRIN said that research has indicated that the “effects of seismic surveys on fish stock have indicated little or no negative impact” and that the mortality caused by air-emitting devices on fish eggs and larvae might amount to an average of 0.0012 percent a day.

“In comparison to the natural mortality rate of 5-15 percent per day, the seismic induced damage is insignificant,” the oil company asserted, adding “we stand by our statement that the decibel levels of the underwater pulses are similar to the naturally occurring sounds in the ocean.

“The sound from the survey does not exceed 250 decibels which can be compared to a ship sound, close to the hull, which emits 200 decibels and a bottlenose dolphin click which emits 229 decibels.”

At the start of the year, BP conducted a 275-million-dollar seismic study that the company’s regional president Norman Christie said “has given reason for even more confidence in the future of Trinidad and Tobago’s hydrocarbon industry.

“This survey will allow us to improve our understanding of our existing acreage to ensure we are maximising the recovery of the resources. The survey has stirred up quite a bit of excitement as it is the first time we are using this specialised seismic technology in the BP world,” he added.

“They are saying they are not using explosives. We never say they are using dynamite. We say that the air gun blasts are 260 decibels. A jet aircraft is 140 decibels and human ordinary pain is 130 decibels.

“We are also saying the seismic ships are using 20 to 35,000 individual air guns and each air gun is emitting almost double the sound of a single jet and is equivalent to sound that occurs when you use explosives,” he told IPS.