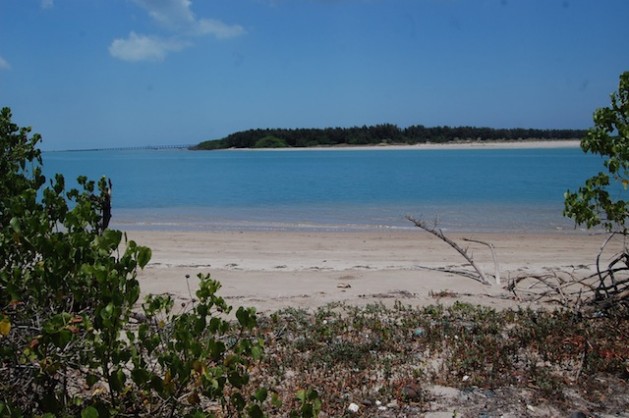 RAMESHWARAM, Jul 16 2012 (IPS) - One hundred and fifty years ago, the British colonial administration in India proposed a shipping canal project that would allow cargo vessels, commercial liners and large ships to cut through the Gulf of Mannar Marine National Park in the Palk Straits between India and Sri Lanka, thereby slashing 424 nautical miles (about 780 kilometres) off the traditional shipping route around Sri Lanka to the Far East.

Opposition based on ecological concerns, fear of heightened seismic activity in the region and cultural sensitivities stalled the project for over a century but it forced its way back onto the negotiating table.

The Indian Prime Minister finally inaugurated the Sethusamudram Shipping Canal Project (SSSCP) on Jul. 2, 2005 but it was contested in the Indian Supreme Court, which stayed the project in September 2007.

Earlier this month an expert committee headed by R.K. Pachauri, chairman of The Energy Research Institute (TERI), submitted a report to the Indian Supreme Court stating that alternative routes to the controversial SSSCP, which cuts through the historic Adam’s Bride in the Gulf of Mannar, are not viable.

The SSSCP will cleave through the protected Gulf of Mannar Marine National Park, allowing a shorter travel route for shipping tankers plying between the Middle East and the Far East through the Indian Ocean and the Bay of Bengal. 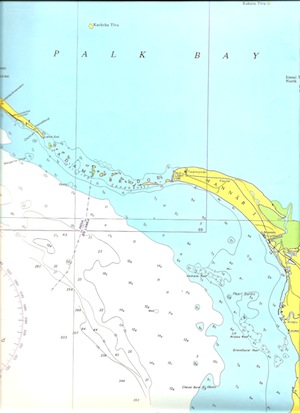 The area in white depicts the deep sea where no dredging is necessary for the shipping canal. The area in blue, south of the Adam’s Bridge, indicates the shallow waters of the Gulf of Mannar Marine National Park. Credit: Captain S. Viswakarma

It is estimated that ships from Europe and Africa sailing to the Far East may save up to 5000 dollars per voyage if they use the canal.

The shorter shipping canal is also expected to give a tremendous economic boost to small Indian ports like Tuticorin, Kanya Kumari, Nagapatnam, Ennore, Cuddalore, Thondi and the temple town of Rameshwaram.

More than 2000 ships will transit through the canal carrying more than 15 million tonnes of crude oil, and other internationally tradable commodities, leaving the marine park very vulnerable to oil spills.

“An important aspect of risk management relates to the possibility of oil spills which, even with the most stringent measures and precautions, would be difficult to rule out completely. The study clearly finds that oil spills could possibly pose a risk to the biosphere reserve, which needs to be protected under all conditions,” the expert committee report stated.

Staunch opponents of the project claim that dredging can destroy the shallow sea floor, disturb the shoal ecosystem, and ruin the habitat of rare and endangered species. The ecosystem in the National Park is comprised of shifting sand banks under the rocks, shoals and underwater reefs, all of which could be destroyed by the shipping canal.

In addition, there are no guarantees that the canal will survive another tsunami that could easily be triggered off the volatile coast of Sumatra, Indonesia.

Adam’s Bridge also has cultural and religious value, as Hindus believe that Lord Rama crossed it to rescue his kidnapped wife, Sita, from Ravanna in Sri Lanka. The so-called ‘bridge’ is comprised of a chain of limestone sand banks connecting India and Sri Lanka and has, over the years, been submerged by rising seas.

The expert committee report, which was compiled by members of the National Institute of Oceanography and the National Institute of Ocean Technology, states, “For infrastructure to be created in such a fragile ecological zone, a rigorous analysis of possible scenarios related to the impacts of climate change will be critical in decision-making that aims to minimise risk both in economic as well as ecological terms.”

The Gulf of Mannar is a fairly shallow ecosystem, thus necessitating extensive dredging both for construction and maintenance. Oceanographers believe that due to the high frequency of sand generation from the ocean floor, caused in large part by the shoal ecosystem in the shallow waters, constant dredging will be necessary to maintain a deep-sea shipping canal, making the project cost ineffective.

Additionally, the southeast coast of Tamil Nadu is highly prone to tsunamis, given that the bulk of seismic tsunamis in the past millennium have been triggered off the coast of Sumatra.

“Long gravity waves like tsunamis can diffract around islands and can have (a severe) impact in ‘shadow zones’ also; during the 2004 tsunami for instance, there was loss of life and significant damage on the west coast of Sri Lanka, even though the west coast was not facing Sumatra,” Dr. Tad Murty, vice president of the International Tsunami Society in Honolulu, told IPS.

Shekhar Kumar Niraj, field director of the Gulf of Mannar Marine National Park, told IPS, “SSSCP will also affect the marine wildlife here, most of which is coral-based.

“Coral comprises the basis of a fragile reef ecosystem, which provides a habitat for crabs, clown fish, dugongs, dolphins, porpoise, prawns, parrot fish, sea cucumbers, sea horses, sea snakes, turtles, whales and a whole list of highly endangered endemic marine wildlife. The marine diversity includes four species of shrimp, 106 species of crabs, 17 species of sea cucumbers, 466 species of molluscs, 108 species of sponges and 100 species of echinoderms. More than 2000 species of finfish are found in the Gulf of Mannar,” he added.

“The critically endangered green sea turtle lays its eggs all along the beaches of the Rameshwaram peninsula, which will undoubtedly be disturbed by the dredging,” Niraj warned.

The shallow sea is home to at least five sub-species of sea horses endemic to the Gulf of Mannar Marine Biosphere Reserve. Sea grass is clearly visible in the shallow sea, indicating the presence of dugongs, which are now only present in less than a dozen sites in South East Asia.

The project also threatens the safety of small fishermen whose nets will likely get entangled by large, passing ships.

“Small fishermen operate in the (early) hours of the morning so lack of visibility itself can be deleterious to the fisherfolk. Trawler fisherfolk too face the danger of ship collisions,” John Swamy, advisor on sea safety for the South Indian Federation of Fishermen Societies (SIFFS), told IPS.

The reef ecosystem is a very rich fishing ground for fisher folk from both India and Sri Lanka and will adversely affect their livelihoods as well. Tamil Nadu recorded a total of 68,397 metric tonne of marine products in 2008-2009 valued at 32.13 million dollars.

The shipping canal is also likely to decimate the trade in seashells worth at least 15 million Indian rupees or about 2.7 million dollars annually.

David, a traditional fisherman from Rameshwaram, told IPS, “With fish catch depleting and fuel costs only increasing, traditional fishing will die out with our generation.”

About 542 traditional fisher boats operate in and around the Rameshwaram Peninsula, and 3146 fishermen depend on these shallow waters. Their estimated fish catch amounts to an average of 226-279 tonnes per annum according to a study conducted by India’s federal Central Marine Fisheries Research Institute.

Many believe the shipping project epitomises the danger inherent in shaping the natural world to suit human needs regardless of long-term impacts on the environment, livelihoods of marginalised peoples and future generations.