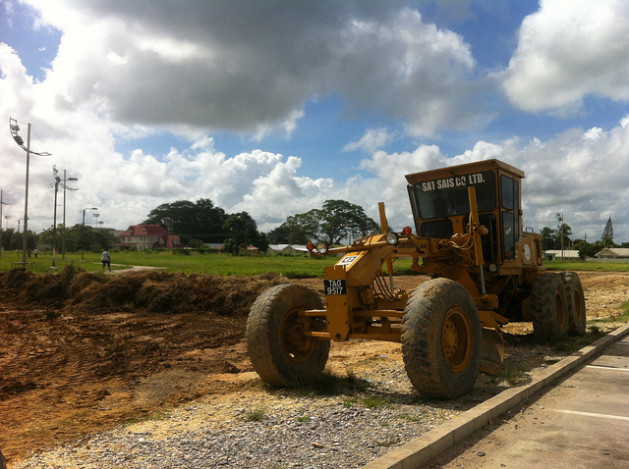 “This natural savannah plays a key ecological function in reducing flooding to surrounding communities, as surface waters are absorbed through grass fields into the aquifer providing a 24/7 water supply to thousands of households in east Trinidad,” Dr. Carol James, a retired United Nations policy advisor who specialised in sustainable development, told IPS.

"We have to do a simple thing and go in front of the tractors and let them run us over." -- Prof. Selwyn Cudjoe

James says plans by the government to build a multi-million-dollar sporting complex there “would spell disaster” for an area which many view as the lungs and principal water source of East Trinidad.

“Indeed, it is the only uncontaminated set of aquifers of this size anywhere along the east-west corridor responsible for supplying water needs of significant communities,” she said.

James added that nearby Aranguez “has already been contaminated with saltwater and pesticides due to a lack of critical planning in that ecologically sensitive water-storage area.”

The Orange Grove Savannah has served as a major sport and recreational space for an estimated 250,000 residents of Tacarigua and nearby communities for more than 125 years.

Peter Burke, chair of a group called Save our Green Space, told IPS, “London has its Hyde Park, New York its Central Park and Port of Spain its Queens Park Savannah. Orange Grove Savannah represents an oasis and mecca for hundreds of persons daily.”

In recent years, local residents have watched the savannah dwindle from its original 125 acres to 39, with the construction of several sporting facilities and private homes.

James said significant development in greater Tacarigua over the last 50 years has caused occasional serious flooding as the capacity of the savannah’s aquifer to absorb rapid runoff of water from roads, roofs and driveways has been compromised.

“Thousands of roofs shed water more rapidly than through vegetation, but with the existence of the savannah the severity of flooding disasters has been minimised,” she said.

“The community needs to understand, appreciate and protect this rich natural inheritance if its quality of life is to continue,” she told IPS.

Sports Minister Anil Roberts defends the decision to construct the community sporting complex, insisting that the project would actually enhance the green space.

“This facility is going to serve over 200,000 citizens,” he said on a recent television programme, denying that consultations were not held with the community.

Roberts said that the thousands of residents who signed a petition against the project had been misled by James and others because they were not told that what was being constructed would “enhance their sporting facilities and their family lives”.

“I would sign something that says do not take away my green space. It is not taking away anything,” Roberts said, noting that the project at Tacariqua is one of nine to be constructed across the country.

Meetings involving Save our Green Space, the Sports Company of Trinidad and Tobago and Minister Roberts have so far failed to forge a compromise.

“We are not opposed to this project at all but we are opposed to the site, given the history, given the impact it is going to have,” Burke insists. “We have a mandate from the residents of the area.”

Selwyn Cudjoe, a prominent lecturer and historian based in the U.S., is also vehemently opposed to the project.

“My family and I have lived all of our lives in Tacarigua,” he told IPS. “My great-grandfather, Jonathan Cudjoe, and my great grandmother, Amelia Cudjoe, were born in Tacarigua in 1833 and 1837, respectively. This means that my family has been a part of this community even before slavery ended.

“As a scholar, I have devoted my entire life to documenting the importance of Tacarigua and its savannah to the village, the country, and the world,” he said.

In 1995, to mark the 350th anniversary of Tacarigua’s founding as a village, Cudjoe wrote the book “Tacarigua: A Village in Trinidad” arguing “about the importance of our common green space that is so necessary for the mental, physical, and aesthetic development of our people.

“We have had many fights to maintain our green spaces,” Cudjoe told IPS.

“We are saying we do not want this and the government is saying in spite of what we say, they are our bosses. Then we have to do a simple thing and go in front of the tractors and let them run us over,” he said.