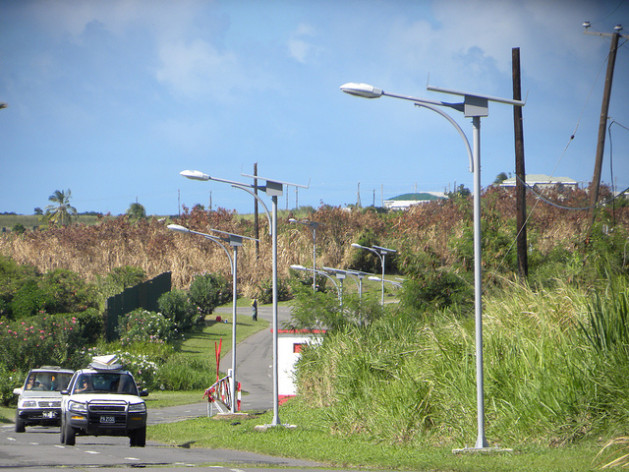 Dr. Al Binger, technical coordinator for the recently launched multi-million-dollar Energy for Sustainable Development (ESD) in Caribbean Buildings Project, said that the region must now focus on ways to reduce the amount of fuel used to generate electricity, and in the process save millions of dollars.

He told IPS that building modifications, such as replacing windows and doors, installing solar water heaters and other retrofitting activities, are among the major components of the EDS project, which he hopes will eventually be embraced by all 15 members of the Caribbean Community (CARICOM).

“Improving the efficiency of energy use in the building sector is a project priority. We’re looking for a 10 to 15-percent improvement across the whole electricity sector in this pilot project, which means we could save the equivalent of about 400,000 dollars per year for the pilot project [in five countries]. So you see, energy efficiency pays back quickly. It’s a good investment,” he told IPS.

Belize will be the first to begin implementation of the ESD project, which seeks to slash greenhouse gas emissions by 20 percent in the near term and increase the use of renewable energy.

Antigua and Barbuda, Grenada, St. Lucia, and Trinidad and Tobago are next in line to participate in the four-year, 12.4-million-dollar project that was launched by the Belize-based Caribbean Community Climate Change Centre (CCCCC) this week.

“The participating countries expressed interest in collaborating, which is exceptional as countries usually do these activities individually,” said the CCCCC in a release, noting that each country will establish a national steering committee, a project manager and an executing agency.

The centre says the EDS project will do a range of things to support the Implementation Plan, the landmark policy document that guides the Caribbean’s climate change response. This includes boosting capacity to perform audits, introducing new building codes, labelling appliances as energy-savers, and creating best practices for how the private sector can reduce its energy consumption.

A major focus is resilience, and helping economies adapt to new weather conditions.

Binger noted that Jamaica, for example, had to give up its banana industry after 100 years because it became unsustainable due in part to climatic changes.

“Jamaica built an entire railroad just to grow banana… So the Implementation Plan is about the economy of tomorrow, what will it look like, and that starts with the energy sector,” he said.

Earlier this month, the architect Brian Bernal, addressing a workshop hosted by the Jamaica Institute of Architects in association with the Caribbean Architecture Students Association of the University of Technology (UTECH), said that overhauling the island’s energy use profile would not be enough to protect it from rising sea levels, increased air temperature and more intense storms and hurricanes.

He argued that the effort has to be coupled with a deliberate move to ensure that buildings can withstand the anticipated shocks.

“We need to change the way we use energy resources to reduce our CO2 emissions, while simultaneously increasing our ability to resist the effects of climate change,” Bernal said.

“Robust and enforced building codes are highly effective in ensuring a better quality of building and when employed in conjunction with green building standards or practices will significantly increase the functional resilience of our buildings,” said Bernal, whose company serves as the lead consultant of the multi-disciplinary team for the “Build Better Jamaica — Developing Design Concepts for Climate Change Resilient Buildings project”.

That project is sponsored by the Inter-American Development Bank and the Institute of Sustainable Development and is aimed at helping Caribbean countries prepare for climate change, particularly in the design and construction of buildings that are more resilient to disasters, but which do not compromise the natural environment.

The CCCCC said that the main aims of the ESD project, the “first regional project of its kind in CARICOM”, are to increase the number of successful commercial applications of energy efficiency and conservation in buildings as well as expand the market for renewable energy technology applications for power generation.

“We will be primarily using photovoltaics, [and] some wind energy to a lesser extent,” said Binger.

At a 2010 Caribbean conference, the Climate Studies Group at the Mona campus of the University of the West Indies (UWI) in Jamaica, noted that small-scale wind for domestic use offers an advantage over total reliance on grid-supplied electricity if net metering is allowed and also for standalone systems where the wind is fairly consistent.