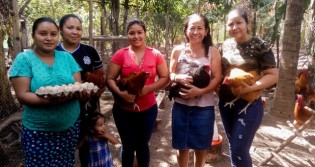 By Edgardo Ayala
Julio César Cordero’s American dream didn’t last long. He was trying to reach Houston, Texas as an undocumented immigrant but was detained in Acayucán in southeastern Mexico. And like thousands of other deported Salvadorans, he doesn’t know what the future will hold.

By Lucy Westcott
As the debate on immigration reform continues in the Senate and fractured talks persist about the future of 11 million undocumented migrants, one New York-based group took to the streets to ask their senator a question.