WASHINGTON, Aug 21 2012 (IPS) - Deportation is a devastating experience for a family, breaking it apart and leading to emotional and mental stress for its members. But a new report from the Centre for American Progress shows that such duress extends beyond families and into the larger community as a whole.

The report, “How Today’s Immigration Enforcement Policies Impact Children, Families, and Communities: A View from the Ground”, was put together by Joanna Dreby, a sociology professor at Albany University, and points to the short- and long-term effects that the deportation of illegal immigrants has on both family units and wider society. 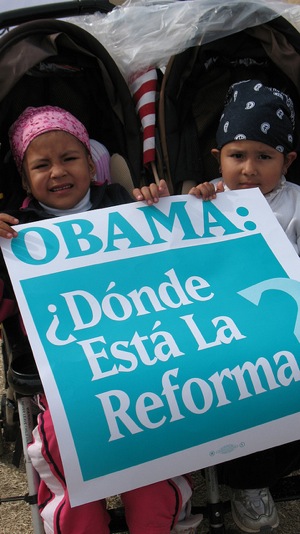 Although U.S. President Barack Obama recently enacted legislation that would allow children who were raised in the United States to apply for legal immigration status, deporting their parents continues.

Meanwhile, more than 16.6 million people in the United States currently live in “mixed status” families, in which one or more members is an undocumented migrant. A third of immigrant’s children live in such mixed-status families.

For all parties involved, the effects of deportations on these families are emotional, psychological and economic.

Seth Freed Wessler, investigative reporter for the Applied Research Centre, a racial justice think tank, believes that “kids do better when they’re with their families”. During a discussion of the report at the Centre for American Progress here on Monday, he recounted tales of the separation of families, stories he characterised as “horrific”.

“When I interviewed these women, what I found was that once you have been deported, the child service agencies act as if you have fallen off the face off this earth,” he said. “There are very slim chances of reunification of children with their families.”

When parents of U.S. citizens are deported, their children are generally put into foster care. It may take years before they are able to reunite with each other. According to the report, every child that goes through the foster care system costs taxpayers 26,000 dollars.

“Every single parent I interviewed wants to stay here. They came here for a better life; they want to contribute to society, and they came here for their kids,” said Wessler, who believes that taking one’s children back across the border creates difficult adjustment issues for the children, who may not even know the native language.

Miriam Yeung, of the National Asian Pacific American Women’s Forum, recounted stories of mothers separated from their children while still breastfeeding. “In most cases, the man gets deported, leaving a single mother with her kids,” she said at the presentation. “This mother may never have worked before, and she now has to find employment right away.”

This is a vicious cycle, Yeung believes. If the mother cannot find work immediately and is herself undocumented, it may lead to self-deportation (when the family moves back to their original country) of the entire family.

While this may be relatively easy for the parents, children who are U.S. citizens may struggle to adjust. They may not know the language or find it hard to fit in culturally, which can result in emotional distress as well as poor performance in school.

Ajay Chaudry of the U.S. Department of Health and Human Services interviewed 200 children, as well as officials with children’s services agencies and police and immigration officials, across seven states. He found that immigrant children lived in perpetual fear of being separated from their parents.

Of those who had been separated, there were lags in development and well-being, and often great economic repercussions. One woman he interviewed had moved eight times with her children after the deportation of her husband.

In addition, 42 percent of families with a deported member moved more than once in the first few months after the deportation.

Dreby’s report also touched upon a fundamental problem that seems pervasive in immigrant communities. Immigrant children are often afraid of the police and view them in an extremely negative light.

They believe police officials are the same as immigrant officials, and often think that being an immigrant automatically makes you an illegal alien. They have also started thinking of the word “immigrant” as something dirty, and Dreby believes this serves to disassociate oneself from one’s own heritage.

“I interviewed a nine-year-old girl, and I asked her, what it was like being an immigrant?” Dreby said. “Her reply shocked me. She said that it was sad to be an immigrant, because she had seen a show on TV in which the police came and took the girl’s parents away, and the girl was left alone in a car.”

For Dreby, the answer is simple. The United States needs legalisation programmes that prevent parents of U.S. citizens from being deported.

Yeung also believes that public perception as to what constitutes an “American” family needs to change.

“We are a country of immigrants,” she said. “What makes an American family, really?”