Stories written by Apostolis Fotiadis
Apostolis Fotiadis writes for IPS from Athens. He has been covering political issues, particularly migrants’ rights as well as ethnic conflict and population movement in the Balkans. Since 2004, Fotiadis has also written for the national Greek daily Kathimerini and been published in various other regional newspapers. He received his education in history at Aberdeen University and has an interdisciplinary master’s degree in nationalism. | Twitter | 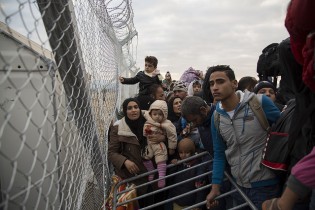 By Apostolis Fotiadis
Scientists and local communities are expressing serious concern about the ongoing destruction of Syria’s chemical arsenal on board a vessel in international waters in the Mediterranean Sea.

By Apostolis Fotiadis
A humanitarian crisis is unfolding in Greece and other recession-hit European countries as they undergo harsh austerity measures in exchange for a bailout. At the heart of it is the Troika, say trade unions, civil society and rights activists.

By Apostolis Fotiadis
Faraj Alhamauun, a Syrian national now residing in Istanbul, was detained while crossing Greece, in the hopes of heading north, last September.

By Apostolis Fotiadis and Claudia Ciobanu
The European Union is implementing a new border management system with tougher migration control the core aim. Major security and weapons companies are already reaping the benefits.

By Apostolis Fotiadis
Ignoring the thousands of protestors gathered outside the Greek parliament on Wednesday, the government voted in public spending cuts amounting to 17 billion dollars in an economy already on its knees from a lacerated budget.
Next Page »
ADVERTISEMENT ADVERTISEMENT