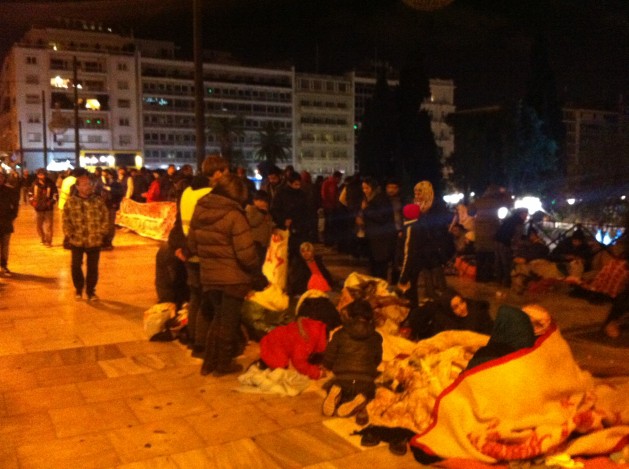 Sit-in of Syrian migrants in Athens, demanding that they be granted permission to move on to other European countries. Many of them are sleeping rough on the ground during the night, covered only with blankets to face temperatures under 10 degrees Celsius. Credit: Apostolis Fotiadis/IPS

ATHENS, Nov 29 2014 (IPS) - A sit-in protest by Syrian refugees on Syntagma Square opposite the Greek parliament in the heart of Athens has turned into a demonstration of the stalemate faced by both Greek as well as European immigration policy.

About three hundred men, women and children have been on the same spot for over a week now, demanding that they be granted permission to move on to other European countries to the northwest of Greece.

“Given that the refugee population will keep increasing, it is necessary to identify appropriate policy initiatives to promote integration now. This is necessary both for refugees as well as for social cohesion in Greece” – Giorgos Tsarbopoulos, Head of the UNHCR Office in Greece

Many of them are sleeping rough on the ground during the night, covered only with blankets to face temperatures under 10 degrees Celsius. Tens have already been transferred to hospital to be treated for minor symptoms, mostly due to hypothermia. Medical incidents have increased after many of the protestors decided to start a hunger strike six days ago.

Throughout the protest, the Greek authorities have been communicating with them, repeating the official line that there exist no legal provisions for travelling to other European countries unless they have formally acquired refugee status.

However most of the Syrians taking part in the sit-in appear unwilling to apply for asylum in Greece.

They have refused to do so even after it was made clear to them that asylum would be granted to them with fast track procedures. This would help secure the travelling documents, which they desperately want, but at the same time would deprive them of the right to seek asylum in other European countries in which refugees enjoy access to better integration services.

Indeed, the Greek authorities are facing a unique situation. The Secretary-General of the Ministry of Interior, Aggelos Syrigos, told IPS from Syntagma Square where the protest is taking place that the situation seems irresolvable. “We explained to them that what they ask is not possible. We advised them to apply for asylum, so we can offer shelter to families. Many of them seem to believe that other Europeans can intervene to resolve their problem, which is not the case,”

Some years ago, when Greece was receiving mostly economic migrants, the country implemented a policy that limited access to asylum claims because irregular migrants were abusing the system. 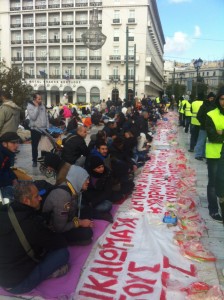 Syrian migrants protesting in Athens. About three hundred men, women and children have been on the same spot for over a week now, demanding that they be granted permission to move on to other European countries. Credit: Apostolis Fotiadis/IPS

The crisis transformed the country into a non-desirable destination for refugees and migrants. Now it appears to be the authorities that are pushing refugees, which are the vast majority of arrivals these days, to enter the system and claim asylum.

The change in policy came after the authorities established an effective asylum system in cooperation with UNHCR, the U.N. refugee agency, and after pressure from the European Commission on the country’s authorities.

But this change of policy has not been followed up by establishment of the effective integration services and infrastructure that the country needs.

A recent reportby the Hellenic Foundation for European and Foreign Policy (ELIAMEP) on the cost-effectiveness of irregular migration control policy in Greece between 2007 and 2013 shows that Greece has prioritised an expensive system of border controls, detention and returns.

It has invested most of the available resources from European funds and the national budget in such a system at the expense of a less costly and more proactive system without such punitive measures. As a result, it now lacks facilities that would help manage new waves of arrivals.

The Head of the UNHCR Office in Greece, Giorgos Tsarbopoulos, told IPS that Greece never really attempted to implement an integration policy in the first place, but now, “given that the refugee population will keep increasing, it is necessary to identify appropriate policy initiatives to promote integration now. This is necessary both for refugees as well as for social cohesion in Greece.”

Tsarbopoulos believes that the government’s decision to precondition any protection offered to Syrian protestors on first applying for asylum might prove counterproductive by polarising the situation.

Many Syrians who come from an urban middle class background understand that claiming asylum in Greece will connect them to a future that leads to social marginalisation, a situation that they clearly find very difficult to accept.

A few nights ago, this correspondent was party to a conversation between Mohammed A., who has been sleeping rough in Syntagma Square since the beginning of the sit-in, and a Greek man, both of the same age.

The conversation ended with the Syrian saying: “I don’t want anything from Greece. What I want is just to be able to go where I want. You can go anywhere you want. I want this too.”

Both Syrigos and Tsarbopoulos agreed not only that the issue will deteriorate but also that the time frame for adequate solutions is limited.

According to the latest official Greek estimates, more than 5000 Syrians entered Greece last month and just a few days ago Greece sent a military search and rescue operation south to Crete to save an immobilised container ship believed to be carrying about 700 refugees.

The Greek Council of Refugees issued a response to the government’s position to push Syrians to submit asylum applications. According to the organisation, the asylum process “should not be a tool and a prerequisite for the provision of material reception conditions and immediate humanitarian assistance to people fleeing war conflicts”.

In an analytical press release circulated by UNHCR Greece five days ago, Europe is being urged to open legal pathways for refugees and start a dialogue on a Europe-wide refugee solution that puts the emphasis on solidarity among the European Union’s member states.

For two years, the Greek government, together with Italy and Malta, has repeatedly been asking the European Council to discuss responsibility-sharing between member states in the north of Europe and those in the south, but this has not yet happened.