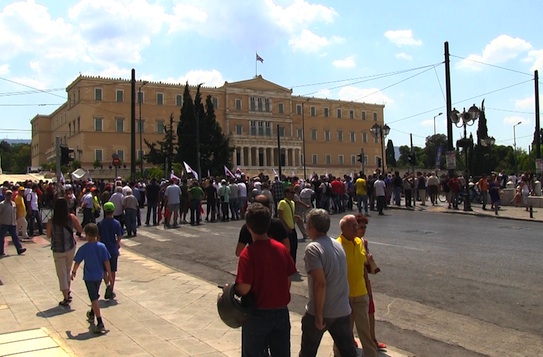 A demonstration outside parliament against austerity measures. Credit: Apostolis Fotiadis/IPS.

ATHENS, Aug 9 2013 (IPS) - Greece has started unravelling its civil sector further in an attempt to persuade the Troika – the European Central Bank, the International Monetary Fund and the European Commission – to commit more bailout money by next October.

Prime Minister Antonis Samaras has ordered his ministers to rush the dismantling of ineffective public structure and to provide lists of people to be fired or suspended. Suspension means a waiting period of eight months during which 75 percent of wages are paid. At the end of the period the employee is sacked unless another position has been created to fill.

The sudden closure of public television in June was a first step in this direction; 2,000 workers were fired. Technical schools providing career opportunities to low income family kids have been abolished, and another 2,000 teacher jobs suspended. In all 2,200 school guards and 3,500 municipal police have also been suspended.

Themistocles Kotsyfakis, a teacher in a technical school for the manufacture of medical equipment, has found himself on the suspension list. “This is not reform, no study has been provided for the results of these measures, and no evaluation has taken place regarding who will go and who will stay,” he told IPS.

“Many of us will be fired, [no one] has guaranteed anything for our future and [no one] has provided an estimate of where we could be transferred. Suspension is a step that leads to unemployment.”

While the government strives to reach the agreed quota, minister for health Spyridwn Georgiadis has shortlisted six ineffective hospitals in the broader Athens area for closure. About 1,250 medical staff will be suspended.

Xaralampos Farantos, a surgeon at the General Hospital in Patisia, downtown Athens, which is on the list, told IPS that the ineffectiveness the minister refers to has been artificially created.

“All these shortlisted hospitals have been left without adequate medical personnel for a long period of time, due to previous agreements with the Troika regarding employment in the civil sector,” he told IPS.

“The hospitals then opted out of the emergency services scheme and because of new fees for admission and treatment (an austerity measure), patients avoided them.

“Then the new smaller numbers of admissions were interpreted as proof of our ineffectiveness and became the reason for our shortlisting. A dishonest method indeed.”

After the hospitals, the government is eyeing three underdeveloped military companies and a public nickel producer for liquidation or privatisation. That will add another 2,000 fired workers to its quota.

The en masse sacrifice of civil sector jobs comes amid warnings that the Greek fiscal consolidation plan is not going to work. The IMF has admitted mistakes and miscalculations over the cost of austerity and its capacity to bring the economy back on track.

“Many of us will be fired, [no one] has guaranteed anything for our future and [no one] has provided an estimate of where we could be transferred. Suspension is a step that leads to unemployment.” -- Themistocles Kotsyfakis, a teacher in a Greek technical school

The fund admitted in May that it had breached three of four of its key guidelines in joining the European Union-led rescue package, and that the measures were mostly designed to win time to rescue the euro instead of helping Greece recover.

The current bailout package set aside for Greece will run out of cash around spring 2014. The country will still be in disarray then, with unemployment above 30 percent. The economy will have contracted more than 27 percent since the beginning of the crisis.

The future of Greece is meanwhile sliding into brinkmanship among western leaders. While the IMF and the U.S. have advocated more development and job creation policies possibly including a major debt write-off, Europe under German leadership stands still in favour of austerity.

Concerns are spreading fast that the Greek state might implode under the burden of austerity, and analysts suggest that Germany and the European Union have a Plan B. This would include transferring basic state functions and policy making to representatives of Greece’s international creditors.

Political analyst Giannis Kiboyropoulos told IPS that the first obvious sign of such a scenario was circulated end of July in a report by the Kielo Institute for the World Economy.

“German technocrats, after mentioning an obvious danger of the collapse of reforms in Greece propose a debt committee independent of political pressures that would handle public administration, the labour market, privatisations, transport, energy, the retail market as well as entrepreneurial policies,” Kiboyropoulos said.

He said that as these scenarios emerge “the Troika’s representatives in Greece have warned of extending their control over institutions responsible for privatisations and banks recapitalisation. One should not treat this as a mere coincidence.”