ATHENS, Jun 30 2011 (IPS) - The mass protests in Greece swelled by the hour as parliament voted this Thursday to implement the social and economic adjustment plan approved Wednesday, including measures for privatisation, tax hikes, spending cuts and mass lay-offs in the state sector. 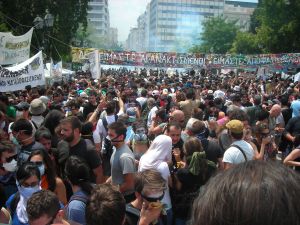 The increasingly disappointed and restless crowd continued to demonstrate in the streets of Athens against the new Medium Term Fiscal Strategy 2012-2015, that will seriously affect middle- and low-income families and was approved at the insistence of the European Union and the International Monetary Fund (IMF).

A prime target of the protestors’ wrath is German Chancellor Angela Merkel. “She is to blame for handing Greece over to the speculators,” said Nikiforos, one of the thousands of demonstrators gathered in front of the parliament building in Syntagma Square. “We must carry on demonstrating and organise a united social movement in Europe.”

Konstantine, a physics student at the University of Athens, said: “The situation for workers is tragic, as they are on the edge of levels of genuine poverty.” “University matriculation used to be free, but it now costs 800 euros (1,161 dollars). Schools are being closed, and public transport fares have risen by 40 percent,” she told IPS.

For his part, Alexander, a psychologist and teacher of children with disabilities who belongs to the Front of the Anti-Capitalist Left (ANTARSYA), told IPS the government “wants to sell the country out to the IMF in order to save the bankers.

“Do they want to strangle us even more? We won’t let them,” he said.

In spite of the pressure exerted by a two-day general strike, the crowds of demonstrators surrounding parliament and the clashes with police that have left dozens of people injured, parliament narrowly passed the new adjustment plan Wednesday, with 155 votes in favour, 138 against and five abstentions. Only one lawmaker of the rightwing opposition New Democracy party voted with the governing Panhellenic Socialist Movement (PASOK).

Panayotis Kurublis, the sole socialist lawmaker who voted against the austerity programme, was immediately expelled from the party, further narrowing the government’s parliamentary majority.

Kurublis and the opposition appear to agree with over 80 percent of Greeks who in various polls rejected the stringent austerity plan and said they were totally against “selling their country at the diktats” of the so-called “troika” of the EU, the European Central Bank and the IMF.

Following the approval of the plan, a condition laid down by the troika for proceeding with the second phase of a financial bailout, the government of Prime Minister George Papandreou will have to implement a vast privatisation programme this year.

“We must prevent the country’s collapse at all costs,” said Papandreou ahead of the parliamentary vote. The passage of the austerity plan freed up the payment of the next tranche of 17 billion dollars out of a bailout loan totalling 157 billion dollars that was approved in May 2010 by the EU and IMF.

The new austerity package – the second since March 2010 – aims to make savings of some 28.4 billion euros (over 40 billion dollars) between 2012 and 2015 from tax hikes and public spending cuts. The government’s target is to reduce the deficit to below three percent of GDP in 2015.

An estimated 45 billion euros (65.3 billion dollars) of revenue during the same period is expected from the total or partial sale of dozens of public enterprises, such as state-owned refineries, power stations, ATEbank (a largely agricultural bank), as well as management concessions for airports, highways and ports, mining rights, real estate and land.

A “solidarity tax” has been introduced which will be a one-off levy of one to five percent of personal incomes, with the highest rates being applied to the highest income brackets. The minimum taxable income threshold will be lowered, although earnings of workers under 30 and pensioners’ incomes will remain tax-free.

Value added tax in bars and restaurants will be raised from 13 to 23 percent.

Despite the draconian nature of the austerity plan, international analysts are sceptical of the results it will bring for the country, which is on the brink of default. Meanwhile, popular discontent is growing and further unrest is feared.

The two-day general strike, in which all the unions joined with a very high participation rate, was a clear sign that Greek citizens are not prepared to accept more spending cuts and higher taxes.

The last straw could be the decision to eliminate 150,000 of the current 700,000 public employee posts. The government intends not to renew the contracts of temporary workers, tantamount to dismissal, and to replace only one in 10 public officials who retire.