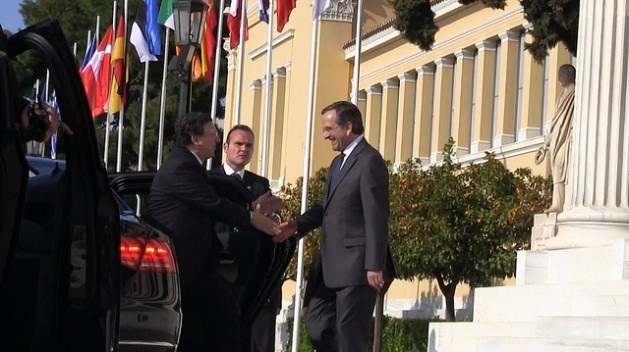 ATHENS, Jan 8 2014 (IPS) - The start of Greece’s six-month presidency of the EU was marked by a ceremony Wednesday in the Greek capital attended by the EU commissioners. But protests were banned and there was no in-depth talk about the raging controversy over the bloc’s handling of the Greek debt crisis and the renewed concerns about the vitality of the Eurozone.

In May 2010, the Eurozone countries and the International Monetary Fund (IMF) agreed on a 110 billion euro bailout for Greece, conditional on compliance with severe fiscal consolidation, privatisations and economic reforms to bolster competitiveness. A second bailout of 130 billion euro with a debt restructure followed in February 2012, with additional austerity measures.

The recipe soon mutated into a scorched earth policy. Greece entered its seventh year of recession in 2014, with unemployment hitting a historical high of 28 percent and youth unemployment surpassing 65 percent – up from seven percent when the austerity measures began to be implemented.

In June 2013, the IMF – part of the so-called troika of international creditors overseeing implementation of the austerity policies in Greece, along with the European Commission and European Central Bank – admitted mistakes in handling the Greek debt crisis.

Deregulation of the labour market, severe taxation of the labour force and reforms of the health sector have cut so deeply through the social fabric that many are wondering whether austerity has caused a humanitarian crisis in Greece.

According to Greece’s statistics agency, by late 2012, austerity measures had shrunk the labour market by 20.8 percent – 870,000 jobs were lost since 2009 – and had taken more than 40 percent of the labour force out of the national insurance system.

Lee Buchheit, a globally acknowledged legal expert involved in the debt restructure accompanying the second bailout for Greece, told IPS that the Eurozone debt crisis is not over yet.

“It is worth remembering that with the single exception of Greek PSI [private sector involvement], not a single euro of the debt of the afflicted countries [Ireland, Portugal, Spain and Greece] has been written off. Each of those countries will be emerging from their bailout programmes carrying debt loads far heavier than when they entered the programmes.”

What has changed, Buchheit says, is the identity of the lenders. “The original private sector bondholders have been paid back in full and on time through new borrowings from official sector sources [the EU and IMF]. So the taxpayers of the debtor countries remain entirely on the hook for the repayment of those debts; they will just be paying them to a different set of creditors.”

Changing the identity of the creditor does not solve the debt problem, he said. “A sustainable solution would require either a reduction in the size of the debt loads or significant growth in the economy of the debtor countries, or both. Unfortunately, neither of those things has yet happened in the Eurozone periphery.”

But instead of considering a change of course to stimulus economics, European – most notably German – leaders are refusing to accept the failure of austerity. On the contrary, they have speculated that any extra help for Greece will come in the form of another bailout package.

Economist Philippe Legrain resigned last month from the Bureau of European Policy Advisers, an advisory body to the president of the European Commission. A week after his resignation he delivered a speech in Athens blaming European leaders for postponing an inevitable default at great social cost.

“I think Greece cannot pay back its debts in full. So the questions are not whether Greece’s debts will be written down, but when and how,” he told IPS in an email interview. “As of now, I think it will happen little by little and that it will take the form of lower interest rates and longer repayment terms rather than writing down the principal of the debt, to preserve the fiction that the debt is being repaid in full.”

Despite increasing concerns about society imploding, the Greek government insists on its optimistic scenario that foresees a return of the country to positive growth rates in 2014. The Finance Ministry has repeatedly reassured that Greece will mark a 0.6 percent primary surplus and will successfully return to the credit markets by the end of 2014.

Its optimism has been met with disbelief. The Organisation for Economic Cooperation and Development’s (OECD) forecast of a 0.4 percent contraction contrasts with the Greek government’s projection of 0.6 percent growth this year. The European Commission has predicted a Greek return to the markets in 2015.

In a scathing editorial this week, Germany’s Der Spiegel magazine described Greek Prime Minister Antonis Samaras as “out of touch with reality.”

Meanwhile, Samaras’ coalition government, expected to face a huge protest vote in the European elections next May, has no alternative but to carry on with a painful reform of Greece’s primary care sector, suspending 1,000 doctors and 8,000 administrative jobs, many of which will eventually be lost. This will make up the bulk of the 15,000 jobs the Greek government has to suspend in 2014, under its austerity obligations.

The reform will transform the biggest insurance fund in the country from a service provider to a purchaser in the private health market, with many accusing the government that the real aim is not the creation of a more effective system but the indirect privatisation of primary care which will exclude hundreds of thousands from any kind of medical coverage.

“Austerity politics are a mistake,” says cardiologist George Vichas, the spirit behind a major parallel grassroots health structure, the Metropolitan Community Clinic at Helliniko, that has treated 20,000 uninsured people in its 23 months of existence.

“But those who implemented them have not made a mistake. These results are exactly what they aimed at and what they believe in. They have experimented on Greece the last four years, but now the first signs of health sector deregulation have started appearing in Britain, France and Italy. This is Europe’s future.”