Greeks Discover the Politics of Poverty

ATHENS, Feb 16 2012 (IPS) - According to European mainstream economists and politicians, the solution to the Greek debt crisis, and the only option for returning the country to a path of progress, is ‘fiscal consolidation’. 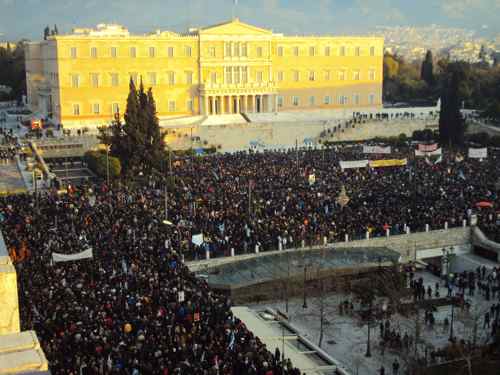 But for the Greek masses, the word ‘austerity’ has meant the demise of labour, economic and human rights and the dismantling of an inefficient yet crucial social welfare system.

In a last ditch attempt to secure an additional bailout loan of 130 billion dollars from the Troika (a mechanism comprised of the International Monetary Found, the European Central Bank and the European Commission), Greece has capitulated to the austerity plan forced upon it by the international community, hoping to escape bankruptcy.

Workers under 25 years of age have been asked to take a bigger – 30 percent – salary cut.

Parliament ushered in the fresh ‘bout of austerity’ on Feb. 12 amid increasing violence across the city. Mobs of newly impoverished Greeks took to the streets, setting Athens ablaze and offering yet another spectacle to the international media.

Meropi Andriopoulou, a medical officer involved in the national health system since 1989, who often joins the demonstrators, believes that ordinary Greeks only stand to lose more from the neoliberal structural adjustment policies (SAPs) imposed on the country.

“Greece was a country with universal healthcare. Now, many of the people who show up in public hospitals can’t even afford the five-euro general admission fee introduced two years ago. Ten percent of patients don’t even have insurance,” she told IPS.

“Spending your days in a public hospital (highlights the degree of) social exclusion. Our healthcare system has collapsed and there is no political will to get it back on track,” she added.

Having taken a salary decrease of over one thousand euro herself, Andriopoulou, a mother of two, decided to join ‘Doctors of the World’, a volunteer team in the remote Athenian district of Perama, which has weathered unemployment rates of nearly 50 percent since the collapse of the local vessel reconstruction port.

“You can’t imagine that this kind of social exclusion exists until you show up there,” Andriopoulou told IPS. “Moreover, I was surprised to see that most volunteers were unemployed doctors or people under serious financial hardships themselves.”

“Like many of them, I don’t believe in philanthropy, I believe that poverty is a social issue, not the result of bad fate. I have spent over two decades working for the National Healthcare System, which I believe has been the victim of clientelism and political interests. The only response to it is a political one,” she added.

On Feb. 8, Eurostat published a report estimating that 27.7 percent of the active workforce, aged 18-64 years old, currently lives on the poverty line.

The rapidly increasing numbers of homeless people sleeping around central Athens prove that this report is not unfounded.

Over the last two weeks, rising homelessness has caused friction between socially active citizens and the municipality, as sub-zero temperatures compelled authorities to take urgent action to prevent people from freezing to death.

Giorgos Apostolopoulos, the deputy mayor responsible for the homeless food centre of Athens’ municipality, admitted that over the last few months, urban social infrastructure has been stretched to its limit trying to provide for the needy.

Various NGOs focused on poverty reduction and homelessness, many of which attacked the mayor on political grounds last month, have since stepped in to fill the state’s distribution gaps.

Among scores of volunteers was Tonia Katerini, an architect active in the civil rights movements through Open City, a leftist municipality organisation who believes the issue of poverty is severely politicised in Greece.

“The municipality, in cooperation with private entrepreneurs, plans to open big hotels that had previously been shut down because of the crisis and transform them into one-night shelters.”

She believes this process will be fast-tracked and happen in a non-transparent manner, raising questions about how municipal authorities open up space to private entities and tackle social issues like poverty.

“Furthermore, the ministry of health has moved to prohibit the distribution of food by ‘unlicensed’ groups of people. They say this is because of ‘hygiene standards’ but it’s obvious that the issue is about controlling who will get involved with the exploding (crisis) of poverty in the capital. While the poor and needy multiply, the well-connected will discover new fields of business,” she said.

Katerini predicted that the number of people in need of shelters would continue to grow throughout the year.

SAPs have caused the Greek economy to contract by about four percent, though the rate of decline could increase to seven percent in the near future, analysts say.

This would add thousands more to the ranks of the unemployed, which swelled to over a million Greeks last October.

However, two years ago, ex-finance minister George Papakostadinou – the man responsible for initiating the austerity reforms – described the spring of 2011, which saw scores of workers dismissed from their jobs, as the moment when the country would experience recovery and “growth”.

Goerge Barkouris (62), who found himself homeless for the first time in his life during the massive wave of unemployment in 2010, lost his home last November.

Barkuris had worked for over 25 years in music and radio production but lost a contract with the public sector due to cuts in 2001. He then worked as a freelancer until 2008, but “when the crisis hit it was impossible to make money to pay for my house,” he said.

He has now found shelter in Klimaka’s hostel for homeless people in exchange for contributing to its street work programme, which consists of riding Klimaka’s van around the streets of Athens, handing out food and other assistance to people in need.

While discussing Greece’s sudden conversion to a country of mass impoverishment, he expressed opposition to the prevailing political and economic order.

He says the politicians presiding over the crisis “are not stupid. They know what their politics are going to do to the rest of us but they do not care about their people anymore.”

“I was lucky to find this solution but for many others the physiological pressure is intolerable. The days out in the street are long and hard and the nights are full of fear. I have experienced very few days of (despair); the thought of people who are out there for years makes me wonder how they manage to deal with it,” Barkuris said.

“I cannot describe what one sees out there in the streets of Athens during the night, the violence, the deprivation, the dehumanisation.”