LISBON, Jan 25 2013 (IPS) - Poverty in Portugal has risen to levels that were unimaginable a year ago despite the bleak outlook forecasted by the harsh measures imposed by the troika of creditors in exchange for the country’s financial bailout. 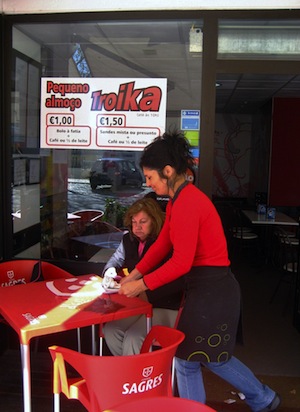 Unable to pay their bills or even meet basic food needs, thousands of families are facing dire times and turning increasingly to charities for assistance. Many do so secretly, however, ashamed to admit they have to resort to such means to get by.

The phenomenon has become so widespread that the impoverished middle class is starting to be known as the “embarrassed poor”.

This new poverty, caused by unemployment and the inability to repay bank loans, is also driving up the number of suicides, according to reports by Caritas, Food Bank and other social solidarity organisations.

According to figures from the National Statistics Institute, in 2012 a fifth of all Portuguese were living on less than 478 dollars a month, well under the minimum wage established by law at 644 dollars a month and 14 salaries a year.

In June 2012, a year after the troika – comprised of the European Union (EU), the International Monetary Fund (IMF) and the European Central Bank (ECB) – stepped in with a bailout package, soup kitchens have sprung up across Lisbon, bringing back the “sopa dos pobres” served out by Catholic organisations to feed the poor in the 1950s.

Today long lines of people can again be seen queuing outside charity centres waiting to receive their only hot meal of the day.

Teachers around the country report alarming cases of middle-class children coming to school on an empty stomach, dizzy and even fainting from hunger, but trying to act normal so as not to be confused with poorer children.

Middle-class Portuguese people of all ages are finding it hard to accept the fact that their dream of attaining the upper middle-class status they had been working towards for the past two decades is slipping away.

Those efforts are, in fact, having the opposite effect, experts say. Buried under a mountain of unpayable debts, the middle class is sinking closer and closer to the lower class, which at 24.4 percent has increased two percentage points since 2009, in a population of 10.6 million.

According to the National Statistics Institute anyone with an income between 768 and 2,660 dollars a month is considered middle class, in a country where half the population earns less than 932 dollars. Officially, around 60 percent of the population falls within that definition.

After a decade on his own, enjoying a high standard of living, he had to move back in with his parents and depend on their meagre pensioner income, “with little hope of finding work” in his field.

Out of a job for nearly a year now and with no unemployment insurance, this 29-year-old Lisbon native believes “this is just the beginning of a long period of poverty, a terrible crisis that I’m not responsible for, caused by the usual powerful men.”

Marina Oliveira, a 26-year-old psychologist who has been unemployed for the past 13 months, told IPS that when a crisis hits — no matter where in the world — “poverty only comes calling at the doors of the most vulnerable.”

She survives thanks to her parents, who are helping her “until I can leave the country to follow my dreams, which sadly have become impossible in my country, where poverty is only going to get worse, as new measures are imposed to pay the troika back,” Oliveira said.

The troika granted the Portuguese government a total of 110 billion dollars to service the national debt, meet administration costs and, above all and despite great criticism, provide capital for its distressed banks.

Oliveira highlighted that other countries have also suffered “these crises imposed by the promoters of the consumerist dream, who never get stuck with the bill.”

“The most outrageous example of this is the United States, where some of the leading people responsible for the 2008 crisis, which later spread across the world, were invited by (President Barack) Obama to serve as advisers and consultants for his administration,” he said.

In “Portugal we have to live under the rules dictated by this enormously powerful troika, making us bow to a global financial system that is unscrupulous and completely heartless and that forces us to surrender our country to that pack of vultures that are the large banks.”

The latest statistics available indicate that in 2011 Portugal had a gross domestic product (GDP) of 214 billion dollars and its national purchasing power stood at 77.4 percent of the average purchasing power for the EU.

Preliminary data for 2012 reveal a drop of 2.9 percentage points in Portugal’s GDP, confirming the downward trend observed since the start of the crisis. From 2009 to the end of 2013 it will have dropped by a total of 7.4 percent, according to projections released by the Bank of Portugal on Jan. 15.

For the victims of the crisis, the last straw came on Jan. 10 with the IMF’s new recommendations.

In a document addressed to the Portuguese government, the IMF called for greater austerity, which is certain to affect an already besieged middle class that in 18 months lost almost 25 percent of its purchasing power.

The IMF recommends a new package of measures, with additional cuts in pensions and wages, in particular in sectors such as education, health and law enforcement.

In his Jan. 22 opinion column, featured in the Público de Lisboa newspaper, analyst José Vítor Malheiros noted that this policy of drastic cuts is applied “only to social areas, never affecting the benefits of the (wealthiest) one percent”, and it is aimed at “pleasing creditors and perpetuating Portugal’s dependence on the financial system”.

Among the many waiting in line at a Lisbon Employment Centre, a man in his forties told IPS that he comes to the centre every day in the hope of finding “any job they can offer me, because I have a 12-year-old daughter and we’re both going hungry.”

He agreed to talk to IPS but asked to remain anonymous “because I’d like to speak frankly and, if I give you my name, they’ll never give me a job.”

He also refused to give his profession or trade, merely noting, “I was foolish enough to think that a university degree would guarantee a decent future. But here I am, willing to take any job.”

“Portugal has been gripped by fear, a fear that’s spreading thanks to outrageous policies. And those who are lucky to still have a job are bending over backwards to please their bosses, afraid they’ll be fired and will have to join the ranks of the new poor.”