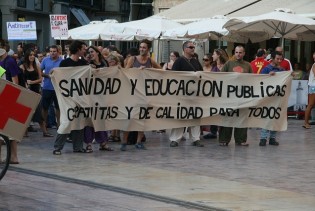 By Marianela Jarroud
More than 400 social organisations from Europe and Latin America and the Caribbean will gather on Jan. 25-27 at a Summit of the Peoples called as an alternative to the bi-regional meeting of heads of state and government to be held at the same time in the Chilean capital.

By Julio Godoy
The austerity programmes being rolled out in virtually every member state of the European Union (EU) - particularly in Greece, Portugal, Spain and Italy - have failed to reach their stated objective of consolidating public finances in order to solve sovereign debt crises.

By Apostolis Fotiadis
Like a person on life support whose vital functions are failing, the Greek economy is slowly but surely shutting down as radiation from the so-called ‘austerity plan’ erodes public institutions.
ADVERTISEMENT ADVERTISEMENT