In this column, Roberto Savio, founder and president emeritus of the Inter Press Service (IPS) news agency and publisher of Other News, argues that European leaders’ recent decision to allocate 60 billion dollars to banks, but only six billion dollars to fight youth unemployment, paints a clear picture of the region’s priorities: financial institutions above the well-being of the people. 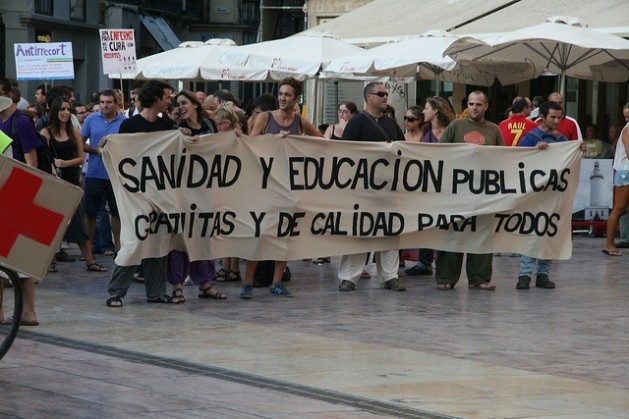 ROME, Jul 8 2013 (IPS) - At the last summit of European heads of state held in Brussels at the end of June, the main theme was youth unemployment, which has now reached 23 percent of European youth (although it stands at 41 percent in Spain).

Last year, the International Labour Organisation issued a dramatic report on Global Employment Trends for Youth 2012 in which it spoke of a “lost generation”.

According to projections, the generation currently seeking to enter the market place will retire with a pension of just 480 euros – if it actually succeeds in entering the market – because of temporary jobs without social contributions.

All the efforts to create a European banking system under a central regulator are now on hold until the German elections in September. As a member of the German delegation at the June summit is reported to have said: ”We know well what we are supposed to do, to calm financial markets. But we are not elected by financial markets, we are elected by German citizens.” (IHT, Jun. 28, 2013).

And of course, no effort has been made to explain to Germany’s citizens why it is in their interest to show economic solidarity with the most fragile countries of Europe. Democracy, as it is understood today, is based on leaders who follow popular feelings, not on leaders who feel it their duty to push their electors towards a world of vision and challenges.

The summit was also obliged to accept the blackmail of British Prime Minister David Cameron: either you maintain the subsidies that then Prime Minister Margaret Thatcher obtained in 1973, when you insisted that we join Europe (which makes Britain a net recipient of European money), or we will block the European budget.

This is because the anti-Europe electorate in Britain is growing and Cameron could not afford to appear weak. But Cameron was one of the strongest proponents of the subsidy for the banks, and no wonder: the financial system now accounts for 10 percent of Britain’s gross domestic product (GDP).

It is a very curious situation, in which Europe has not only spent several hundred billion dollars on its banks, it has even invited the International Monetary Fund (whose controlling member is the U.S.) to join the European institutions and manage the European crisis.

And, in an unprecedented sign of independence from the U.S., Europe has rejected American calls for reducing austerity and starting policies of growth as Washington and Tokyo have been doing, so far with proven success.

Nevertheless, what is common to the three most powerful players in the West (U.S., Europe and Japan) has been their inability – and unwillingness – to place banks under control and react to their string of crimes.

Central bankers from the entire world join in the Bank for International Settlements (BIS) based in Basel. Now its Basel Committee on Banking Supervision has come up with a proposal that would tighten the relationship between the capital of the banks and the volume of financial operations they can afford. The proposal establishes that banks must maintain high-quality capital, like stock or retained earnings, equal to seven percent of their loans and assets, and that the biggest banks may be required to hold more than nine percent.

This is not exactly a revolutionary proposal, and has been criticised as insufficient by many analysts and regulators. This is confirmed by the fact that the U.S. Federal Reserve estimates that between 90 and 95 percent of banks with assets of less than 10 billion dollars already respect such parameters. Well, even this bland proposal has been received with a howl of protest from many banks, claiming that they would have great difficulty in raising capital.

Under the old capitalist economy, no enterprise would run without capital adequate to its need. Today we have a new branch of the economy, which wants to play without capital, and expects the state to bail it out if anything goes wrong. So, let us just look briefly at how many times things went wrong without anybody ever going to jail:

On Apr. 28, 2002, the U.S. Securities and Exchange Commission (SEC), won a lawsuit ordering 10 banks to pay 1.4 billion dollars in compensation and fines because of fraudulent activities. One year later, the SEC discovered that 13 out of 15 financial institutions randomly investigated were guilty of fraud. In 2010, Goldman Sachs agreed to a fine of 550 million dollars to avoid a trial for fraud.

In July last year, the U.S. Senate presented a 335-page report on the British bank HSBC. Over the years it helped drug dealers and criminals recycle illicit money. The fine was 1.9 billion dollars.

In February this year, Barclays Bank announced that it had set aside 1.165 billion euros to face fines for “illicit transactions”.

And in March this year, Citigroup accepted a fine of 730 million dollars for “selling investments based on junk to unsuspecting clients”.

We all know that the crisis in which we find ourselves (which, for the optimists, will end in 2020 and for the pessimists in 2025) originated in the U.S., caused by the 10 largest banks’ decision to sell derivatives based on junk and certified by the Standard & Poor’s and Moody’s rating agencies. U.S. taxpayers “donated” 750,000 million dollars to the banks, while the British did the same for HSBC, Royal Bank of Scotland, Barclays Bank and Northern Rock.

While this financial disaster was happening, the ‘Big Five’ (Goldman Sachs, Merrill Lynch, Morgan Stanley, Lehman Brothers and Bearn Sterns) paid their executives three billion dollars between 2003 and 2007, And, in 2008, they received 20 billion dollars in bonuses while their banks were losing 42 billion dollars.

Meanwhile, back at the summit table, the priority for survival is to allocate taxpayers’ money to banks, even if all talk is about youth unemployment.