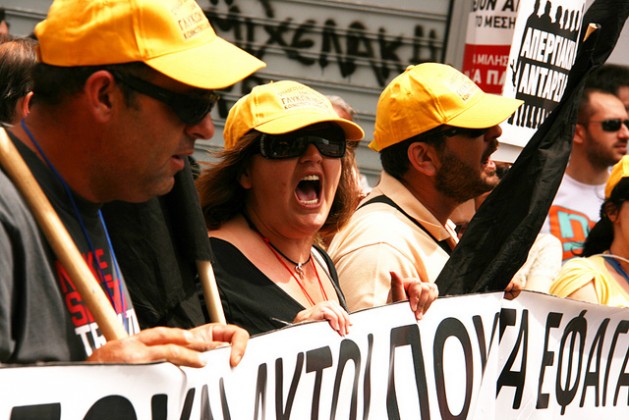 Thousands have protested against the austerity measures imposed on Greece by its creditors. Credit: George Laoutaris/CC-BY-ND-2.0

ATHENS, Nov 9 2012 (IPS) - Ignoring the thousands of protestors gathered outside the Greek parliament on Wednesday, the government voted in public spending cuts amounting to 17 billion dollars in an economy already on its knees from a lacerated budget.

The government was promised 40 billion dollars of bailout money in exchange for the implementation of this fresh bout of austerity.

But the country’s creditors – the European Central Bank (ECB), the European Commission (EC) and the International Monetary Fund (IMF), known as the Troika – have fallen out over crucial disagreements about the terms of the financial “rescue” operation, resulting in a stalemate that has brought Greece to the knife’s edge.

It is obvious that a write-down of Greece’s 200-billion-euro debt, now owned by the European public sector, is sorely needed in order for Greece to avoid disorderly default.

In fact, a day before the election in the United States, even incumbent President Barack Obama threw his weight behind calls for a write-down.

But the EC and ECB are reluctant to accept losses, which the IMF has deemed “necessary”.

The handling of Greek debt has been a point of contention between the IMF management and European interests in and outside the Fund since Greece first asked its international creditors to rescue it from default back in May 2010.

Unable to survive its debt obligations, Greece entered into a 110-billion-euro loan deal with its eurozone partners and the IMF, conditional on the implementation of severe austerity measures.

The programme failed and the economy has all but imploded.

Peter Chowla, head of the London-based Bretton Woods Project, a non-governmental organisation that monitors IMF and World Bank activity, told IPS that it was obvious to most observers very soon after the program began that a second bailout agreement would soon follow.

He added “Even during 2010, many internal IMF reports warned that the Greek programme would not work out. Those were systematically ignored by the Fund’s leadership in order to present homogeneity of the Troika in negotiations with Greece.”

Meanwhile the main line inside the Fund gradually shifted away from European interests and closer to the positions of developing countries like India, Brazil and Russia, all of whom expressed doubts about the efficacy of the Greek plan.

Finally a compromise was struck between the IMF and the European financial institutions about the writing down of Greek debt to a level that might allow the programme to continue.

“In the spring of 2011, amid disagreements about the sustainability of Greek debt, the IMF warned, for the first time, of not offering any more money unless a debt restructure took place. European interests, inside and outside the Fund, finally had to accept this, but tried to limit their losses as much as possible,” Chowla explained.

In October 2011, the Troika offered a second 130-billion-euro bailout loan that not only demanded another austerity package, but also forced private creditors holding Greek government bonds to sign a deal accepting a 53.5 percent face value loss.

Soon after, it became clear that the second programme was wreaking havoc on a crumbling economy and would not put Greek public finances back in order.

And meanwhile, relations within the Troika kept deteriorating.

A confirmation of the depth of the fracture inside the Fund emerged this past July, when Peter Doyle, after two decades of service within the Research and Development branch of the Fund, resigned.

In his brief letter he criticised the IMF’s role in the Troika, blaming ‘European bias’ for constraining the Fund from exercising an impartial role.

Doyle charged that the IMF had compromised its independence, citing “suppression” of information that had been identified well in advance as a reason for the failure of the institution’s surveillance mechanism, which should have properly examined the impacts of the austerity plan.

Austerity shock therapy, according to Doyle, has caused the economy to disintegrate faster than expected and has brought “the second global reserve currency to the brink”.

Further evidence of the Fund’s responsibility in what is now a full-blown Greek crisis surfaced during the launch of the IMF’s autumn 2012 World Economic Outlook in Tokyo, where the IMF’s chief economist, Olivier Blanchard, acknowledged that the Fund’s surveillance models, used to dictate the terms of bailouts, were flawed.

Panagiotis Roumeliotis, Greece’s one-time representative to the IMF, confirmed to IPS that Doyle’s criticism is serious and valid.

He also provoked a high-profile investigation about the handling of the crisis by stating in an interview with the New York Times this August that the bailout plan was “condemned” from the start.

Domenico Lombardi, Italy’s former representative on the IMF’s executive board, says the impasse within the Troika is now reaching a total deadlock.

This August, the Fund refused to provide money to pay off a 3.2- billion-euro Greek bond held by the ECB, Lombardi told IPS. This was made up by an emergency bond sale by the Greek state.

A 5.5-billion-euro bond due to expire on Nov. 16 should be covered by anticipated bailout loans, but the IMF seems unwilling to participate in financing that either.

“Basically the IMF is not going to contribute in any meaningful way till the debt restructuring issue is agreed, formally or informally, explicitly or implicitly,” Lombardi told IPS.

He added that the entire joint programme would have to be restructured if the IMF pulled out at this late stage.

Given that the Greek economy will face an emergency liquidity problem next week, it hastily organised a short-term bond sale Friday to close the gap.

This debt is owned by the ECB, which has thus far refused to write down the debt or lower interest rates.

The situation has now become very dangerous, according to Lombardi.

The creditors may be able to buy some time “by lowering the interest rate on bailout money they have loaned to Greece,” he said.

But the most pressing issue is that none of the leading players seems to have any idea what is to be done in the long term.