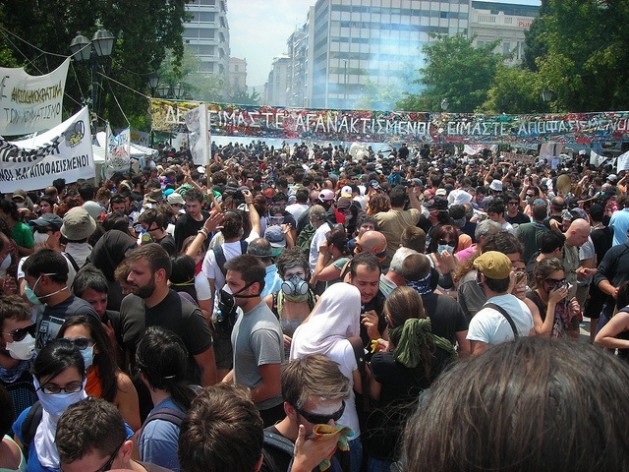 ATHENS, Oct 10 2012 (IPS) - Like a person on life support whose vital functions are failing, the Greek economy is slowly but surely shutting down as radiation from the so-called ‘austerity plan’ erodes public institutions.

When German Chancellor Angela Merkel arrived here on Tuesday morning for an economic assessment of the debt-ravaged country, she did not see the things that, for thousands, have become commonplace: cancer patients dying outside clinics, unable to access the treatment they need, or kindergartens turning students away due to overcapacity.

Meanwhile, international financial institutions continue to drag their feet on how best to solve the debt crisis and revive the country’s banking system.

Greek Prime Minister Antonis Samara publicly stated last week that Greece will be “unable to go on without further international financial aid after November”, referring to the long-awaited 31.5-billion-euro bailout. This amount is only the latest tranche of a 110-billion-euro loan that the eurozone and the IMF earmarked for Greece back in May 2010, conditional on the implementation of austerity measures.

Disbursement of this loan has been momentarily stalled due to a stalemate between the IMF and its European counterparts (the European Commission and the European Central Bank) over whether Greece will be able to meet its debt obligations in the near future.

Sources close to the government told IPS that the IMF is even considering opting out of the Troika, the body that has been responsible for negotiating and implementing a severe austerity plan for more than two years.

Over the next few days, Merkel, a staunch supporter of the massive public spending cuts required by the austerity package, will push the Greek government to reduce public spending by a further 13 billion dollars.

Giannis Tsounis, secretary general of the federation of municipalities (POE-OTA), an umbrella for all the major municipal unions in Greece, told IPS that the municipal administration is on the verge of collapse.

“Before the crisis the state dedicated 169 million euros to municipalities. Now that number has reduced to 95 million and will eventually reach 72 million.

“Next year they will enlarge our portfolio by adding 113 responsibilities (to our mandate), which we will be expected to carry out after a 60 percent reduction in resources,” according to Tsounis.

“There are 65,000 municipal workers in Greece and 10,000 will (retire) in the next few months,” Tsounis added. “According to austerity plans they won’t be replaced.

“In order to unburden the central administration of responsibilities, the Minister of Interior gets rid of the problem by pushing various functions of the government onto the municipal level.

“Some municipalities are already using money allocated for other purposes to pay wages while many workers remain unpaid for months,” said Tsounis.

“We cannot keep functioning like this, where there is no money left even to maintain public swimming pools, or pay kindergarten teachers their wages.”

A more silent, but equally dangerous breakdown is looming over the health sector, according to Giorgos Vixas, a cardiologist running a makeshift yet highly efficient clinic in Elliniko in South Athens.

Some weeks ago, during a radio debate with Vixas, the Greek minister of health was forced to admit that the public health system is unable to provide medical assistance to an uninsured person.

Most workers lose their insurance barely a year after they are laid off. Self-employed people lose the possibility of medical care the minute they fail to renew their insurance.

According to the labour inspectorate one in every three workers is uninsured. Roughly 57.2 percent of uninsured labourers are Greek and 42.8 percent are migrant workers.

Vixas believes the government has made a “huge mistake” by cutting state budgets and restricting access to public healthcare during a time of crisis.

“Many people with serious conditions are left without medicine, diagnostic examinations, or surgery. People do not take their drugs for months because they can’t afford them. Three cancer patients that came here, to this very clinic, died because they had no access to chemotherapy.”

“A woman who had miscarried came here, with the foetus still inside her. She needed an emergency operation but no public clinic would accept her. We managed to send her to a private clinic that offered her a free abortion,” he added.

“In other cases various doctors continue to treat excluded patients in public hospitals despite a term in the austerity memorandum that states that when a doctor offers services informally, he or she must cover the expense themselves,” Vixas said.

He also predicted that the health sector budget would be choked by “another 1.5 billion euros, bringing total cuts to five billion euros since the austerity package was first implemented.”

Antonis Liakopoulos, deputy president of the Association of Attika Police Officers, told IPS that even public safety is at risk due to financial constraints.

Policemen have taken a six percent wage reduction, before taxes. Often, those who work the night shifts are not paid at all, and none receives wages for anything more than 48 hours of work despite working much longer hours.

“More than 35 percent of police officers have a second job. Plenty of our colleagues are forced to shoulder the expense of adding petrol, or changing tires. Many police vehicles are immobilised” due to inadequate repairs, he added.

“A reduction in the quality of safety services might open the door to corruption within the police structure, though the risk of this is low at the moment,” said Liakopoulos.

Stavros Lygeros, a popular economic and political commentator and author of the best-selling analysis on the Greek crisis, ‘From Cleptocracy to Bankruptcy’, told IPS austerity policies are fast destroying the capacities of the Greek state.

“We are observing a rapid deterioration of governability. The preconditions for (total) collapse, characterised by defunct state institutions, are approaching fast.”

It is of ultimate importance that European partners understand where the austerity package is leading Greek society, Lygeros warned.

What Greece is experiencing is not what the IMF calls “economic therapy”, but rather a slow death, he said.

“No country can do what the Troika is asking for. No society can accept a devaluation of such proportions,” Lygeros concluded.