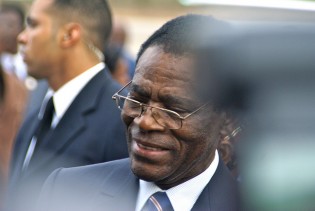 By Mario Queiroz
Evidently, oil talked louder. By unanimous resolution, the Community of Portuguese Language Countries (CPLP) admitted Equatorial Guinea as a full member, in spite of the CPLP’s ban on dictatorial regimes and the death penalty.

By Mario Queiroz
“Who do I call if I want to call Europe?” This famous question attributed to former U.S. secretary of state Henry Kissinger has an obvious answer today: Angela Merkel, the conservative German chancellor.

By Mario Queiroz
The anniversary of the peaceful Carnation Revolution that overthrew Portugal’s 1926-1974 dictatorship has gone from being a popular celebration to a day of mass protests against the draconian austerity policies of the government of Prime Minister Pedro Passos Coelho.

By Mario Queiroz
The huge impact of the economic crisis on male employment in Portugal has led to a sharp increase in the proportion of women who have become the main breadwinners in their families. But that has not translated into progress towards equality.

By Mario Queiroz
Thousands of people marched through the streets of cities across Portugal "against exploitation and impoverishment" caused by the government's austerity cuts, in a protest organised by the General Confederation of Portuguese Workers (CGTP), the country's largest trade union.

By Mario Queiroz
The writer has just confirmed he had recorded the interview and taken notes of the conference, but he incurred in a regrettable error confusing António Soares (Toni Tcheca) with Emílio Krafft Kosta. This is of course completely unprofessional, and we have erased both versions of the story, in Spanish and English. Please accept our sincere apologies.

By Mario Queiroz
A promising alternative in Portugal’s profoundly depressed domestic market are incentives for traditional exports which, due to their high quality or uniqueness, do not face fierce foreign competition. “Flor de sal”, the country’s premium hand-harvested sea salt, is one of these products.

By Mario Queiroz
Portugal was traditionally one of the European countries with the lowest levels of drug use, until the 1980s and 1990s, when problematic drug abuse, especially of heroin, became a major problem.

By Mario Queiroz
Portugal’s anti-drug policies have been gaining international visibility since this country began to publish the results of its 2001 decision to eliminate all criminal penalties for personal possession of drugs.

By Mario Queiroz
For the first time in 38 years, the former soldiers and officers who opened the doors to democracy in Portugal did not take part in the official celebration of the Carnation Revolution, which toppled Europe’s longest dictatorship in 1974.

Winter of Crisis Killing the Elderly in Portugal

By Mario Queiroz
This winter the mortality rate in Portugal has grown alarmingly, to a level far higher than the seasonal averages of previous years. And the brunt of the death toll is being borne by low-income elderly people.

By Mario Queiroz
The flood of economic woes devastating Greece and Portugal are evidence that the German prescription imposed by a troika of multilateral creditors is not working, and that both countries are heading into a blind alley, says economics professor Mario Olivares.

By Mario Queiroz
The underground economy in Portugal is booming thanks to the steep increases in taxation and prices demanded by a "troika" of international creditors to address the country's economic crisis.

By Mario Queiroz
The death of the president of Guinea-Bissau, Malam Bacai Sanhá, could usher in a replay of the military uprisings that have set an unmistakable seal of instability on the political life of this small West African country.
Next Page »
ADVERTISEMENT ADVERTISEMENT