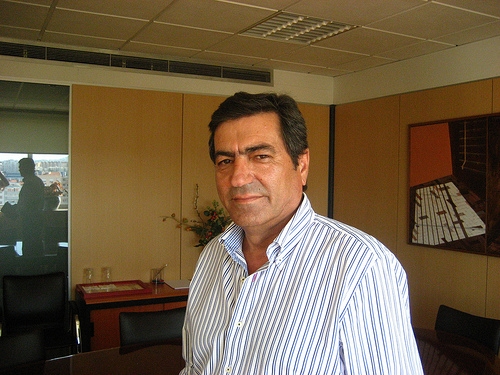 The success achieved is not solely due to the decriminalisation of drug consumption, says Goulão. Credit: Mario Queiroz/IPS

LISBON, Jul 31 2012 (IPS) - Portugal’s anti-drug policies have been gaining international visibility since this country began to publish the results of its 2001 decision to eliminate all criminal penalties for personal possession of drugs.

Portugal’s drug decriminalisation policy is cited as an example by experts and personalities around the world who have joined a global campaign against the United Nations prohibition-oriented anti-drug approach.

Decriminalisation of drug consumption, still opposed by political sectors like the right, was made possible by “favourable public opinion…it arose from society,” where virtually every family had a member or friend with a drug abuse problem, Goulão told IPS in an interview in his office.

A: Yes. But it is no longer criminally punishable: people are not prosecuted in court for it, and it doesn’t go on their police record. And they are no longer sent to prison, but are fined in administrative tribunals that we call ‘committees to dissuade drug addiction’, which have the authority to levy fines and have the particularity of analysing cases of drug users from a health perspective.

Q: Is Portugal’s legislation in line with international agreements on drugs?

A: When we conceived of the decriminalisation, the framework that the government put in place was determined by the U.N. conventions. Decriminalisation keeps penalties in the administrative sphere, which is in line with the requirements of the conventions.

Q: The success of this policy is increasingly cited in the rest of the world. When did that start to happen?

A: There was a great deal of curiosity at the start. Afterwards, since there were no results to show yet, interest waned. Only since 2009, when an international report was published, did interest begin to expand greatly again, and this has translated into frequent visits by politicians, doctors, experts and journalists from around the world.

But the success is not solely due to the decriminalisation. It is the result of a set of policies that target reduction of both supply and demand, including measures of prevention, treatment, harm reduction and social reinsertion.

Q: What were the origins of this process?

A: Before the 1974 democratising revolution, we had practically no drug problem. We were a society completely isolated by the dictatorship (1926-1974) from everything that was happening in the world. Young people couldn’t leave the country, except when they were sent to the colonial war in Africa (1961-1974), and at the same time we were not a very attractive destination for young people from other countries.

While other societies gradually learned how to live with drugs, we didn’t have that opportunity.

Suddenly, everything changed with the revolution. On one hand, thousands of soldiers and colonists came back from Africa, many of whom already had a drug habit, and they brought tons of substances to Portugal.

On the other hand, drug consumption was associated with the idea of freedom, and there was frenzied, widespread experimentation. They didn’t bring these products back with them to sell, but to share with their friends. However, criminal organisations swiftly appeared to exploit the new market.

We didn’t understand the difference between soft drugs and heroin, for example. The first campaigns in the 1970s were atrocious, with messages like “drugs, madness, death.”

Everything became more complicated with the appearance of HIV/AIDS in the following decade, which made drug consumption the most pressing problem in Portugal, with one or more generations completely devastated by addiction and by diseases transmitted by syringe, high levels of drug-related crime, and huge public visibility of the problem.

Q: At the start, the response by the state was basically a law enforcement approach.

A: Because it became a crime-related issue. The first response, the establishment of centres for studying the problem and treating addicts, did not emerge in the area of public health, but in the sphere of the Justice Ministry.

In this context, the first private-sector responses emerged, some of which were extremely profitable, with people getting rich on the back of this phenomenon. And drug consumers became victims, first exploited by traffickers and dealers, and later by the treatment centres.

Q: When did the change begin?

A: The Health Ministry’s first rehabilitation centres were set up in 1986 and 1987, and after that, a national network of treatment centres was set up to respond to the problem.

In 1997, I became the national director of the network of treatment centres. The next year, a commission of 10 experts and I produced a report that indicated directions in which to move with respect to policies of prevention, treatment, harm reduction and social reinsertion. One of our premises is that drug abusers are ill, not criminals, and that they need help.

So we proposed the decriminalisation of consumption, a reform that was debated in parliament in 2000, when the left-wing majority approved it despite opposition from the right. It was signed into law in 2001.

Treating drug users as people who are sick, rather than as criminals, resonated with Portuguese society, because the phenomenon cut across all sectors: it was almost impossible to find a family that didn’t have a problem with a son or daughter, nephew or niece, or cousin, and the families knew they weren’t criminals, but people who needed support.

That social sentiment in favour of decriminalisation was something that arose from society.

Q: What are the most significant achievements?

A: The most disorganised groups of users are gradually starting to approach the treatment centres. People used to be afraid to contact them, for fear of being reported to the police. But today they come spontaneously, and they don’t have any problem identifying themselves.

The use of almost all illegal substances has been reduced among the youngest segments of the population. There has been a drastic fall in intravenous drug use, and in consequence, in the spread of AIDS. And drug-related crime has also gone down.

Q: The economic crisis, rise in unemployment and lack of a future for the young: are these a cause for concern about a new rise in drug addiction?

A: Some alarm signals have appeared, with the crisis. People consuming out of desperation is a problem that has reappeared – that is, people who aren’t seeking pleasure, but relief from their troubles, through drugs and alcohol.

Many of our old patients who had managed to return to normal life and find jobs, for example, are among the most vulnerable.

As unemployment climbs, they are the first people who are discarded, and when that happens, they see the world that they were building collapse like a house of cards. Relapse frequently occurs in these cases.

*This story is the first of a two-part series on the Portuguese model of decriminalisation of drugs.