LISBON, Feb 19 2013 (IPS) - Thousands of people marched through the streets of cities across Portugal “against exploitation and impoverishment” caused by the government’s austerity cuts, in a protest organised by the General Confederation of Portuguese Workers (CGTP), the country’s largest trade union. 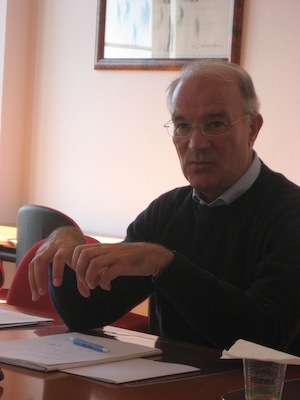 Arménio Carlos: “Hunger is back in Portugal”. Credit: Mario Quiroz/IPS

“The European Union should not be an accomplice to neoliberal economic policies that treat people as objects and attack basic social benefits, to the point of negating the United Nations Universal Declaration of Human Rights,” CGTP Secretary-General Arménio Carlos told IPS, while finalising details for the Jornada Nacional de Acçao e Luta (National Day of Action and Struggle) held Saturday.

The CGTP announced on Friday Feb. 15 that it would present a complaint against the Portuguese state before the International Labour Organisations (ILO) for violation of several conventions for the protection of collective bargaining and freedom of association.

Q: Are we seeing a substantive change in the system that used to guarantee what is known as “Social Europe”?

A: What is being called into question is a set of assumptions and principles upholding decent work, as defined by the ILO. One cannot play with people’s lives; they are not “guinea pigs” for neoliberal laboratories to test how far one can go, whether in Portugal, Greece, Spain or Ireland.

Our countries were viewed as of lesser importance, because of their economic and financial problems, but now it is becoming evident that the problems do not only apply to Portuguese, Greek or Irish people. They also affect Germany, the “engine” of Europe, which has entered a phase of economic stagnation. This ought to give those responsible for the EU pause for reflection.

Q: How will Portugal be able to pay its debt of 78 billion euros (equivalent to 110 billion dollars) owed to the EU-International Monetary Fund (IMF)-European Central Bank (ECB) troika?

A: Unless the loan is renegotiated, Portugal will not be able to pay and will become a financial colony.

Renegotiation does not mean evading repayment, it means negotiating suitable conditions in order to do so. But the lenders themselves are hampering the development of economic policies to allow repayment of the debt.

For example, the ECB is helping the financial sector by lending money at 0.7 percent interest and, in turn, banks are making credit available at eight percent to the state and to companies. This means the ECB is presently fomenting financial speculation.

Unemployment is still growing in Portugal and we have almost one million people without work, equivalent to a record figure of 16.9 percent, the third highest jobless rate in the EU, after Greece and Spain. The economic recession is going to continue this year. Tens of thousands of companies are going to close down or go bankrupt.

Q: Does this disheartening future mean that poverty will also increase?

A: Poverty and social exclusion are becoming generalised throughout Portugal, and we are also seeing the return of hunger in this country.

Thousands of children are hungry, and naturally that also means that their parents have also been hungry for some time, due to the neoliberal policy that is bleeding Portuguese people dry.

In addition to the widespread suffering it has caused, the country’s future is being called into question. It is a policy that does not solve problems, but exacerbates them.

Q: The two general strikes and various protest demonstrations in 2012 achieved enormous turnouts. Is that because the demands of the CGTP now go far beyond strictly trade union matters?

A: Reduction of purchasing power is affecting millions of people, and it can be seen at two levels.

Second, the general state budget for 2013 will impose further income reductions through taxes, which will cause a fall of between six and seven percent in family incomes, so that one can only conclude that the purchasing power of workers will continue in free fall.

Meanwhile, enormous tax benefits are being granted to large economic and financial corporations, without any real effort to combat fraud and tax evasion. It is interesting to know, too, that these crimes cost about 25 percent of GDP.

That is where the problem should begin to be attacked, but it does not happen, because those economic and financial powers are practically untouchable.

The two general strikes and the big demonstrations in 2012, as well as Saturday’s protest, represent a snowballing movement, an unprecedented moment in which the vast majority of Portuguese people can express their discontent and indignation and demand an end to the policies imposed by the troika.

Q: What about labour rights?

A: The balance of labour laws between workers and employers has been further tipped in favour of the bosses, for instance, by reduction in overtime pay, easier dismissal, lower compensation payments and erosion of social protection, as well as an unprecedented attack on collective bargaining.

We are seeing deregulation of labour laws in favour of employers.

At present, miserable levels of compensation are being debated, that would put a Portuguese worker at the level of only 12 percent of an Irish or German worker and between 25 and 30 percent compared to a Spaniard. In addition to the recessionary spiral, in Portugal we have a declining spiral of civilisation.

A: For a government with a neoliberal viewpoint, there is no limit. They do not see people, they only see numbers and goals. At the end of the day, it is a settling of scores with the April Revolution (or Carnation Revolution, when army captains democratised Portugal in 1974), which brought in a collection of rights that gave value to work and dignity to people.

The government (of Prime Minister Pedro Passos Coelho) remains stone-hearted in the presence of parents who have lost their jobs, children who are denied their right to work, parents whose social protections are withdrawn, children who are forced to emigrate, and elderly people who cannot afford to buy the medicines they need to survive.

Q: What does the CGTP propose?

A: We think that it is not enough to talk about growth. Growth is only possible with investments, more production, better income distribution and higher spending power. To us, these components are essential to solve the fundamental problem.