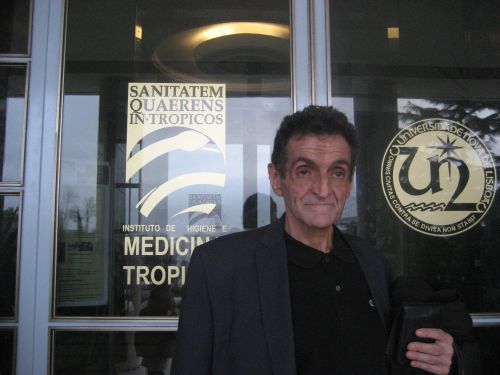 Luis Mendão, president of the Portuguese Group of Activists for Treatment for HIV/AIDS. Credit: Mario Queiroz/IPS

LISBON, Mar 28 2013 (IPS) - In 1996, Luís Mendão was shocked to learn that he had contracted HIV/AIDS, and that the infection was advanced because of the late diagnosis. Racing against time, he began to put his affairs in order and to get ready to face his death.

However, after a year of treatment, he felt better and realised that his life was not about to end tomorrow. “I am still alive, but the cost would have been much less if I had known earlier,” he said in an interview with IPS at the Second Conference on HIV Infection in Hard to Reach Groups, held Monday and Tuesday Mar. 25-26 in Lisbon.

This is what makes him want to address the situation of undocumented immigrants, who because of red tape are prevented from having health tests and receiving treatment for illnesses like HIV/AIDS.

Today Mendão is the most visible face of the fight against HIV/AIDS in Portugal.

But the activist, who has a degree in biochemistry, “is not only seen as a reference point in Portugal, but is also the most dynamic activist in Europe and one of the most important internationally,” the co-chair of the EU HIV/AIDS Civil Society Forum, Anna Zakowicz, told IPS.

Mendão is head of the Pedro Santos Portuguese Group of Activists for HIV/AIDS Treatment (GAT), founded in 2001 to foment cooperation between people from different communities and organisations who are affected by the illness. He is also vice president of the European AIDS Treatment Group (EATG).

Q: You have often been cited as an example, not only in your own country but also abroad, of someone who did not hesitate to come out of the closet when being HIV-positive was still taboo. What can you tell us about this?

A: In September 1996, after a very difficult year in which I had little money and no work, my health suddenly collapsed. I was hospitalised for a week for tests. On the seventh day, the duty doctor told me the situation was very serious, my lungs were affected, my immune system was compromised and I had a complex and highly resistant anaemia.

It was AIDS, everything started to make sense – the overwhelming fatigue, the lung problem, my eyes, the virus infections, my loss of several kilos in weight.

For 10 years I had been doing the rounds of the health services being treated for molluscum virus skin infections (water warts), Herpes zoster (shingles), candidiasis (a yeast infection), and unexplained fatigue. Not once did anyone suggest an HIV test. I am still alive, but the cost would have been much less if I had known earlier on what I had. Take my advice: it is best to know.

Q: And that is when your battle for health began, and also for the law to guarantee access to treatment for all. Now, people who do not have health system user cards, like undocumented migrants, are being excluded. How can the state behave in this illegal way?

A: The 2001 law, which was regarded as a major humanitarian advance, establishes that anyone living in Portugal, even undocumented persons, have a right to use the National Health Service (SNS).

The law has not changed, but a stratagem is being used. Illegal immigrants are not denied an SNS card, but they are given an unnumbered card, which is rejected by the computer system, so that they cannot access health care treatment such as anti-AIDS therapy.

Q: The conference in Lisbon is aimed particularly at “men who have sex with men and sex workers.” Why is this?

A: In Portugal, a high proportion of men who have sex with men do so in secret and live in the closet. It is a situation that does not appear in medical records, because it is something they do not wish to talk about. As for sex workers, a large number of them are undocumented immigrants, which means they have no access to the SNS.

These two groups are considered by the Joint United Nations Programme on HIV/AIDS (UNAIDS) as fundamental in questions related to the virus, but there was very little information about the prevalence of infection and their problems need to be addressed, especially when it comes to the additional problems of immigrant rights.

The most vulnerable group is sex workers who are undocumented immigrants.

We are talking about people who, since they have no numbered health service cards, have to pay for tests and doctors’ visits, which in this poor and marginalised population effectively prevents detection, treatment and prevention of the illness.

Q: Is the economic and financial crisis bringing back street prostitution?

A: It has. Given the need to survive, the crisis has drawn some people in a difficult economic situation into the sex trade, despite the risk of HIV/AIDS. Many women have begun to work as prostitutes in the last two years, and others who had left this life have returned to it.

Ninety percent of sex workers are women, and the prevalence of HIV/AIDS infection is uneven, as street prostitutes are much more vulnerable to contracting and transmitting the virus than women who work in apartments.

Q: No doubt support for combating the epidemic has also been affected by the crisis.

A: There is a very serious problem with access to medication. At the moment the situation is just about covered, but it may spiral out of control at any time.

What we have found in our area, where the (antiretroviral) drugs are extremely expensive, is that new cases, especially among immigrants or Portuguese nationals who have returned to the country after living in Africa for many years, are rejected by many hospitals.

Then, for the last two years there has been no funding to support urgent new projects. For instance, state support for GAT has fallen from 70 percent to 30 percent of its total budget.

This is appalling, especially for Portugal, the country with the worst conditions in Western Europe for the four groups hit hardest by HIV/AIDS: homosexuals, sex workers, drug users and sub-Saharan immigrants.