LISBON, Mar 1 2013 (IPS) - Indignation in Portugal over rampant joblessness and cuts in wages, pensions and unemployment benefits, together with a growing tax burden, has given rise to innovative forms of protest capable of drawing large crowds.

The common denominator is non-violence. A mixture of ingenuity, humour and nostalgia for the good old days is the recipe that wide sectors of society are following to express their outrage in the face of the social and economic debacle.
In the conservative government’s year and a half in office, the unemployment rate has climbed from 11 to 16.9 percent, while GDP fell by 3.2 percent in 2012 and one-quarter of the population of 10.6 million are facing poverty and social exclusion.

Painting murals, which was popular three decades ago, is making a comeback. 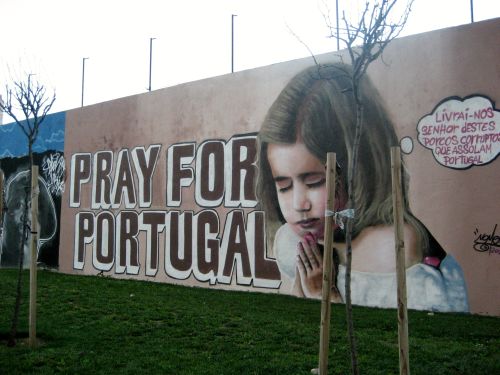 Hundreds of young people are using paint and the walls of urban buildings across the country as a form of protest against the neoliberal free market policies of the government of Prime Minister Pedro Passos Coelho. Democracy does not just mean voting every four years, they argue.

One example is Marquês da Fronteira Avenue, one of Lisbon’s main arteries, where dozens of people responded to a call by the Associação de Combate à Precariedade (Association to Combat Job Insecurity) and Precários Inflexíveis (Inflexible Precarious Workers), gathering on Sunday Feb. 24 to paint huge murals about the crisis, in an atmosphere of festive solidarity.

On the murals, the two groups are also calling for people to come out for a demonstration on Saturday Mar. 2, without the involvement of political parties or trade unions.

Another novel form of protest arose in the public galleries of parliament on Feb. 15, when a group of people attending the debates, headed by well-known singer-songwriter Carlos Mendes, spontaneously began to sing “Grândola, Vila Morena,” a symbol of the peaceful Apr. 25, 1974 “carnation revolution” that overthrew the dictatorship that came to power in 1926.

“Grândola, Vila Morena” was used as a signal by a group of leftwing army captains to advance on Lisbon to oust Marcello Caetano, the successor to António de Oliveira Salazar and General Manuel Gomes da Costa. The three rulers were the heads of the longest European dictatorship of the 20th century (1926-1974).

The action in parliament was the result of “a group of activists on the day of the fortnightly plenary debate, who interrupted the prime minister’s speech by singing ‘Grândola’ at the very moment that the government party was making its point,” Mendes told IPS.

“It all took place in the context of actions planned to call people’s attention to the criminal austerity that is being imposed on us,” he said.

Mendes particularly stressed that “there were no insults or strong words; we simply sang, and the head of government had to stop speaking, drowned out by the chorus of voices singing ‘Grândola, Vila Morena’.”

In the two weeks that have passed since the protest in parliament, the prime minister and other government officials have been repeatedly interrupted in public by demonstrators singing the symbolic song, all around the country.

Another creative form of protest emerged three weeks ago, when the tax office began to receive electronic invoices in the name, and with the tax identification number, of Pedro Passos Coelho.

Previously cash register receipts served as automatic tax declarations for shopkeepers. Now the government is attempting to curb undeclared sales by shops and small businesses by providing a small tax rebate to customers who give their names and tax ID number.

But by the end of the third week of February, the tax office web site began to collapse under the flood of thousands of receipts with the prime minister’s name and tax identification number.

The “as faturas do coelho” account is the result of “a much wider movement that goes far beyond a Facebook page,” one of the organisers told IPS.

Its members prefer not to identify themselves individually, because “there is no name behind this page, and therefore we do not make individual statements.”

The spokesperson explained that “the (Facebook) account does not personalise the operation, nor does it credit the inventor with particular merit, but rather credits all the citizens who make this creative protest every day, ultimately contributing also to combating the deficit.

“The Facebook page will continue to contribute humorously, so that the action will continue,” the spokesperson said, adding that cash registers in large shopping centres are becoming jammed by the excessive use of the ministers’ tax identification numbers, as in these malls “one out of every three customers is shopping in the name of the prime minister.”

It is “a movement that is much more representative of Portuguese citizens than the prime minister would have us believe,” the spokesperson said, even though “he is right to say that one tree does not make a forest.

“However we, the people who are up in arms in indignation, are increasingly the forest,” the spokesperson concluded.