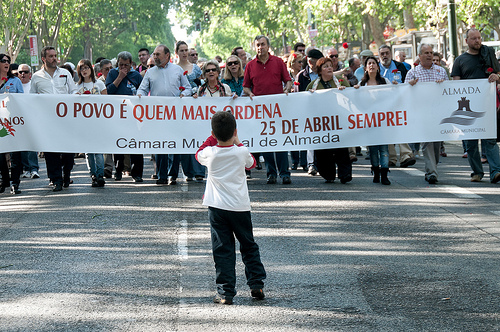 LISBON, Apr 25 2012 (IPS) - For the first time in 38 years, the former soldiers and officers who opened the doors to democracy in Portugal did not take part in the official celebration of the Carnation Revolution, which toppled Europe’s longest dictatorship in 1974.

The officers instead called a protest against the economic crisis and the austerity measures adopted by the government of Prime Minister Pedro Passos Coelho. The march down the Avenida da Liberdade ended with a demonstration that filled the huge Praça do Rossio, Lisbon’s main square.

Wednesday’s protest was supported by former socialist president Mario Soares (1985-1995), considered the “patriarch” of Portuguese democracy, who also declined the place of honour he traditionally occupies in the legislature, as a former head of state.

Retired colonel Vasco Lourenço, who was commander of the army forces in Lisbon during the coup, explained that the former officers did not participate in the official ceremony because “the political line followed by the current political leaders no longer reflects the democratic regime that was the heir to Apr. 25, 1974, as outlined in the constitution.”

Lourenço heads the 25th of April Association, made up of retired and active-duty members of the military who played a role in the coup that overthrew the dictatorship that governed Portugal with an iron fist from 1926 to 1974.

Over the past few months, the officers who led the Carnation Revolution – named for the flowers that people put in the barrels of the soldiers’ guns after the coup – have been criticising the government for destroying nearly all of the achievements of that historic event.

The so-called “captains of April” boycotted the ceremony in parliament but did not fail to commemorate the revolution, which marked not only the end of the 48-year extreme-right isolationist dictatorship but also of Portugal’s nearly 560-year colonial empire.

In the space of just a few hours 38 years ago, the Movimento das Forças Armadas (MFA – Armed Forces Movement) – a revolutionary movement led by 144 left-wing junior officers tired of the colonial wars raging at the time in Portugal’s “overseas provinces” – removed the heads of the armed forces and made way for democracy by calling for elections for a constituent assembly.

Since then, Portugal had not experienced the kind of social unrest seen today, a reaction to the tough austerity measures adopted by the conservative government of Passos Coelho to reduce the fiscal deficit, a condition imposed by the “troika” of creditors – the International Monetary fund (IMF), the EU and the European Central Bank (ECB) – that approved a 110-billion dollar financial bailout for Portugal in 2011.

A reform of the labour code that is making its way through parliament will also make it easier to hire and fire workers, eliminate the holiday bonus salaries, limit unemployment benefits, reduce the number of public holidays, cut overtime pay, allow a longer workday, and slash the number of vacation days.

In his speech to thousands of protesters, Lourenço said “the government does not serve the elected officials but the voters, and therefore cannot sell the country to the economic and financial powers-that-be.”

“Elected officials no longer represent Portuguese society (when they try to) legitimate the dictatorship of the markets, because the people did not give parliament the power to hand over that authority,” the retired officer told the demonstrators, many of whom were older people who personally lived through the Carnation Revolution.

Lourenço added that due to the draconian measures imposed by the troika, Portugal “is now a protectorate” that follows the dictates of “Merkozy” – an allusion to the real power-holders in the EU: the government of Germany led by Chancellor Angela Merkel and the French government headed by President Nicolas Sarkozy.

“We aren’t boasting of being the saviours of the nation, but we do say the military knows how to stand firm in the defence of its people,” he said.

For his part, Soares said that thanks to the April Revolution, “everything changed and there is no comparison to the past of poverty, war and dictatorship, in which Portugal was ‘gloriously alone’ (a famous phrase of dictator Antonio de Oliveira Salazar) during 48 years of cruelty.”

The pluralist democracy ushered in by the revolution “had a great influence in the establishment of many democracies, especially in Spain, Greece and Latin America, without excluding our beloved Brazil, which at that time was also dominated by a dictatorship (1964-1985),” he added.

However, “we are now experiencing a crisis that came from outside, from the United States and from the rest of Europe, which has a great deal to do with the current incapacity of many leaders on this continent, who blindly believe in austerity policies and are not concerned about the exponential growth of unemployment or the paralysis of economies in recession,” he said.

Soares explained to IPS that his stance in the protest held on this year’s anniversary was “of solidarity with the April heroes” at a time when the government of Passos Coelho is “destroying social achievements like social security, education and healthcare by means of privatisation and the limiting of the rights of the Portuguese.”

The former president said the austerity policies are leading to the “impoverishment of millions of Portuguese…(which) is not leading us anywhere, or more precisely, is leading us from bad to worse every year.”