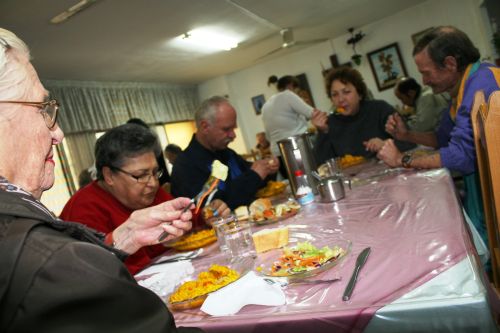 Thirty people eat lunch every day at the Emaús soup kitchen in Torremolinos, on the outskirts of Málaga. Credit: Inés Benítez/IPS

MÁLAGA, Spain , Nov 14 2012 (IPS) - A huge pot of rice steams on the stove at the soup kitchen run by Emaús in the municipality of Torremolinos, on the outskirts of this southern Spanish city. This morning, like every other, Pepi, Adriana and Diego are cooking for over a hundred people who can no longer afford to feed themselves.

As the already record-high unemployment rate climbs and growing numbers of people are evicted from their homes because they cannot keep up on their mortgage or rent payments, the economic crisis in Spain has also led to an upsurge in the number of people depending on soup kitchens, most of which are run by non-profit organisations or private foundations that receive government funding.

“My mother is out of work and she has three children,” Dominican immigrant Dariana, 18, tells IPS while stopping by the Emaús soup kitchen at noon to pick up servings of rice, salad, sandwiches, bread and fruit for the four members of her family.

Emaús, a Catholic humanitarian organisation with six employees and numerous volunteers, delivers meals to the homes of sick and elderly people as well as distributing food at its headquarters in Torremolinos. At around 12:30 every day, people begin to queue up, waiting to take away bags of food. An hour later, others will sit down to eat lunch in a dining hall with room for 30.

“I never imagined that I would have to come here and ask for food,” remarked Jessica, 29, holding her two-year-old daughter Janira’s hand. She lives in her mother-in-law’s house, but has been coming to Emaús for two months because she and her husband have both lost their jobs and have no income anymore, “and there are four mouths to feed,” she told IPS.

In the past few years, poverty has become “more extensive, intensive and chronic” in Spain, according to a recent report by the Spanish branch of Caritas, another Catholic organisation. Food is one of the “basic needs in highest demand” in Spain, followed by housing and employment, the report says.

More than 21 percent of the population of 47 million is living below the poverty line this year, according to the Economically Active Population Survey conducted by the National Institute of Statistics (INE). The survey also found that 12.7 percent of households have difficulty making ends meet at the end of the month, and 7.4 percent are behind on the payment of housing-related costs.

“There are more and more people asking for food. It’s overwhelming,” Pepi comments to IPS while stirring the rice. “Most of the people we help have homes, but they can no longer afford to buy food.”

Working alongside Pepi is Diego, who is unemployed and has volunteered at Emaús since July. He is putting the finishing touches on the salad, while Adriana, who came to Spain from Uruguay in search of a better life, is busy chopping Swiss chard that will later be stored in freezers.

The president of Emaús, Antonio Abril, told IPS that the profile of people who use soup kitchens has changed since the global crisis that erupted in 2008 in the United States spread to Spain and other countries of the European Union.

In the past, the organisation almost exclusively served the elderly. But today its clientele has expanded to include “younger people who live on the street or are squatters or have been evicted.”

To eat at Emaús, “the only requirement is to be poor,” said Abril.

The people who come to the organisation for help are referred by the Málaga city government’s social services and must be registered residents of the municipality, Luis Romero told IPS. Romero, a retired teacher, was one of the three founders of Emaús in Torremolinos 16 years ago. The organisation also runs soup kitchens in Estepona, in the province of Málaga, and in Guadix and Baza, in neighbouring Granada.

Every day, two Emaús workers head out in a van to pick up donations of fruit, vegetables and other food products from the Málaga food bank, private businesses and charitable foundations whose contributions make it possible to prepare free meals from Monday to Saturday.

At 1:30 in the afternoon, the dining hall at Emaús headquarters in Torremolinos is ready for 30 diners. The tables are covered in pink tablecloths and set with plates and cutlery. The walls are decorated with religious-themed paintings, crowned by a large wooden cross and two cages with bright yellow birds.

“Thank goodness we are here and we can survive,” Marco comments to IPS while eating rice. Originally from Poland, Marco lost his construction job four years ago, and has been eating at the Emaús dining hall for the past year. He lives with his sister and niece, who are also unemployed, and is six months behind on his housing payments.

Due to the rise in unemployment, which is over 25 percent – the highest rate in the EU – a growing number of people can no longer meet their mortgage payments and are consequently evicted. But even when they end up on the street, they still owe the bank the pending payments.

Sitting at the table with Marco is Halina, a Belarusian woman with short curly hair. After she arrived in Spain in 2003, she found work in the hotel industry. But she lost her job, her welfare benefits ran out, and now she has “nowhere to sleep.”

The oldest of the diners is 94-year-old Encarnación, who has put on bright red lipstick for her visit to Emaús. She comments that “lately a lot of young people have been coming here to eat because there’s no work.” Romero adds that, normally, there are more men than women at the lunch tables, and regulars include immigrants, people who sleep in cars and doorways, and a few mentally ill people.

“There has been a remarkable increase in middle-class people who have found themselves forced to ask for food,” volunteer Felisa Castro, one of the founders of Ángeles Malagueños de la Noche (Málaga Angels of the Night), told IPS.

Founded three years ago, this non-profit organisation runs on donations and the work of volunteers who deliver hundreds of breakfasts, lunches and dinners daily. The meals are prepared in a small house in a central neighbourhood of Málaga, this southern Spanish city that for many years was a popular destination for immigrants seeking a better life.