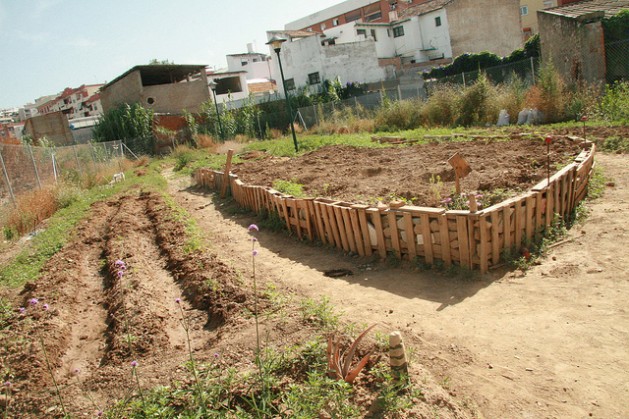 MÁLAGA, Spain, Jun 13 2012 (IPS) - The economic crisis is fuelling the search for less individualistic ways of life in Spain, and a growing interest in urban agriculture has given rise to flourishing community gardens on vacant lots in cities and towns.

“I think it is essential for people to have access to spaces for activities and for getting together, because the crisis is social as well as financial,” one of the promoters of the El Caminito urban garden in the central neighbourhood of Fuente Olletas in the southern city of Málaga, who asked to be cited only as Jorge, told IPS.

El Caminito has occupied a vacant lot, on temporary loan from the Málaga city government, since mid-2011. After preparing the soil, the group planted trees and vegetables like tomatoes, garbanzo beans, maize, avocado and broccoli on a 100-square-metre area.

“The crisis we are experiencing is leading to a paradigm shift. Urban vegetable gardens are related to the breakdown of the economic system and of traditional social movements,” said José Luis Fernández, in charge of vegetable gardens for the Regional Federation of Neighbourhood Associations of Madrid (FRAVM), which has 260 member organisations.

Spain is one of the European Union countries worst affected by the global financial crisis that first broke out in 2007, and the right-wing government of Prime Minister Mariano Rajoy has imposed severe economic cutbacks that are shaking the foundations of the welfare state, in order to reduce the fiscal deficit by over three percent of GDP this year compared to 2011.

Unemployment has soared to 24 percent. And the director of United Nations Children’s Fund (UNICEF) partnerships in Spain, Andrés Conde, pointed out on Jun. 8 that 26 percent of children in this country are living below the poverty line. Within the EU, only Bulgaria and Romania exceed this figure.

Urban gardens began to emerge about six years ago, but they have really bloomed over the last two-and-a-half years. In the Madrid region alone there are more than twenty, managed by neighbourhood associations, universities, environmental groups and the Madrid city government.

Many neighbourhood assemblies, derived from the 15M movement which has been pressing for more participative democracy since major protests erupted on May 15, 2011, are joining forces with community associations to multiply the number of vegetable gardens.

“The main thing is that we have autonomy to manage the garden. It is pure participative democracy,” said Jorge. Some 15 people around the age of 30 participate directly in the work and assemblies of El Caminito, but more people are linked to it, including children and elderly people.

Fernández of FRAVM said that they are trying to put the community gardens on a legal footing, as 85 percent of them are outside the law. In these cases vacant lots, usually unused public spaces, have been occupied, or the plots are loaned on a “very precarious, tenuous” footing.

He called for public institutions to organise a legal framework for the vegetable gardens, and said urban planners should take them into account in the same way as green areas and other city spaces.

“Urban gardens not only recover unused spaces, but are also meeting places and open air social centres that promote values,” he said.

In his view, city authorities are not opposed to community gardens, but “lack political will” and “are afraid” that the citizens’ movement may be strengthened in the process.

As an example he described the Adelfas community garden in a Madrid neighbourhood, which he said is a meeting place for new neighbours, dynamises the organisations that already exist in nearby schools, and includes in its activities a nearby home for the elderly.

It also provides an opportunity to learn gardening techniques, he said. Cultivating a plot of land helps people think about and discuss complex problems, like urban sprawl, the monopoly held by food distribution companies and the problems associated with transgenic crops.

The vegetable gardens seem to catalyse the creation of self-managed neighbourhood cooperatives and consumer groups.

“Without a hands-on relationship with plants, you don’t value agricultural activities,” said Fernández.

He said landscapers, agronomists and others who are part of Spain’s more than five million unemployed find in the gardens a niche where they can put their knowledge to work in the service of a collective project.

Jorge added that community gardens bring people together in networks of like-minded people, and expand social life at a time when “people are going around numb and half-asleep.”

At Adelfas there are monthly assemblies, collective work days and “open house” days, as well as maintenance committee meetings, workshops and talks.

Each garden is independently organised, but they are all managed in a participative way, generating a sense of community, contributing to raising self-esteem and creating mutual support networks.

“Our way of life prevents contact with our neighbours and with nature,” Victoria Barceló, one of the organisers of a community garden in the province of Málaga, complained to IPS.

She said her involvement in urban gardening had given her “a sense of belonging” and opened up a doorway to greater awareness and concern about her own health and nutritional habits.

“Urban gardens show that alternatives to current policies can be put into practice at local level,” said Esther Vivas of the centre for studies on social movements at the Universitat Pompeu Fabra, a university in the northeastern city of Barcelona.

Vivas told IPS that the gardens provide concrete solutions – like self-sufficiency – for specific problems, and also have a learning component.

“We have to get rid of all these weeds. There’s a lot of work to be done here,” 76-year-old Rafael Gálvez, a native of Málaga, told IPS as he hobbled around the garden leaning on a cane, accompanied by his dog.

Gálvez was a rural worker for many years. Now only a metal fence separates the El Caminito vegetable garden from the small shack where he lives because he cannot afford to rent a decent place on his meagre pension.