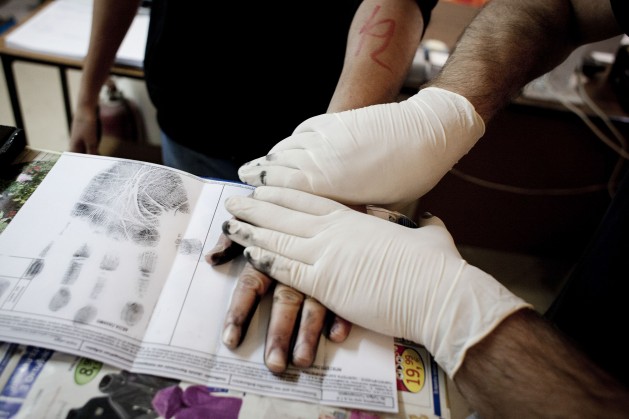 ATHENS, May 28 2014 (IPS) - The evolution of immigration and border control policy in Greece and its interdependence with European funding suggests an agenda which has been decided above national legislatures with strong coordination between European political actors and economic interests, while ignoring the human suffering it produces.

Earlier this week, a Greek court considered the premises of this decision to be against national and European legislation and asked for it to be revoked. Authorities have yet to react to this decision.

Since the summer of 2012, when police launched a crackdown policy on irregular immigrants with ‘Operation Xenios Zeus’, administrative detention has been implemented on a massive scale, often applied for the maximum period of 18 months.

Now the opinion of the Council of State considers this extension to be not ‘detention’ but a restrictive measure for the benefit of immigrants who otherwise, if released, could be exposed to situations of danger.

“Prolonged and systematic detention is leading to devastating consequences on the health and dignity of migrants and asylum seekers in Greece” – Doctors Without Borders
Detention has been denounced as ineffective and inhumane by various international organisations and local NGOs. Doctors without Borders called the measure an “appalling sign of the country’s harsh treatment of migrants”.

In a new report published last month regarding living conditions in detention camps in Greece, the organisation warned that “prolonged and systematic detention is leading to devastating consequences on the health and dignity of migrants and asylum seekers in Greece.”

While attracting severe criticism, the Greek authorities show no intention of relaxing their harsh measures. On the contrary, the tendency towards stricter controls appears to be in line with the European Commissions (EC) guidelines and funding rearrangements.

In September 2012 , a month after Greece launched Xenios Dias, the implementing rules of the Return Fund were amended, introducing several changes, including the possibility of financing infrastructure projects such as renovation and refurbishment or, in case of specific needs, construction of detention facilities.

The Return Fund is the European structure that finances the majority of immigration control projects throughout Europe.

Further, last year the Commission proposed an amendment increasing the EU co-financing rate, among others, of immigration control-related projects to be covered by the European Return Fund and the External Border Fund (from 50 or 75 percent by 20 percentage points).

The amendment would not result in any increase in EU funding, but it would allow the Member States concerned to decrease compulsory national co-financing.

In the case of Greece, the compulsory national co-financing for projects could be decreased from 25 to 5 percent. The legislative proposal was adopted in spring 2013.

Danai Angeli, a researcher with Greek ELIAMEP think-tank that runs ‘MIDAS’, an immigration control policy cost-effectiveness research project to be concluded later this year, told IPS that the interdependence of Greek policy and EC support cannot be questioned.

“The practice of systematic detention would have been impossible without the support of European funds,” Angeli told IPS. “Without these resources, the focus in Greece would possibly shift to alternative solutions that would take much more into account a cost-effectiveness approach and detention would have never acquired the status of a political priority.”

Despite the obvious cost in human suffering, the policy of en mass detentions is not only the prominent choice in the EU but, according to Dr. Martin Lemberg-Pedersen, a migration expert at the Centre for Advanced Migration Studies in Denmark, it appears to coincide with an agenda of militarisation and privatisation of border and irregular immigrant controls.

”Despite public statements condemning the humanitarian catastrophe at the EU’s external borders, the union has in fact never ceased its support for more and harsher border controls in the south-eastern European borderlands,” Pedersen said.

“We can view this double standard as a way for the union to continually make itself a relevant policy venue in a Europe, where anti-immigrant parties occupy an increasingly larger part of both national parliaments and the European parliament.”

In December last year, the European Commission announced the launching of EUROSUR, a major project that will allow constant surveillance of the Mediterranean.

Although it has been introduced by the EC as ‘a new tool to save immigrants’ lives’, it has been criticised by organisations and MEPs, including leading German member of the European Green Party  Ska Keller, as an instrument “to serve the battle against illegal immigration”.

Also in December last year, the Council of the EU produced a proposal “establishing rules for the surveillance of the external sea borders”, and ten days later the European Council’s annual summit set priorities in increasing effectiveness of the defence policy and operations capacities of the Union.

“EUROSUR is a prime example of what we can call regulatory capture, that is, processes of lobbyism and multi-level governance, where actors like private security and military companies, and of course the European Commission itself, are able to transform the border control policies of individual nation-states without having to engage directly with their national parliaments,” Pedersen told IPS.

In April this year, four months after the annual summit, the Greek Ministry of Maritime Affairs quietly initiated a tender to rent surveillance services for its naval borders at the Aegean sea.

The project envisaged compensation of 73,800 euros for 60 hours of surveillance over a period of two months, an average of 1,230 euro per hour, with 75 percent of the cost covered from European funds and 25 percent from national.

Privatisation of security services in three of the biggest detention centres in the country has also been planned, attracting major players from the private sector like G4S, the world’s largest private security firm, which has come under criticism for the treatment of detainees at its three U.K.-based asylum centres.

The costs, estimated to about 14 million euro annually, will also be covered mostly from European funds.