This is the first of a two-part series on European funding enabling anti-migration operations in Greece. 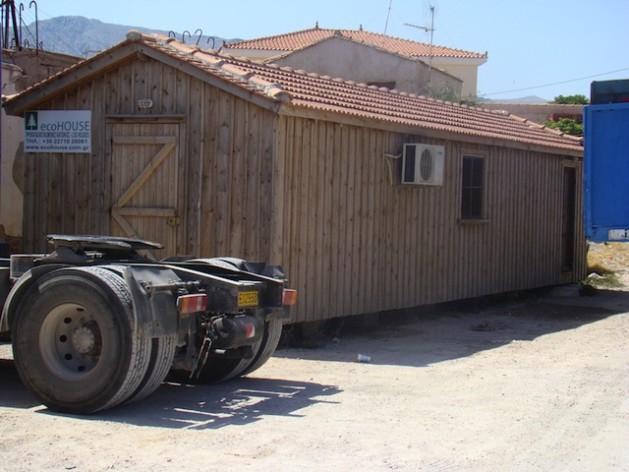 A 35-square-metre facility in Chios Island in the Aegean Sea, where more than 50 migrants and refugees have been held. Credit: Apostolis Fotiadis/IPS

An activist who cooperated with Human Rights Watch (HRW) after the war broke out in Syria, Alhamauun was injured last summer in a bombing outside the northwestern city of Aleppo.

Despite his serious leg injury he was held in a detention camp in Greece’s northeastern Orestiada region, where he claims his belongings and money were confiscated upon his arrest and never returned to him.

Afterwards he was verbally and physically harassed multiple times.

Alhamauun says he complained about his treatment to a delegation of European officials who visited camp Fylakio where he was detained last October.

“After they left I was physically abused for talking to them,” he told IPS in an exclusive phone interview. Alhamauun went on a hunger strike in protest of his plight, and was hospitalised before finally being returned to Turkey.

His story is not unique here, where funding from the European Commission is enabling massive migration control operations that have resulted in a slew of human rights violations.

Funding extensions for the coming months are being considered, despite European officials having full knowledge of the indiscriminate detention of asylum seekers, as well as the inhumane conditions in detention centres across the country.

Last August, Greek police deployed 1,881 new officers along the river Evros in “Operation Aspis”, an attempt to seal the border with Turkey, through which Syrian refugees were pouring into Greece.

Meanwhile, the continuing countrywide “Operation Xenios Zeus” has led to 4,849 arrests of irregular migrants or refugees and over 90,000 apprehensions based on heavy racial profiling by authorities.

Commencement of these operations coincided with the beginning of a major humanitarian crisis in Syria, with fighting transferred into big urban centres and the number of refugees fleeing to neighbouring countries skyrocketing.

In order to accommodate arrested migrants, the government has begun transferring detainees to improvised camps that were former police academies and old army depots, such as Xanthi and Komotini in northern Greece, Korinthos in the Peloponnese, and Paranesti in the northeastern region of Drama. These buildings, as former inmates like Alhamauun disclosed to IPS, are often black holes for human rights.

Asylum-seekers are also kept in local police departments’ cells or other makeshift facilities throughout the country. The detention period can last anywhere from 12 to 18 months.

A December 2012 report by ‘The Guardian’ presented serious allegations that the successful police operation in Evros involved the pushback of Syrian refugees arriving at the northeastern border.

Lathra, a refugee rights group based on Chios island, recently reported that the coastal guard is holding large numbers of migrants – among them Syrian refugees, pregnant women and children – in a 36-square-metre wooden container in the port.

Since last August at least 84 people, including Syrians, have died in shipwrecks off the coast of Turkey attempting to reach Greece.

Although operations like Aspis and Xenios Zeus have been largely “successful” from the authorities’ point of view, Greece has limited resources with which to continue them.

It appears that the European Commission is aware of the results of these operations, since it embarked on a fast-track monitoring mission of the northern Greek border and detention camps last September.

The Commission has admitted in correspondence with IPS that the purpose of the trip was to assess funding required for these operations.

Since then, multiple delegations of European officials and international organisations have given negative testimony on the situation in Greece.

On a visit to Greece between Oct. 28-30, a Civil Liberties, Justice and Home Affairs Committee (LIBE) called for the closure of certain detention camps and encouraged Greece to speed up the creation of a new asylum system that would transfer responsibility from the police to a civilian structure.

Two weeks earlier, on Oct. 8, 2012, Home Affairs Commissioner Cecilia Malmstrom herself visited at least one of the detention centres in question.

In her personal blog the Commissioner wrote that she spoke with detained asylum seekers, adding, “The humanitarian conditions are very basic, in some places downright awful. Some centres should be closed down entirely; others are newly opened and quite OK.”

But in an interview with IPS back in August 2012, Doctors Without Borders (MSF) described the conditions in these new centres in Xanthi, Komotini and Korinthos as “substandard”.

Only the Amygdaleza detention centre in Athens has been universally described as an acceptable place.

Despite these findings by experts and officials, migrants have little access to redress.

Four Syrians arrested with Alhamauun were found guilty for initiating a riot inside Fylakio camp, for which Alhamauun was acquitted. Court cases against troublemakers, who are mostly protesting conditions inside detention camps, are a new phenomenon in Greece, following implementation of the migration policy put forward by Police Minister Nikos Dendias last August.

At the beginning of October 2012, fifteen migrants went to court in the northwestern coastal city of Igoumenitsa for escaping from a camp that has lately gained a reputation as “the worst in the country”.

After hearing that their detention involved extremely harsh conditions, including being locked up on a 24-hour basis, the court ruled that the situation was a “violation of the European Convention of Human Rights” and the European Returns Directive, and acquitted them.