This is the first of a two-part report on extraordinary measures the EU is taking to keep unwanted migrants out of the EU. 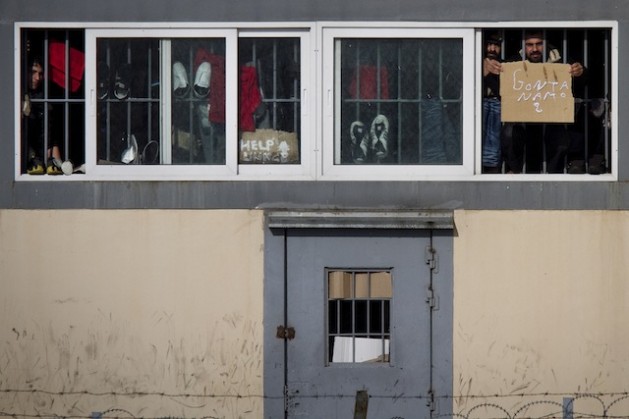 A detention camp at Evros in Greece. The placard an inmate holds up says ‘Guantanamo’. Credit: Nikos Pilos/IPS.

Frontex, the EU border agency, has financed major weapons and security equipment producers to present their equipment in demonstrations. European national border guards have participated in these demonstrations as potential customers, IPS learns.

Frontex confirmed to IPS that the agency has been paying weapons and security equipment manufacturers to participate in demonstrations of equipment which national agencies attended as potential customers.

“The payments made to the companies to cover the costs incurred by them to participate in the demonstration in Aktio varied from 10,000 euros to 198,000 euros,” said Frontex.

U.S.-based Lockheed Martin, French Thales and Israeli IAI are among the biggest weapons and security equipment producers in the world.

The demonstrations are part of the preparation for the launch of EUROSUR, the European External Border Surveillance System meant to enhance cooperation between border control agencies of EU member states and to promote surveillance of EU’s external borders by Frontex, with a particular focus on the Mediterranean and North Africa, in view of controlling migration to Europe.

EUROSUR is one of the two main elements of Europe’s new border management regime along with ‘Smart Borders’ which will put in place an ‘Entry-Exit System’ (EES) to identify visa overstayers, and establish a Registered Traveller Programme (RTP) to enable pre-vetted individuals to cross borders faster. The system would rely heavily on use of biometrics and on the collection of a huge database of passenger personal information.

A legislative package setting up EUROSUR was approved in mid-November this year by the European Parliament’s civil liberties committee and is expected to receive a final go-ahead soon from the entire Parliament and by the European Council, the EU’s executive. Meanwhile, preparations for EUROSUR are advancing away from public scrutiny.

The demonstrations of market ready equipment are a significant measure in the steady construction of a new EU border management system. Through 2014-2020 member states will be encouraged to buy such equipment with support from the EU budget.

The Commission estimates that the creation of EUROSUR could cost up to 338 million euros. ‘Borderline’, a study of the EU’s new border surveillance and control system published by the Heinrich Boll Foundation, claims the costs could “easily” end up as high as 874 million euros. The Commission refutes the higher estimates.

The ‘Smart Gates’ initiative is estimated by the Commission to cost 400 million euros for setting up plus an additional 190 million euros annually in operating costs.

According to the Borderline study, “despite the absence of any draft legislation, or even an agreement in principle on introducing smart borders in the EU, the Commission has already allocated 1.1 billion euros to the development of an EES (EU Entry Exit System) and RTP (EU Registered Traveller Programme) from the proposed EU Internal Security Fund (2014-2020).”

The Internal Security Fund is meant to be a new component of the future EU budget (2014-2020), replacing the existing External Border Fund. According to a Commission proposal, the Internal Fund would be 4.648 billion euros annually, and among its strategic priorities will be “to finance the setting up of the EES and the RTP as well as the introduction and operation of the EUROSUR, notably through “the purchase of equipment, infrastructure and systems in member states.”

It would also “boost the operational potential of the Frontex Agency by inviting member states to earmark additional resources under their programmes for specialised equipment which can be put at the disposal of the Agency for its joint operations.”

In early December, the European Parliament gave a green light to the Internal Security Fund. Now only Council approval is needed for it to become operational – member states are expected to make a final decision on the next EU Budget in February 2013.

“The European border security policy is going in the wrong direction,” Green euro-parliamentarian Ska Keller told IPS. “Against the background of pervasive budget cuts and austerity measures, it is unbelievable that the EU is spending millions of euros for ‘smart gates’, UAVs, and other surveillance technologies.

“And it is even more shameful that those who profit most from EUROSUR and ‘smart borders’ are the big European defence contractors.”