This is the second of a two-part report on extraordinary measures the EU is taking to keep unwanted migrants out. 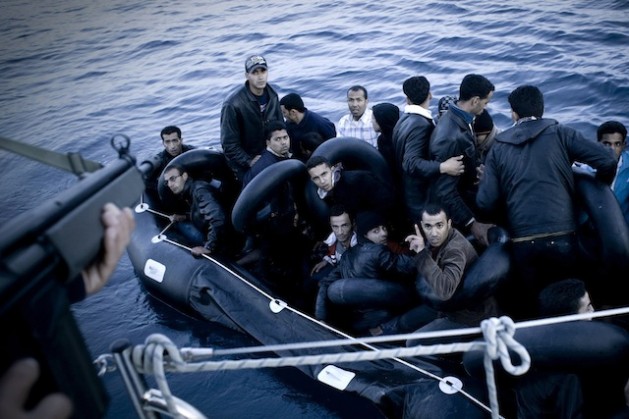 Migrants picked up by the Greek coastal guard in the Mediterranean just in time after destroying their boat to make sure they get arrested. Credit: Nikos Pilos/IPS.

ATHENS/WARSAW, Jan 11 2013 (IPS) - Publicly funded research is paying towards security systems that the EU is inviting major multinationals to put together to keep unwanted migrants out.

The new EU approach to border security started to be implemented in 2004 with the setting up of the European Security Research Programme (ESRP). This went on to become a part of the EU’s 7th Framework Research Programme (FP7) under the current seven-year EU budget for 2007-2013.

The ESRP and FP7 have been increasingly used to finance research for the development of EUROSUR and ‘Smart Borders’ – two critical measures to toughen EU borders.

‘Smart Borders’ will put in place an ‘Entry-Exit System’ (EES) to identify visa over-stayers, and establish a Registered Traveller Programme (RTP) to enable pre-vetted individuals to cross borders faster. The system would rely heavily on use of biometrics and on the collection of a huge database of personal information.

Major weapons and security equipment manufacturers have been members from the start of boards advising the European Commission on research to be financed from ESRP and FP7.

According to ‘Borderline’, a critical study of the EU’s new border surveillance and control system published by the Heinrich Boll Foundation, the corporations Finmeccanica, Thales, EADS (a European corporation including Airbus, Astrium, Cassidian and Eurocopter), and Sagem, as well as industry lobby groups have been members of successive European Security Research advisory boards, alongside Frontex and national border control authorities.

In 2006, the European Security Research Advisory Board was co-chaired by an EADS director Markus Hellenthal, who then went on to work for Thales.

In 2007, the European Security Research and Innovation Forum brought industry and European policy makers together again, this time to create a 20-year vision for the ESRP, according to the Borderline report. This ‘Working Forum 3’ was chaired by Frontex, with Italian producer Finmeccanica as Rapporteur.

The Forum developed the integrated borders management concept and advised that the development of affordable equipment for this task be a priority for EU member states.

According to the European Commission, industry was not predominant on these boards: the FP7 advisory group, the EC wrote in an email response to IPS, included representatives from the German and Polish civil protection services, national authorities, universities and research institutes, and the Israeli Red Cross.

But companies on the advisory board benefited from the security research funds from FP7 programme. These funds allocated significant sums to EUROSUR and to the ‘Smart Borders’ development.

Approximately 200 million euros were allocated to “intelligent surveillance and border security” from FP7. The security branches of major producers such as Thales, BAE, IAI or EADS usually benefited from these funds, in partnership with research institutes among other actors.

As the research projects were being implemented, Frontex has been creating opportunities for national border control authorities, European Commission representatives and industry players to meet routinely and to exchange views on what equipment may be necessary to member states to implement EUROSUR and ‘Smart Borders’.

“We do not do any research ourselves,” Edgar Beugels, Director of Research and Development at Frontex told IPS on the sidelines of a business-end users conference on ‘Smart Borders’ in September in Warsaw.

“We rely on research done by others – international research agencies, industry, universities, member states – we try to find out what they are doing and pass this to our end users (national border authorities and the Commission). Meanwhile, we collect a wish list from end users and transfer that back to the research community.”

At the Warsaw event, national authorities spoke about their border control plans in the main conference room while companies presented technology suited for those plans on the sidelines. Apart from such exhibitions, Frontex – which is the coordinator for EUROSUR – organises demonstrations where bigger equipment can be tested.

Frontex spokespersons interviewed by IPS did not deny that ideas for research projects submitted later to FP7 could be born during the conferences they sponsor, but said the agency does not play an active role in this process.

Responding to questions from IPS whether convergence between industry and the Commission on security equipment research and promotion and acquisitions by member states constitutes a conflict of interest, the European Commission said: “Industry representatives are quintessential for a technology oriented theme such as the Security Theme. It is not possible to get an expertise on the technical feasibility of a research project without industry representation.

“The implementation of a research project is not feasible without a company that can turn the theoretical analysis into a functioning technology,” stated the office of Marco Malacarne, head of Security Research and Industry in the Directorate General Enterprise at the European Commission, in a written response to IPS. “Initiating security research without technological partners would be an inexcusable waste of public money.”

But others doubt that this link between EU institutions and business is useful or necessary. “What we are witnessing here is an unholy alliance between business interests and political hardliners,” Ska Keller, member of the European Parliament told IPS. “Surveillance technology is the wrong answer to migration challenges. The way forward is not drones but improved, Europe-wide standards for asylum seekers and more solidarity and burden-sharing among member states.”

The European Commission clarified in a letter to IPS that the way Frontex is involved in the creation of EUROSUR and the promotion of market ready security equipment is entirely within the limits of European legislation.

The industry’s participation in the new border regime does not have a military aspect, the Commission letter says. Instead of any conflict of interest in the convergence of the industry with the Commission and Frontex over the development and production of security-oriented equipment, the Commission sees a legal obligation of the European Union to support its industry (although some of the companies are not entirely or at all European).

The full EU response to an earlier draft of this report can be read here.