ATHENS, May 18 2013 (IPS) - With no end in sight for the ongoing two-year war in Syria, the ensuing humanitarian crisis continues to escalate, with over 1 million refugees having fled to neighbouring countries and at least another 3 million displaced within Syria.

Despite the staggering human cost of the war, however, the international community is very close to failing these refugees, warns Panos Moumtzis, UNHCR regional coordinator for Syrian refugees. 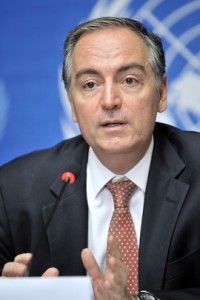 All sides “appear to be committed only to military means for resolving the conflict”, Moumtzis told IPS, a decision that is leading to what he called “a massive exodus of people”.

Moumtzis has extensive experience in crisis management, having worked in Gaza, Iraq, Bosnia and Kosovo, and other countries with humanitarian emergencies. He describes the Syrian crisis as one of the most acute crises he has ever seen.

IPS correspondent Apostolis Fotiadis spoke with Moumtzis about the situation in and surrounding Syria and the role of the international community in this crisis.

Q: What are the characteristics of the Syrian refugee population?

A: Most of the refugees are Sunni Muslim. Three quarters of those crossing the border are women and children. More than half are children. A large percentage of the men you see in Iraq are mainly Kurdish and wanted to escape conscription, which is a concern of many Syrians as well.

The father in one family I met told me, “In a few months my son will be 18, so we decided to take him out of school and leave the country, before it is too late and he is called to serve.”

Tens of thousands of soldiers have also left the Syrian army. A camp in Jordan, specially assigned for them, holds 20 to 30 thousand of them. But these are not refugees. Anyone who crosses the border with a gun needs to pass a period of six months without a gun or uniform before we accept him as a refugee.

Q: How many people have moved out of Syria so far, and what is the size of your regional operation?

A: Out of approximately 1.25 million refugees, 25 percent of them are in camps. This means another 75 percent is in cities and villages.

There are 17 camps in Turkey with 196,000 people, with three more being built now. Each of those is to host another 10 to 20,000. There, UNHCR advises the government, and we also try to monitor legal issues that occur for refugees and monitor registration in order to keep track of people’s special needs.

We also try to ensure that no recruitment of guerillas takes place in the camp or any kind of military activity happens there.

We run two camps in Iraq and another three in Jordan. Turkey provides things we are unable to offer in our camps, like hot water, three meals per day, and whoever gets married goes on a month holiday. It is very important that camps strictly maintain a civilian character.

Q: How fluid is population movement? Do people return to Syria while others escape the country?

A: We have had spontaneous returns in the last three months. Very often people want to go back and see their houses. Men bring the family out of Syria and then return to check on their property.

Q: If the situation in Syria calms down, how easy would be for refugees to return there?

A: We would suggest that people stay outside Syria for some time until we know an agreement or deal is implemented.

The ones close to the borders whose houses have not been destroyed would return first, whereas people living in Baba Amr at Homs would be the last to return, since the area is devastated.

We are interested in that returns are voluntary, that no one pressures people to return, and that people know what they will face when they return.

Still, in every conflict there are people that cannot return. If the regime changes, for instance, we would see Sunnis going back and ethnic minorities leaving the country.

Q: Has the international community stood up to the task of dealing with the humanitarian disaster in Syria?

A: U.N. agencies estimate that meeting these refugees’ needs requires 1 billion dollars for surrounding countries and another 500 million for those inside Syria. We now have 30 percent of this budget, so we must assess the most urgent needs.

One should also consider the failure of the international community to give a political solution to the Syrian civil war.

Q: Has the international community failed Syria because of the many different geopolitical interests involved in this crisis?

A: It is better to say that the international community has failed politically until now. Humanitarian assistance is an alternative, so we can say they are offering something for this failure.

But there are so many forces inside Syria right now that make the resolution of this conflict a very complicated task. The uprising against a family regime has turned into a war that increasingly resembles a fight between Sunni and Shia, a fight of Hezbollah and Iran against Qatar, Saudi Arabia and the United States, as well as a war in which Al Qaeda has intervened.

Q: Many voices warn about a domino effect, with the war spreading into Lebanon. Are these warnings valid?

A: This is not a theoretical danger. It’s a real threat. Overall, Lebanon seems very unstable at the moment, and the bad economic situation in the country does not help. Many times we have to ask our personnel not to do certain things because of the uncertainty.

In Tripoli, people have been killed in armed incidents. A bomb was placed in Beirut three months ago. There is also tension at Sirte, in the south, due to the Hezbollah presence there and in the Beqaa valley as well.