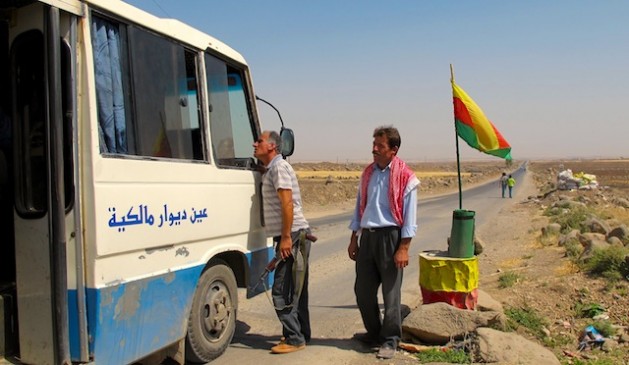 GIRKE LEGE, Syria, Aug 24 2012 (IPS) - The smuggler wants 200 dollars but Jewan negotiates him down to 100. That’s still a lot for this 26-year-old Syrian Kurd, but he can hardly wait to cross the border to Syria from Iraq. It’s been three years since he last saw his family.

Those were difficult days in Syria. “I was arrested and tortured for 27 days for belonging to a university youth organisation,” the young Kurd recalls as he follows the smuggler at night.

“I was freed after my parents paid 2,000 dollars to a police officer. I fled to Lebanon and I finally arrived in the Iraqi Kurdistan region via Turkey.”

This IPS reporter met Jewan at the sensitive point where the borders of Turkey, Iraq and Syria meet. The point is 450 kilometres northwest of Baghdad, 550 km southeast of Ankara and 800 km northeast of Damascus.

Spread across Turkey, Iran, Iraq and Syria, stateless Kurds number about 40 million. About half live on Turkish soil. Between two and four million Kurds live in north-east Syria. Syria was carved out of the Turkish Ottoman Empire less than a century ago.

After a wave of protests in late July, Syrian President Bashar al-Assad loosened his grip on Syria’s Kurdish region. Local Kurdish leaders now claim control over half their territory, including the border posts with Iraq’s Kurdish Autonomous Region. It is to this region that Jewan was returning.

A few minutes later we are dazzled by flashlights of the peshmerga – the Iraqi Kurdistan region’s military forces. Neither Jewan nor his guide seem to pose a threat, so we are finally allowed to walk towards a light a few hundred metres away. Apparently, that is the first checkpoint on the Syrian side.

In the middle of the dark, halfway across ‘no man’s land’, they come across a pick-up van with its engine on and lights off. The driver and his companion introduce themselves as “PKK (Kurdish Workers Party) fighters” – a guerrilla group fighting against Turkey since 1984.

“We have to wait here, somebody else is coming,” explains one of the fighters with an assault rifle over his shoulder. A few minutes later, a line of men come out from the dark to load bags and boxes on to the pick-up truck.

“That’s all I have,” says Asma, about 50, pointing to her bag in the front seat of the van. “The day I left Syria I swore I wouldn’t be back until my Kurdish land was ruled by its own people.

“I fled my house across this very same stretch of land 32 years ago, literally giving the breast to my little daughter. She won’t be able to see her birthplace because she died two years ago, fighting against the Turkish army in the mountains.”

Rafik has been waiting for hours at a point further down the road to pick up his brother Jewan.

“The way back home is safe, you needn’t worry about anything,” he reassures Jewan. They greet one another with one kiss on the left cheek and three on the right one, the local custom.

There are no reliable figures yet on the number of Kurds returning to Syria. Some said they were returning for only a short while because of the new relative stability of this region where the Kurds now seem in charge.

There’s hardly any traffic on the road, occasionally lit by fire columns alongside. “Many of these lands were ours but the Assads – Syria’s ruling family – gave them to Arab families from the south of the country,” says Jewan. “This area is also rich in gold.”

The coming of the Ba’ath party to power in 1963 led to an Arabisation policy that worked against the Kurds in Syria, the country’s second biggest ethnic group.

Kurdish language was prohibited, and many Kurds were even denied Syrian citizenship. Some Kurds were deported, and Arab settlements established in Kurdish areas.

Today the Kurdish colours – green, red and yellow – are sprayed over walls and murals. The Kurdish flag flies at the entrance of Girke Lege, 35 kilometres from the Iraqi border and 15 km from the Turkish one, suggesting that the situation has changed substantially in the past months.

“The area is fully under our control,” claims one of the fighters manning the checkpoint at the eastern entrance of Girke Lege.

Democratic Union Party (PYD) president Saleh Muslim told IPS from an undisclosed location that Syrian Kurds have not negotiated any truce with the Bashar al-Assad government. “We’re Syria’s second ethnic group and Damascus simply doesn’t want another front with the minorities in his territory.”

Many believe that the Syrian regime is using the threat of a self-ruled Syrian Kurdish region to widen the conflict with Turkey.

Girke Lege is very unlike the images of destruction in Damascus. Kurdish music plays out loud from shops and teahouses. The brand new headquarters of one of the Kurdish political parties working underground for decades, are open well after midnight. Against all odds, Kurds have seemingly found new freedom in the current scenario.

“I had heard about all this but I still cannot believe what I’m seeing,” says a jubilant Jewan after he buys something with Syrian currency for the first time in three years – a kilo of pastry for his family.

His mother can barely contain the tears when she hugs her son again. His arrival has doubtless taken her by surprise, but neither was Jewan expecting to meet his relatives from Damascus.

“We arrived here a few days ago. Our district was being heavily pounded from both sides so we couldn’t stay there any longer,” says Marai, his uncle.

“Twenty years ago we moved from here to Damascus in search of a better life,” adds Alian, Jewan’s aunt. “Today it’s us who do not know when we will go back.”