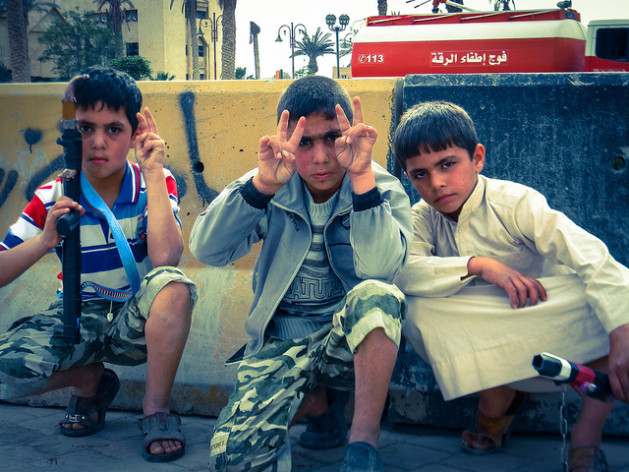 WASHINGTON, May 4 2013 (IPS) - Despite renewed pressure by hawks in Congress and the media, U.S. President Barack Obama appears determined to avoid sharply escalating U.S. involvement in the ongoing civil war in Syria.

While administration officials insist that all options for responding to the recent alleged use by the Syrian military of chemical weapons against anti-government strongholds remain on the table, insiders suggest that the likeliest choice will be, at most, to begin supplying selected groups of rebels with “lethal” defensive weapons, albeit nothing like the surface-to-air missiles and anti-tank rockets they have been calling for.

“They’re worried about more-sophisticated weaponry falling into the wrong hands,” said one well-connected Congressional staffer here this week, noting that reports that Islamist groups – at least one of which, the Al-Nusra Front, has declared fidelity to Al-Qaeda – now dominate the overwhelmingly Sunni insurgency.

So far, Washington has provided rebels with only “non-lethal” assistance, including communications gear and food rations. Just before the chemical-weapons charges surfaced, the administration  had decided to add body armour and night-vision goggles.

Throughout the conflict, it has turned a blind eye to supplies of “lethal” equipment from Saudi Arabia, Qatar, and Turkey, even as it became increasingly concerned that the recipients of that aid are almost uniformly Sunni Islamists.

While the public might rally behind stronger action – for example, creating a “no-fly zone” over all or parts of the country, as hawks like Republican Sens. John McCain and Lindsay Graham have repeatedly urged — the administration would have to mount a major “information” campaign to get that support, recent polls suggest.

Asked last week whether they would support the U.S. and its allies using force against Syrian forces if their use of chemical weapons is confirmed, a plurality of 45 percent of respondents in a Pew Research Center survey said they would, while 31 percent said they would oppose military action.

In a New York Times/CBS poll taken at the same time, however, 62 percent of respondents said they did not feel the U.S. “has a responsibility to do something about the fighting in Syria…,” while only 24 percent disagreed.

“Whether the military effect would produce the kind of outcome I think that not only members of Congress, but all of us would desire – which is an end to the violence, some kind of political reconciliation among the parties and a stable Syria …It’s not clear to me that it would produce that outcome,” Gen. Martin Dempsey, the chairman of the Joint Chiefs of Staff, told reporters earlier this week.

While he assured his audience that the Pentagon was constantly updating its contingency plans and could prevail – albeit not nearly as easily as in Libya – over Damascus’s Russian-built air-defence system to set up a no-fly zone, he also raised serious questions about the wisdom of such a strategy. Dempsey pointed out that Assad’s air force was responsible for only about 10 percent of rebel and civilian casualties.

“The other 90 percent are through direct fire or artillery. So the question then becomes: If you eliminate one capability of a potential adversary, will you be inclined to find yourself in a position to be asked to do more against the rest?” he asked.

Meanwhile, Pentagon sources, with the evident approval of their superiors, briefed the Wall Street Journal on just how formidable Syria’s air defences were, noting that Dempsey himself had told Obama it would be very difficult for U.S. aircraft to take out mobile and other systems that were installed after the Israeli attack on a suspected secret nuclear reactor in 2007.

Even many of McCain’s and Graham’s Republican colleagues have failed to rally behind their calls for direct military action, opting instead for arming “moderate”, secular rebel groups, which, according to a major New York Times account last month, scarcely exist in what has become a sectarian conflict similar in many respects to that which nearly tore Iraq apart in 2006-07.

Indeed, neo-conservatives and other Republican hawks have been so disappointed by the tepidness or indifference of their colleagues’ response to Syria’s alleged use of chemical weapons that they have added it to a growing list of charges of creeping “isolationism” in the party.

Of course, most of their fire has been directed at Obama, not only for failing to intervene in the conflict earlier, when “moderate” groups may have been more of a force within the insurgency, but also and, more importantly, for damaging U.S. “credibility” by, first, warning Assad that his use of chemical weapons would be a “game-changer” and cross a “red line” that would provoke “enormous consequences” from Washington, and then by arguing, as he did last week, that he needs more evidence and a broader international consensus that the government did indeed deploy such weapons before taking any action.

Even some more-dovish voices who have long been sceptical about any escalation in U.S. involvement in Syria have argued that Obama has put U.S. credibility on the line and must follow through on his threat, lest Iran and North Korea, for example, draw the wrong conclusions.

“If you draw a line in the sand, especially in the turbulent and passionate Arab world, and dare someone not to cross it, you had better back up the threat when he does,” wrote former Under Secretary of State for Policy Nicholas Burns on GlobalPost this week, although he also defended Obama’s desire to gain confirmation of the chemical-weapons reports.

Anne-Marie Slaughter, a liberal interventionist who served in a top policy post in Obama’s State Department, evoked the memory of Rwanda in appealing in a Washington Post op-ed for Obama to take action. “…(T)he White House must recognize that the game has already changed,” she wrote. “U.S. credibility is on the line.”

Still, other interventionists who had supported more-aggressive action by the U.S. early in the conflict now said they were now much more ambivalent, particularly in light of the reported dominance of more-radical Islamists among the rebel ranks.

“I lean now much more to caution,” said former Amb. Morton Abramowitz, who played a key role in persuading the Clinton White House to intervene in the Balkans in the 1990s and initially favoured a no-fly zone in Syria to protect the peaceful opposition.

That preference for caution – combined with the universal rejection of putting U.S. “boots on the ground” for anything but the most dire humanitarian emergencies (such as the indiscriminate use of chemical weapons against a civilian population or large stocks of chemical weapons falling into the hands of Hezbollah or Al-Qaeda-affiliated rebel groups) – will make it much easier for Obama to finesse his “red line” warning and avoid direct military intervention.