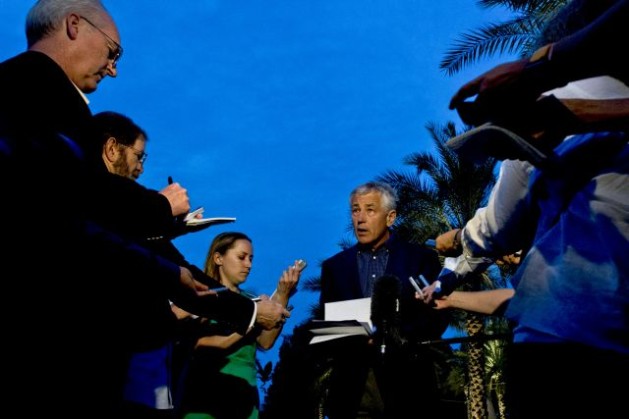 U.S. Defence Secretary Chuck Hagel briefs the press in Abu Dhabi in the United Arab Emirates, April 25, 2013. Hagel announced that the U.S. intelligence community assesses with varying degrees of confidence that the Syrian regime has used chemical weapons -- specifically the nerve-agent sarin -- on a small scale. Credit: DOD photo by Erin A. Kirk-Cuomo

“Our intelligence community does assess with varying degrees of confidence that the Syrian regime has used chemical weapons on a small scale in Syria, specifically the chemical agent sarin,” the letter said, a day after a letter by eight senators was sent to the president asking if chemical weapons had been used by the Assad regime since the conflict there began in 2011.

"This administration will likely remain well aware of the Colin Powell dictum: 'You break it; you own it'." -- Wayne White

Republican Senator John McCain, one of the co-signers of the letter to the White House, said Thursday that president Obama’s “red line” on Syria has been “crossed”.

“Not only have our intelligence people concluded that, but as importantly the Israeli, the British and the French have as well,” McCain said on Fox News.

“The president clearly stated that it was a red line and that it couldn’t be crossed without the United States taking vigorous action,” he said.
But it’s not clear whether the president’s red line has been crossed.

The White House is also seeking confirmation of the U.S. intelligence community’s assessment before taking action.

“…Precisely because the president takes this issue so seriously, we have an obligation to fully investigate any and all evidence of chemical weapons use within Syria,” the White House letter said before calling for a U.N. investigation to “credibly evaluate the evidence and establish what took place”.

“There was wiggle room [in the letter] about who might have been actually doing it,” Robert E. Hunter, who served on the National Security Council staff throughout the Jimmy Carter administration, told IPS.

“It’s not clear to me that the administration has figured out what’s in the best American interest after period X…because we’ve been ambivalent about that or because in the president’s statement it says Assad ought to go, then if that’s where you are, what are you prepared to do to see it come about, and if it does come about, then what are you prepared to do?” said Hunter.

“You can arm the rebels, you can have a no-fly zone, you can use air power…we now have a capacity to use air power at relatively low risk. But that still begs the question: then what happens? How do you protect the minority if Assad goes? How do you keep this from becoming a spill-over into what I call a slow-rolling civil war throughout this part of the Middle East,” he said.

“It does not appear that the proverbial Obama administration ‘red line’ has been crossed – yet – because there clearly are some differences about the level of certainty within the U.S. intelligence community over whether regime lethal chemical weapons (CW) use has taken place,” Wayne White, a former deputy director of the State Department’s Middle East/South Asia Intelligence Office (INR/NESA), told IPS.

“Also at issue is whether, if this has occurred, the incident was significant or relatively isolated and minor, as well as whether the level of danger that any such use would be repeated,” said White, now a scholar at the Middle East Institute.

There is meanwhile differing opinion among U.S. Mideast policy experts about whether Washngton should militarily intervene in Syria, something which the Obama administration has so far resisted.

“It doesn’t really matter which intelligence assessment – Israeli or American – is accurate, this is no longer an academic question. The U.S. and its allies, in or outside the U.N., must act swiftly to bring down the regime and prevent any further use of chemical weapons by the regime,” Emile Nakhleh, a an expert on Middle Eastern society and politics who served in the Central Intelligence Agency from 1993-2006, told IPS.

“It is time the Obama administration acts on its own to speed up Assad’s fall. If the president had followed his earlier statement that Assad should go, the Syrian people would have been spared the horrible destruction that the regime has inflicted on the country, the deaths of almost 100,000 people, and the flight of almost three million Syrians as refugees to neighbouring countries.

“More importantly, such action would have removed the possibility of the regime using weapons of mass destruction against the Syrian people,” Nakhleh, who formerly headed the CIA’s Political Islam Strategic Analysis Programme, told IPS.

The White House’s letter release Thursday coincided with a library dedication ceremony for President George W. Bush, which was attended by all living U.S. presidents including Obama.

Bush spoke highly of his two-term presidency, which included U.S.-waged wars in Iraq and Afghanistan.

“…We liberated nations from dictatorship and freed people from AIDS. And when our freedom came under attack, we made the tough decisions required to keep the American people safe,” said Bush at the library dedication ceremony on the campus of SMU in Dallas, Texas.

But successive polls show little support now by U.S. citizens for involvement in another Mideast war.

In December 2013, a Pew Research poll showed that 65 percent of respondents opposed the U.S. and its allies even sending arms and military supplies to anti-government groups in Syria.

“The Obama administration, already heavily committed in Afghanistan, addressing significant military-related budget cuts, and well aware of the need to avoid an Iraq-like scenario, will move with much greater caution in dealing with Syria than did the Bush administration (which eagerly sought an all-out war with Iraq) back in 2003,” White told IPS.

“Particularly with Islamic extremists (in fact, many directly affiliated with Al-Qaeda) important players in the complex situation on the ground in Syria, this administration will likely remain well aware of the Colin Powell dictum: ‘You break it; you own it’,” said White.

“Syria already is, in effect, broken, but the U.S. so far has played only a marginal role in determining the flow of events there. Indeed, so far, this remains very much a Syrian conflict, despite the involvement of various outside governments (including Iran),” he said.