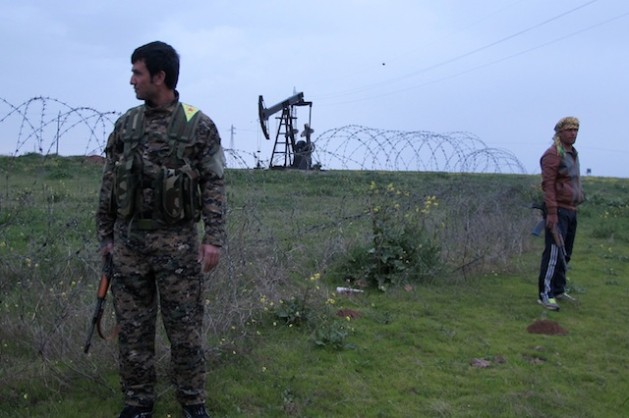 DERIK, Syria, Apr 11 2013 (IPS) - At seven o’clock in the morning on Mar. 1, Kurdish militias took over the only operational oil refinery in Syria, located about 800 kilometres northwest of Damascus.

“They told us to go home, and to wait for two days until everything was settled,” recalled Mahmud Hassan, one of 3,000 workers at the Rumelan refinery.

According to Abu Muhamad, an engineer at the production department, the plant consists of over 1,350 “Canadian-type extractors spread over an area of ​​about 3,000 square kilometres.

“Before the revolution we would easily produce 165,000 oil barrels a day but today we are pumping around 50,000,” he told IPS, adding that the Kurdish militias are “protecting the wells” and are tasked with distributing salaries to the workers.

The oil plant has become a symbol of Syria’s fractured oil industry, which has gradually ground to a halt since the uprising against President Bashar al-Assad’s regime broke out in 2011.

Locals sources say it may also have brought the different armed groups closer together in order to negotiate how the last remaining local oil supply will be managed.

Before the revolt, the country’s many oil fields yielded 300,000 barrels a day. In 2010, oil exports touched the three-billion-dollar mark.

Now, the government is importing the very resource that was once the axis of its entire economy in order to meet local demand.

Though oil from Rumelan continues to flow to Homs and Banyas, located 160 and 280 kilometres north of Damascus respectively, “international sanctions (against Assad’s regime), and constant sabotage by the Free Syrian Army (FSA) or people who want to sell the oil by themselves, have cut the supply drastically since the revolution”, said Hassan, who worked for over two decades at the state-owned Syrian Petroleum Company that owns the Rumelan refinery.

He fears that if various armed groups continue to spar over control of the refinery, it could be catastrophic for the country.

While Assad’s government concentrates its efforts on crushing the rebellion raging through Syria, most of the northeastern region of the country has been under de facto Kurdish rule since July 2012.

Many have suggested that the Democratic Union Party (PYD), the dominant political party representing Syrian Kurds, negotiated a truce with Assad’s government in exchange for greater control over the country’s Kurdish-majority regions.

PYD Chairman Salah Muslim told IPS that no such agreement had taken place.

But there is no doubt that the party and its militias enjoy widespread influence and control, with or without the government’s blessing.

Commander Feirusha, head of one of the Popular Protection Committees (known by the Kurdish acronym YPG), told IPS, “We have more than 30,000 troops deployed throughout all the Kurdish regions in Syria. We never (use) violence unless it is absolutely necessary,” he added proudly, driving his pickup truck across the flat landscape dotted with bouncing oil pumpers and fire columns.

“We respect the FSA units but we hate the Salafists,” continued 30-year-old Feirusha, who has 300 militiamen under his command.

He assured IPS that the Rumelan refinery takeover was conducted in a “peaceful way, through dialogue and without any shooting”, a testimony supported by footage taken on the spot by Abbas Khabat, a local journalist at Hawar News Agency.

But this claim has not stopped the government from lashing out at the local workers, whose wages have been withheld since March.

Most of the refinery’s 3,000 workers live with their families in a residential compound not far from the refinery, in a cluster of concrete blocks surrounded by scrub, the flat roofs lined with water-collection tanks.

Every day that they don’t receive their wages, concern grows among the staff.

“We keep working in the same way, our routines have not changed at all,” explains electrician Hafez al Nuseibi. This veteran refinery operator fears that Damascus may have interrupted salaries in retaliation for the recent takeover at the plant.

But in this tense atmosphere, fear quickly gives way to anger. “If we don’t get paid in the forthcoming days we’ll go on strike and paralyse the whole country,” Nuseibi warned.

Other workers are convinced that the different political groups are in cahoots with one another, and the delay in salaries is a result of secret negotiations that might not yet have reached a conclusion.

“A week after the YPG took over the plant, two secret meetings were held between the Kurds, the FSA and government representatives,” said Firat Dicle (not his real name), who has worked at the Rumelan refinery for over 25 years.

“The guests were hosted at the refinery’s administration building and their main point of discussion was how to split the profits from Rumelan into three parts,” he told IPS.

“Eventually they agreed that both the FSA and the YPG-PYD would get 30 percent, whereas 40 percent of the revenue would go to Damascus. While the three parties are fighting on the ground it’s clear they all badly need to keep fuel flowing,” says the veteran oil worker.

The situation is compounded by the fact that “everybody is afraid of both the regime and the FSA.”

Clashes between the FSA and the YPG reached their peak during the three-month battle of Serekaniye, 500 kilometres northeast of Damascus, until both sides declared a ceasefire in February.

Abu Muhamad, who combines his technical position with the political post of PYD head delegate in Rumelan, stressed, “Rumelan belongs not only to the Kurds but also to the Arabs, the Christians and the Syrian people as a whole.”

The senior representative disputes allegations that the Kurdish party entered into deals with the FSA or the government to share oil revenues, insisting, “Neither the PYD nor the YPG get any economic benefit whatsoever.

“Our main goal is that the plant continues to operate for the common good – a disruption of the supply will only be fatal for us. We would be paralysed while Damascus would still receive fuel from Iran, Russia and China.”