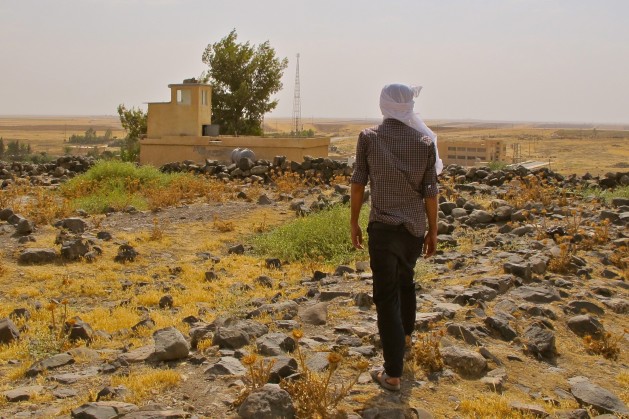 A man walks by the police checkpoint in Gundik Shalal in northeast Syria. Credit: Karlos Zurutuza/IPS.

GUNDIK SHALAL, Syria, Aug 31 2012 (IPS) - “Of course I want to defect but I cannot give up my salary. How could I possibly feed my 11 children?” The war is putting every Syrian on the brink, including this policeman on the side of President Bashar Al Assad.

We meet at a private home in the Kurdish border village Gundik Shalal, 750 kilometres northeast of Damascus. The barracks where Furat Azir (that’s how the policeman wants to be identified) has spent the last two years is less than a kilometre away.

“We were 13, but eight of my colleagues left 20 days ago. Some joined the Free Syrian Army (the main Syrian opposition armed group) and crossed to Iraqi Kurdistan. Those of us still in our post are from Deir ez Zor and Aleppo (430 and 355 kilometres respectively from Damascus),” the policeman tells IPS between sips of sweet Turkish tea and Lebanese pastry.

After a series of protests led by various Kurdish movements last July, several Kurdish villages in the northeast of the country are enjoying an unexpected calm. The Syrian government still keeps troops in the area but they are reportedly folded inside their buildings and barracks. Furat’s testimony corroborates this picture.

“We don’t go on patrol any more. We spend the days without leaving the barracks, following the news on TV. We have not fired a single bullet since the beginning of the revolution.”

Some have suggested that the Democratic Unionist Party (PYD), the dominant political party among the Kurds of Syria, may have negotiated truce with Bashar Al Assad’s government. Party chairman Salah Muslim has denied to IPS that there has been any agreement.

Many within Syria also suggest that Damascus has abandoned this region in an attempt to distance Kurds from the Free Syrian Army forces.

Furat says he has “no problem whatsoever with the PYD.” But he can hardly hide his anxiety.

“I tried to flee to Turkey but the Syrian army captured me and I was detained for ten days. Today it would be impossible to get back home due the myriad of checkpoints manned by both rebels and the government.

“Many comrades say they will wait at their positions and put down their weapons when the FSA arrives, but nobody knows what will happen when the rebels reach this area. I doubt I’ll get my salary this month, so I’ll try to cross to Turkey or Iraq at the first opportunity.”

“I was based at the Qatana barracks 20 kilometres southwest of Damascus,” says the Kurdish ex-cop who reached his hometown two weeks ago. “I was caught by the war. I was made a recruit for an extra eight months, even though I had already spent the set 15 months as recruit.”

It was far from easy, he says. “Inside the barracks it’s almost impossible to get to know what is going on outside. Both officers and state television – the only sources accessible in the barracks – constantly repeated that we were fighting Al Qaeda terrorists and Jihadists from all around the world.”

Mobile phones were banned, he says, but many manage to keep them, carefully hidden.

“I asked for a one-day permit to go to Damascus and my commander gave me three hours. My father was waiting to bring me back home. I crossed the checkpoints with my cousin’s identity card because the army keeps all our identification documents.” He is grateful for his resemblance to his cousin.

Salah, 24, is due to join the Syrian military within three months. But on hearing accounts like Dilhar’s, he is determined to flee the country before then.

“I will try to go to Europe but I know it’s hard. A relative of mine spent a fortune to get there and he got stuck in Ethiopia.” He considers the United Arab Emirates his Option B.

The Kurdish Regional Government admitted in July to have hosted and trained 650 Syrian Kurds who had defected from the Syrian army. It’s not certain whether they will join the FSA on return to Syria, or fight Al Assad’s troops on their own.

The Kurdish gesture bothers the Syrian government, but also Turkey, which fears the increasing control Syrian Kurds are achieving in their territory. Turkey is home to about 20 million Kurds. Many have been seeking an independent homeland in Turkey.

However, traffic across such porous borders can hardly be monitored. After defecting from the army a few months after the uprising, former conscript Massoud crossed Syria’s northeastern border with Iraq to reach Erbil, administrative capital of the Kurdish Autonomous Region of Iraq, 300 kilometres north of Baghdad.

“Upon arrival I applied for access to the Peshmerga (Iraqi Kurdistan Region’s armed forces). I passed the training course and, for the last three months, I have had a salary of 250 dollars,” Massoud says, in his brand new camouflage uniform.

“I miss my family back in Syria but I want to start a new life on this side of the border.”