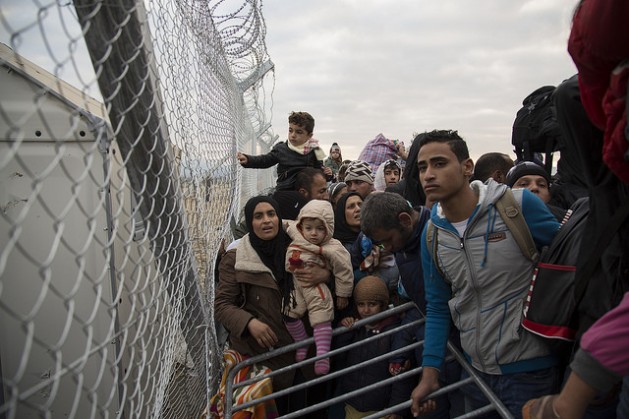 ATHENS, Jun 9 2016 (IPS) - Closure of the Western Balkans route has trapped tens of thousands of refugees heading to Central and Northern Europe in Greece, including many unaccompanied minors who either escaped from war zones after having lost their relatives, or were sent ahead in hopes of helping their families follow afterwards.

While the Western Balkans corridor remained open, many minors opted to declare they were adults or register as relatives of other refugees transiting the country to avoid being put in protective custody and reception facilities.

According to a May 31 report by Save the Children, more than 1.2 million refugees have headed to Europe since 2015 – the continent’s “biggest wave of mass migration since the aftermath of the second world war.” They come mainly from conflict-torn countries like Syria, Sudan, Afghanistan, Somalia and Eritrea.

The problem has worsened since the beginning of February, when European countries limited the number and profile of those let through. The formal closure of the route a month afterwards boosted the number of refugees stranded in Greece to 57,000, according to UNHCR. The U.N. refugee agency estimates more than 30 percent of them are minors.

Kiki Petrakou, a social worker with the National Center for Social Solidarity, a state agency involved with the system of transferring minors to specialized accommodation centers around the country, says the number of requests for hosting unaccompanied children rose sharply in the first three months of this year.

“The numbers we are called to manage have multiplied. From January to March 2016, we have had 1,210 requests while during the same period last year they were only 328,” Petrakou told IPS.

Up to the end of May, there have been 1,875 cases, 1,768 boys and 107 girls. “It is likely the numbers will keep increasing while authorities and organisations identify more of these kids throughout the reception camps,” said Petrakou.

So far 1,269 children have been sent to reception centers and another 629 requests are pending. But with inadequate facilities, some children must be placed temporarily in protective custody in police stations or reside in reception facilities for refugees in the Greek islands where conditions are tough and sometimes even hazardous.

Kostantinos Kolovos, a social worker involved with the management of a hosting facility operated by the NGO Praksis in the middle of Athens, says there have been a few isolated cases of children mistreated by authorities.

The center he works at currently hosts 28 minors of various ages and ethnic backgrounds. According to Kolovos, a crucial factor in whether a child receives adequate protection or falls through the cracks of the existing system is access to accurate information.

“Children are misinformed by smugglers who have their own interest in perpetuating the vicious circle of exploitation or ignore basic information regarding protection and rights available to them,” he says.

Consequently, many times they attempt to avoid being sent to official facilities or run away after a few weeks and try to survive on the streets.

"We pass information to kids about where to seek basic services and food so they don't resort to doing something bad for just 10 euros." -- Kostantinos Kolovos of the NGO Praksis

“We also do street work programmes so we can pass information to kids about where to seek basic services and food so they don’t resort to doing something bad for just 10 euros,” Kolovos says.

Abuse and harassment is not uncommon for minors who have completely fallen out of the protection network and are on the streets. Even those hosted in various emergency reception camps set up by the government around the country are not entirely safe.

Katerina Kitidi, a spokesperson for the U.N. High Commissioner for Refugees in Athens, told IPS, “UNHCR is deeply concerned by media reports about survival sex, including sexual exploitation of minors, in sites accommodating refugee populations. The authorities should proceed to an immediate and thorough investigation whenever such reports occur.”

According to UNHCR, safeguarding the security of the sites and their inhabitants should be a key priority in all areas, both in the mainland and the islands.

“The danger of survival sex and other types of sexual and gender-based violence (SGBV) is closely linked to the living conditions in areas accommodating refugees. Many sites were not set up to prevent or respond to such risks. For this to be achieved, one clearly needs well-lit and gender segregated WASH (water-sanitation-health) facilities and sleeping areas, as well as private facilities for women and children. In addition, one needs skilled personnel in SGBV monitoring and response, more female translators and investment in the provision of psychosocial aid” Kitidi told IPS.

But so far most of this kind of support to vulnerable populations and unaccompanied minors remains scarce or simply entirely unavailable throughout the reception camps.

A report published last week by the German organisation Pro Asyl regarding detection and protection of vulnerable populations in refugee camps around the Attica region includes interviews with many unaccompanied minors.

The majority of them, the report ‘Vulnerable Lives on Hold’ found, were not followed up with by authorities after being sent to the camps, had no accurate information regarding their own case, and had limited or nonexistent access to protection or asylum services.

“A very high percentage of them is estimated to be admissible for family reunification or relocation,” Pro Asyl noted.

But many, especially those in the islands, might have to wait a long time before having their cases processed while the asylum system struggles to cope with priorities set by the EU-Turkey statement. Under this agreement and according to the EU Asylum Directive, Syrian and other nationals who crossed the Aegean after Mar. 20 could be returned to Turkey on the basis that Turkey is considered a safe third country for them.

Petrakou says the acute need to increase the capacity of the unaccompanied minors’ reception system is not being met. Some new locations  have been created in various Greek cities over the last few months and have been immediately integrated into the reception system. But the 584 referral positions available are too few in light of the rapidly growing size of the problem, and meanwhile the threat of exploitation and abuse for unaccompanied minors is as big as ever.

Child trafficking trends in the context of migration and asylum analysed in a European Commission progress report last month show strong evidence that the ongoing refugee crisis “has been exploited by criminal networks involved in trafficking in human beings to target the most vulnerable, in particular women and children”.