ATHENS, Sep 6 2014 (IPS) - ‘Mare Nostrum’ – the largest search and rescue immigration operation ever carried out in the Mediterranean Sea – has become an issue of bitter brinkmanship between human rights groups and anti-immigrant lobbies.

At a higher political level, it has produced a tough negotiation between Italy and Europe, with the former asking for a European solution to immigration control in the Mediterranean. 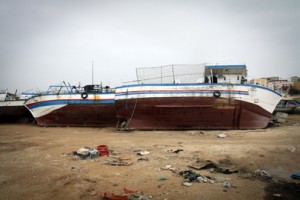 ‘Mare Nostrum’ was launched in October 2013 by Italy in the wake of a shipwreck south of the island of Lampedusa – the southernmost part of Italy lying 176 km off the coast of Sicily – that took the lives of 368 immigrants, mostly refugees from Syria and African countries.

The search and rescue operation is a military naval operation supported by the Italian Air Force and Coast Guard as well as civilian volunteers and medical personnel. It has operated in a vast area of the Central Mediterranean.

Between October 2013 and August 2014, ‘Mare Nostrum’ rescued over 115,000 people, mostly refugees, and transferred them to Italian territory. About 2,000 people are estimated to have lost their lives in the Mediterranean during the same period.

Human rights activists have praised the operation for rescuing refugees while its opponents have blamed it for producing a pull factor for immigrants and providing an illicit shuttle to Europe for them, making the job of traffickers easier.

One of the main roles of Frontex – the European Union agency for external border security that started operations in May 2005 – is to protect Europe’s external borders from illegal immigration and people trafficking.

Announcing the new operation, which has temporarily been named ‘Frontex Plus’, Commissioner Malmstrom called on European member states to translate “oral solidarity into concrete action” by contributing resources and means.

Ska Keller, Green Member of the European Parliament  told IPS that the new operation is “the result of pressure extorted by Italy on Brussels, but not what Italy has been asking for. It’s true Italy is rescuing a lot of people but this is not their main concern, they will not necessarily be happy to continue with Mare Nostrum.”

Silvia Canciani, press officer of the Association for Juridical Studies on Immigration (ASGI), told IPS that her association is “extremely concerned” because the only certainty about the new operation “is that ships will patrol only in European waters, 12 miles from the coast”, meaning they will no longer venture into international waters, like ‘Mare Nostrum’, which operated 170 miles from the Italian coast.

She added that it is still unknown whether Italian authorities plan to postpone, amend or carry on with ‘Mare Nostrum’ as it is, but a withdrawal from the operation might have a direct consequence on lives being lost in the Mediterranean.

Other critical voices stress how conservatives in the European Union see an opportunity in the negotiations that will follow on the new operation to capitalise on the issue of returning incoming migrants to safe third countries or to their countries of embarkation.

In a blog commenting on the announcement of ‘Frontex Plus’, Italian law professor Fulvio Vassalo Paleologo, a well-known commentator on immigration issues in the region, observed that in their joint announcement “the word ‘rescue’ has disappeared from Alfano’s and Malmstom’s vocabulary.” He also noted that neither of them had made a single remark about the conditions immigrants face in transit countries.

Both could be indications that the European Commission is seriously considering pushing for the control of population influxes outside European borders.

One day before the Malmstrom-Alfano announcement, the Italian edition of Huffington Post published an article citing an anonymous source in the Italian Ministry of the Interior, who was present at negotiations for the new operations in Brussels, as saying that “many people in Brussels see Mare Nostrum as an informal ferry for migrants.”

The unprecedented flows Europe is going to face given the geopolitical crisis in the Middle East will enforce a change of policy, which will translate into trying to “manage the flows of refugees and migrants in transit countries before they are on board for Italy,” the source said.

For this, he continued “we must work to re-negotiate readmission agreements with countries like Tunisia, Egypt and Morocco” and then stop incoming immigrants on board and not let them proceed to Italy “unless they have already started the procedures for refugee status and we have already made identifications before they are on board.”

The policy scenario in the Huffington Post article was vividly mirrored in an Italian Interior Ministry’s press release two days later, after a meeting between Minister Alfano and his French counterpart Bernard Cazeneuve to discuss “illegal immigration in the Central Mediterranean”.

Notably the meeting took place only one day after the announcement of ‘Frontex Plus’ in which France is expected to be one of the most active partners.

In the ministry’s press release, the term ‘rescue’ is again absent and the definition of the aim of ‘Frontex Plus’ is to “ensure control and surveillance of the external sea borders of the European Union … according to the rules of Frontex.”

From the press release, it also appears that both the Italian and French ministers believe that the issue of immigration should increasingly be dealt with “as a foreign policy issue” with “more emphasis to be given to the role of the Union for Foreign Affairs and Security Policy”, meaning the European External Action Service (EEAS) which implements the European Union’s Common Foreign and Security Policy.

The two ministers also identified two key policy objectives to push for within the European Union: “the commitment of all Member States of the European Union to a strict application of the rules for the identification of illegal migrants provided by European legislation and the strengthening of cooperation with countries of origin and transit in the field of border surveillance, police cooperation and development aid to these countries.”

Frontex’s key role in a new operation could facilitate these objectives given that the regulation “establishing rules for the surveillance of the external sea borders in the context of operational cooperation coordinated by the European Agency for the Management of Operation Cooperation at the External Borders of the Member States of the EU (Frontex)” adopted on April 30, 2014, includes provisions for the interception of incoming vessels in international waters and their return to third countries.

Many pro-immigrant organisations such as Frontexit (a campaign led by associations, researchers and individuals from both North and South of the Mediterranean on the initiative of the Migreurop network), the Belgian Coordination Initiative for Refugees and Foreigners (CIRE), as well as the U.N. High Commissioner for Refugees, the European Council on Refugees and Exiles, Amnesty International and the International Commission of Jurists, have indicated highly controversial legal gaps in the regulation that could compromise the rights of persons in need of international protection.

In a joint briefing, the latter said that despite some positive aspects, other aspects fail to meet the requirements of international law, including refugee law, human rights law, the law of the sea and E.U. law.

When asked to comment on the nature of the ‘Frontex Plus’ operation, Malmstroms’s office said: “At the moment we do not have anything to add in addition to the statement made by the Commissioner last week. The Commission is working on the definition of the adequate operational area and the components of a larger joint operation which can be a useful complement to the Italian efforts.”

It is thus clear that ‘Frontex Plus’ will eventually only play a merely auxiliary role alongside Italy’s ‘Mare Nostrum’ operation, particularly so when the costs of the operation are taken into account.

‘Mare Nostrum’ costs Italy over 9 million euro each month, while the current entire 2014 budget for Frontex is 89 million euro, with only 55 of them allocated for operational activities.