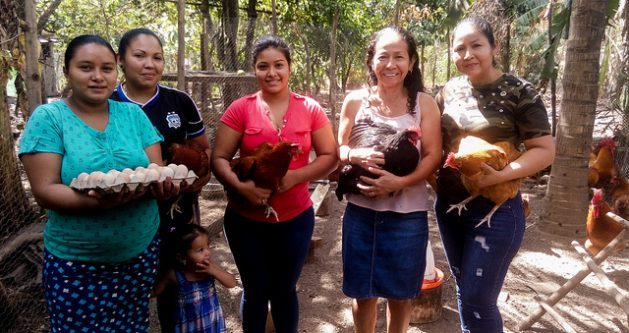 Poultry production is giving hope for deported migrants who make up the Association of Active Women Working Together for a Better Future, in the village of Los Talpetates, Berlin municipality in the eastern Salvadoran department of Usulután. Credit: Edgardo Ayala/IPS

BERLÍN, El Salvador, Feb 8 2019 (IPS) - Salvadoran farmer Lorena Mejía opens an incubator and monitors the temperature of the eggs, which will soon provide her with more birds and eggs as the chickens hatch and grow up.

Mejía is one of the beneficiaries of a project that seeks to offer productive ventures to women who, like her, have been deported from Mexico or the United States while they were attempting to achieve “the American dream.”

“I left because I worked in a factory in San Salvador, but the money wasn’t enough,” the 43-year-old woman told IPS in the yard of her home in the village of Talpetate, Berlin municipality in the eastern Salvadoran department of Usulután.

"Rural women are the motors of the economy, and at FAO we support returnees through inclusive and equitable processes." – Emilia González

In 1998, after a dangerous journey of several weeks, Mejia managed to settle in Dallas, Texas in the U.S.

She worked there in cleaning services at a school and in a hotel, but she returned to her country in 2001, with many broken dreams.

“Now I’m focused, together with my colleagues, on making this project grow,” she said.

Mejía and other local women farmers founded the Association of Active Women Working Together for a Better Future in 2010, and came up with an initiative that would offer productive opportunities to other returning migrants.

Currently, some 40 women make up this organisation, 15 of whom are involved in poultry production, who have received technical support from the state-run National Centre for Agricultural and Forestry Technology (Centa), as well as from the United Nations Food and Agriculture Organisation (FAO) office in El Salvador.

In spite of the importance of the support from Centa and FAO for the women’s organisation, the Salvadoran State has not yet developed a strategy aimed at the economic reinsertion of returning migrants, and in particular women.

“Sometimes what you need is a little boost,” said Mejia.

In the small rural village of Talpetate, home to some 70 families, jobs are scarce and poverty is rampant.

According to official figures published in May 2018, 32.1 percent of rural Salvadoran households are below the poverty line, compared to 27.4 percent in the cities.

The project, which was launched in November 2018, provided each participating family with 25 hens to produce eggs. 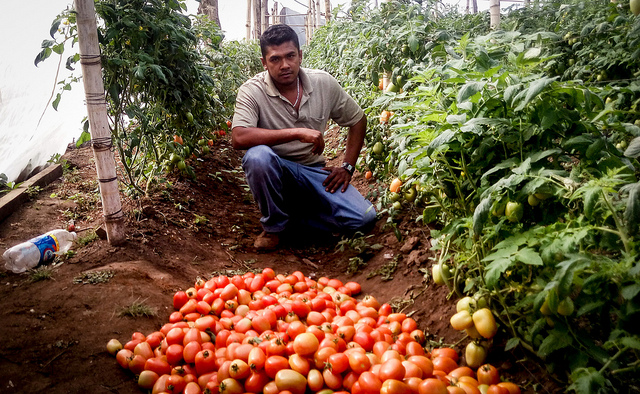 Dennis Alejo, a Salvadoran deported while trying to cross into the United States, has found in tomato production the best way to make a living and generate a handful of jobs in his native Berlin, in the eastern Salvadoran department of Usulután. Credit: Edgardo Ayala/IPS

According to the participants, income from the sale of eggs is still modest. But in the future, when production has increased, they expect to earn about 200 dollars a month as a collective.

That money is reinvested in the small collective farm, in order to improve and increase production, with more incubators and infrastructure.

“Rural women are the motors of the economy, and at FAO we support returnees through inclusive and equitable processes,” Emilia González, the U.N. organisation’s assistant representative for programmes in El Salvador, told IPS.

An important component of the project is that it also supports food sustainability, because part of the egg and poultry production goes to household consumption.

“We saved the money we would use to buy a few pounds of chicken,” Marlene Mejía, 46, another of the beneficiaries, told IPS.

She also tried to reach the United States, in 2003, as an undocumented migrant. But she only managed to make it partly across Mexico, before she got stuck in a town whose name she never knew.

After several days of confinement with very little food in a house run by migrant traffickers, she decided to return to her country.

The migration of Salvadorans to the United States is a phenomenon that has marked this small Central American country of 7.3 million people.

It is estimated that at least 2.8 million Salvadorans live in the United States, part of an exodus that intensified in the 1980s, when El Salvador experienced a bloody civil war (1980-1992).

Three planes arrive weekly from the United States with deportees, as well as three buses from Mexico.

According to official statistics, more than 26,000 Salvadorans were deported in 2018, mainly from Mexico and the United States. A high figure, but 1.2 percent lower than the total for 2017, which was 26,837.

For the past four years, Marlene Mejía has also been making pupusas, the most popular dish in El Salvador: a corn tortilla filled with beans, cheese and pork rinds, among other ingredients.

“If you have a job here, why suffer over there?” she asked.

The Salvadoran government offers some support for the economic reinsertion of returnees, through the project called “El Salvador is your home”, launched in October 2017.

According to data from the Foreign Ministry, 147 people received seed money to start up a project for economic and psychosocial reintegration, while another pilot project for the productive insertion of Usulután is aimed at 208 people.

But these are derisory amounts in terms of the number of beneficiaries, given the magnitude of the deportations and the country’s economic problems, so that most returnees find no economic stability, and government assistance falls far short.

“Evidently it is insufficient; a bigger effort is needed to be able to offer options to people when they return to their hometowns,” Jaime Rivas, a migration researcher at Don Bosco University, told IPS.

Some returnees manage to set up ventures on their own, with little or no governmental or international support.

The last time, in 2015, he managed to reach the outskirts of San Antonio, Texas, but the group of migrants with whom he had been crossing the desert for seven days was intercepted by the “migra”, as migrants popularly call agents of the U.S. Immigration and Customs Enforcement.

But he managed to escape and hide in the bush.

“I spent the whole night hugging the scrub to hide from a helicopter with a searchlight, which was looking for me,” he told IPS.

Now, through his own efforts, and overcoming all sorts of obstacles, Alejo grows good quality tomatoes on a small plot of land he rents in Berlin, thanks to the 1,800 plants he planted three years ago.

He also employs a dozen young people as pickers, and feels he’s preventing youngsters from risking their lives crossing deserts to get to the United States.

“I don’t pay them much, just five dollars a day, but if I had more support, I could employ more people,” he said.

Because Alejo also faces the lack of financial support to set up an irrigation system to boost production.