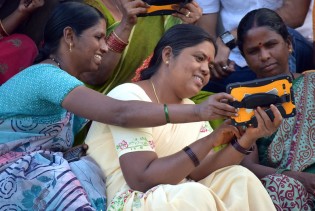 By José Graziano da Silva
Around the world, but especially in the planet’s poorest regions, women represent a life force that renews itself daily, sometimes against all odds.

By Amantha Perera
During the dry season, when dirt roads are cracked from the relentless heat, the sight of women walking miles, balancing pots of water on their heads, is common in rural Sri Lanka.

By Isaiah Esipisu
At Gakoromone Market in Meru, in Kenya’s Eastern Province, Ruth Muriuki arrives in a pickup full of tomatoes and cabbages despite the scarcity of rainfall in the area, thanks to the greenhouse technology she uses on her farm – and microcredit.

By Mariela Jara
This year’s unusually rainy season in Peru is having a negative effect on the wellbeing and health of women in rural areas who are forced, for example, to spend three times as much time walking to collect firewood and water. But the authorities continue to turn a blind eye to the problems they face.

By Mathilde Bagneres
Violence, torture and other forms of cruel treatment are on the rise for women in the highlands of Papua New Guinea.

By IPS Correspondents
Agriculture currently provides a livelihood for roughly 1.3 billion smallholder farmers and landless workers, of which nearly half – close to 560 million – are women.

By Estrella Gutiérrez
"Sometimes I think of giving it all up,” Aura Canache, a small farmer in Venezuela, told IPS. “My neighbours get loans and aid, but I never have. The farm assistance plans are for men, although there are many women living off the countryside too.”

By Thalif Deen
When the U.N. Commission on the Status of Women (CSW) held its inaugural meeting in London back in 1946, the U.S. delegate, Eleanor Roosevelt, read an open letter to "the women of the world" calling on governments to encourage women everywhere to participate in national and international affairs.

By Marcela Valente
"I had never worked before, and now I produce kilos and kilos of dried fruit to sell. They taught me how to dry peaches, tomatoes, peppers and grapes, and I decided on my own to try it with melons and pears - and they were spectacular," Susana Robledo, a proud new entrepreneur from rural Argentina, told IPS.
ADVERTISEMENT ADVERTISEMENT