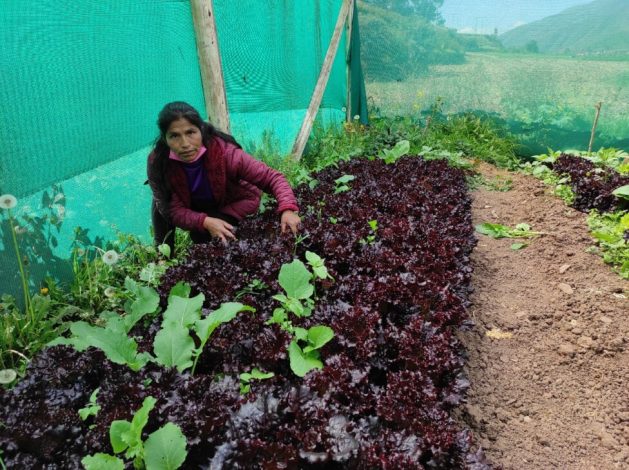 Lourdes Barreto squats in her greenhouse garden in the village of Huasao in the municipality of Oropesa, in the Andes highlands of the southern Peruvian department of Cuzco, proudly pointing to her purple lettuce, grown with natural fertilizers and agroecological techniques. CREDIT: Mariela Jara/IPS

CUZCO, Peru , Oct 13 2022 (IPS) - Lourdes Barreto, 47, says that as an agroecological small farmer she has improved her life and that of Mother Earth. “I love myself as I love Mother Earth and I have learned to value both of us,” she says in her field outside the village of Huasao, in the highlands of the southern Peruvian department of Cuzco.

On the occasion of the International Day of Rural Women, commemorated Oct. 15, which celebrates their key contribution to rural development, poverty eradication and food security, Barreto’s story highlights the difficulties that rural women face on a daily basis, and their ability to struggle to overcome them.

“I was orphaned when I was six years old and I was adopted by people who did not raise me as part of the family, they did not educate me and they only used me to take their cow out to graze,” she said during a visit by IPS to her village.

“At the age of 18 I became a mother and I had a bad life with my husband, he beat me, he was very jealous. He said that only he could work and he did not give me money for the household,” she said, standing in her greenhouse outside of Huasao, a village of some 200 families.

Barreto said that beginning to be trained in agroecological farming techniques four years ago, at the insistence of her sister, who gave her a piece of land, was a turning point that led to substantial changes in her life.

Of the nearly 700,000 women farmers in Peru, according to the last National Agricultural Census, from 2012, less than six percent have had access to training and technical assistance.

“I have learned to value and love myself as a person, to organize my family so I don’t have such a heavy workload. And another thing has been when I started to grow crops on the land, it gave me enough to eat from the farm to the pot, as they say, and to have some money of my own,” said the mother of three children aged 27, 21 and 19.

Something she values highly is having achieved “agroecological awareness,” as she describes her conviction that agricultural production must eradicate the use of chemical inputs because “the Pacha Mama, Mother Earth, is tired of us killing her microorganisms.”

“I prepare my bocashi (natural fertilizer) myself using manure from my cattle. And I also fumigate without chemicals,” she says proudly. “I make a mixture with ash, ‘rocoto’ chili peppers, five heads of garlic and five onions, plus a bit of laundry soap.”

“I used to grind it with the batán (a pre-Inca grinding stone) but now I put it all in the blender to save time, I fill the backpack with two liters and I go out to spray my crops naturally,” she says.

The COVID pandemic in 2020 and 2021 prompted many rural municipal governments to organize food markets, which became an opportunity for Barreto and other women farmers to sell their agroecological products. 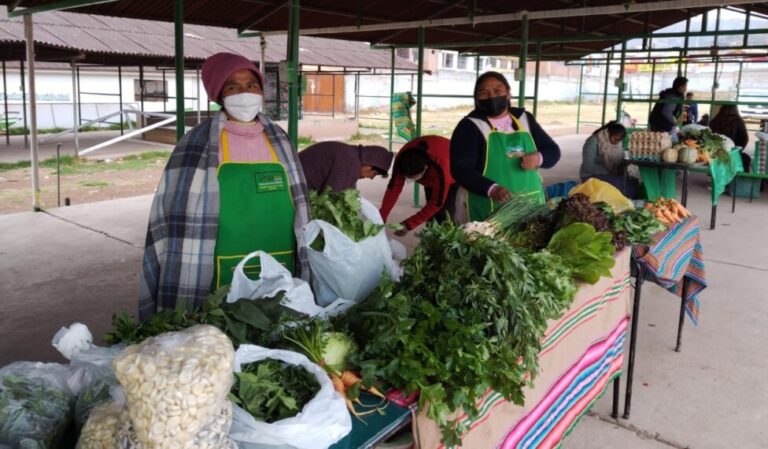 Lourdes Barreto (L) began to learn agroecological farming techniques four years ago, which improved her life in many aspects, including relationships in her family. At the Saturday open-air market in Huancaro, in the city of Cuzco, she wears the green apron that identifies her as a member of the Provincial Association of Agroecological Producers of Quispicanchi. CREDIT: Courtesy of Nadia Quispe

“I sold green beans, zucchini, three kinds of lettuce, broccoli, cauliflower, carrots, Chinese onions, coriander and parsley,” she says, pausing to take a breath and look around in case she forgot any of the vegetables she sells in the city of Cuzco, an hour and a half away from her village, and in Oropesa, the municipal seat.

Another less tangible benefit of her agroecological activity was the improvement in her relationship with her husband, she says, because she gained financial security with the sale of her crops, in which her children have supported her. Now her husband also helps her in the garden and the atmosphere in the home has improved.

Barreto, along with 40 other women farmers from six municipalities, is part of the Provincial Association of Ecological Producers of Quispicanchi, known by its acronym APPEQ – a productive and advocacy organization formed in 2012.

The six participating municipalities are Andahuaylillas, Cusipata, Huaro, Oropesa, Quiquijana and Urcos, all located in the Andes highlands in the department of Cuzco, between 3100 and 3500 meters above sea level, with a Quechua indigenous population that depends on family farming for a living. 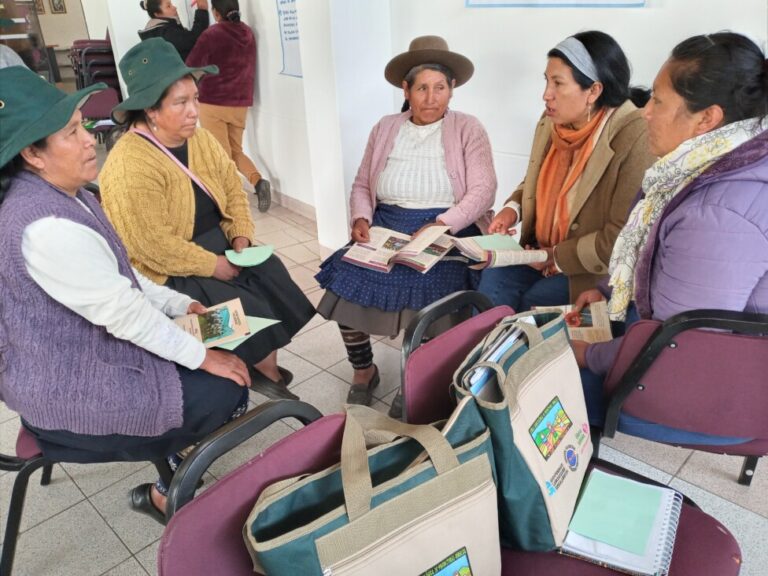 Training to strengthen the organization is part of the activities of the Provincial Association of Ecological Producers of Quispicanchi. Maribel Palomino (2nd-R, wearing a headband), the association’s president, talks with fellow members at a workshop held on Sept. 28, 2022. CREDIT: Mariela Jara/IPS

The president of APPEQ, Maribel Palomino, 41, is a farmer who lives in the village of Muñapata, part of Urcos, where she farms land given to her by her father. The mother of a nine-year-old son, Jared, her goal is for the organization and its products, which the rural women sell under the collective brand name Pacharuru (fruits of the earth, in Quechua), to be known throughout Cuzco.

“I recognize and am grateful for the training we received from the Flora Tristán institution to follow our own path as agroecological women farmers, which is very different from the one followed by our mothers and grandmothers,” she tells IPS during a training workshop given by the association she presides over in the city of Cuzco.

The Flora Tristan Peruvian Women’s Center disseminates ecological practices in agricultural production in combination with the empowerment of women in rural communities in remote and neglected areas of this South American country of 33 million people, where 18 percent of the population is rural according to the 2017 national census.

Now, Palomino adds, “we are part of a generation that is leading changes that are not only for the betterment of our children and families, but of ourselves as individuals and as women farmers.”

She is referring to the inequalities that even today, in the 21st century, limit the development of women in the Peruvian countryside.

“Without education, becoming mothers in their adolescence, without land in their own name but in their husband’s, without the opportunity to go out to learn and get training, it is very difficult to become a citizen with rights,” she says.

According to the National Agricultural Census, eight out of 10 women farmers work farms of less than three hectares and six out of 10 do not receive any income for their productive work. In addition, their total workload is greater than men’s, and they are underrepresented in decision-making spaces.

In addition, women in rural areas experience the highest levels of gender-based violence between the ages of 33 and 59, according to the National Observatory of Violence against Women. 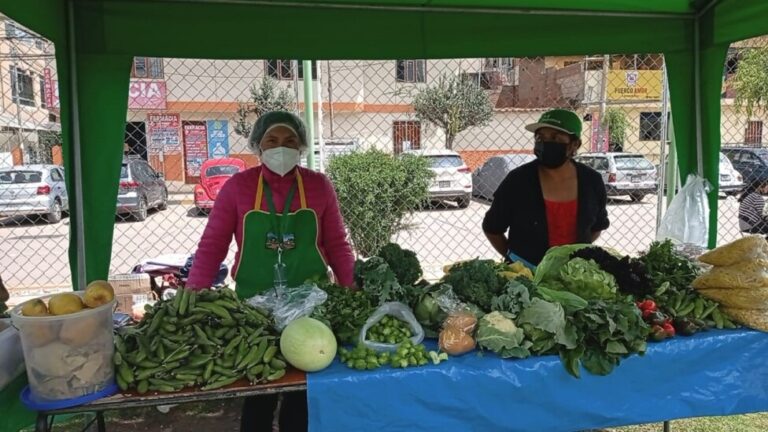 Maribel Palomino (L), president of the Provincial Association of Ecological Producers of Quispicanchi, sells chemical-free vegetables every week at the agroecological market in the neighborhood of Marcavalle in the city of Cuzco, Peru. CREDIT: Courtesy of Maribel Palomino

In this context of inequality and discrimination, Palomino represents a new kind of rural female leadership.

“I am a single mother, my son is nine years old and through my work I give him education, healthy food, a home with affection and care. And he sees in me a woman who is a fighter, proud to work in the fields, who defends her rights and those of her colleagues in APPEQ,” she says.

Palomino says it is crucial to contribute “to change the chip” of the elderly and of many young people who, if they could look out a window of opportunity, could improve their lives and their environment.

“With APPEQ we work to share what we learn, so that more women can look with joy to the future,” she said. 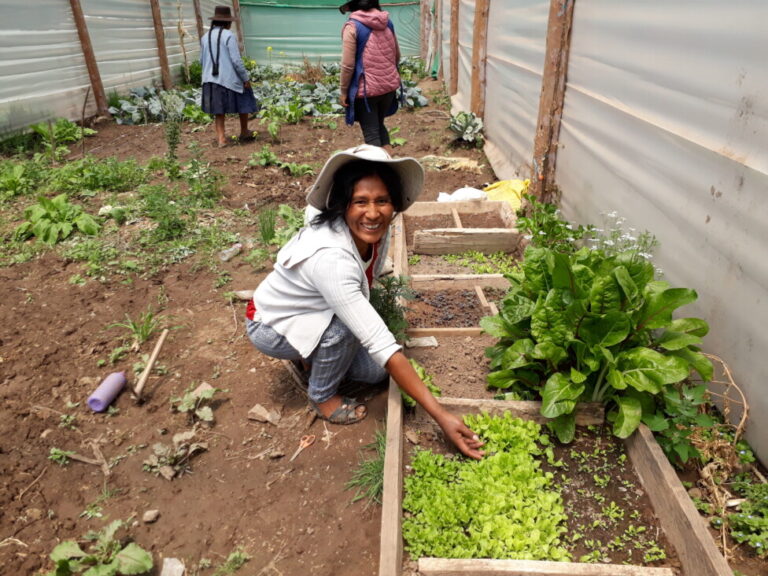 María Antonieta Tito, a farmer from the Andes highlands village of Secsencalla in the southern Peruvian department of Cuzco, shows her seedbeds of lettuce and celery plants. In March 2022 she began learning agroecological practices and is happy with the results that have allowed her to improve the quality of her family’s nutrition while generating her own income from the sale of vegetables at the local market. CREDIT: Mariela Jara/IPS

This is the case of María Antonieta Tito, 32, from the municipality of Andahuaylillas, who for the first time in her life as a farmer is engaged in agroecological practices and whom IPS visited in her vegetable garden in the village of Secsencalla, as part of a tour of several communities with peasant women who belong to the association.

“I am a student of the APPEQ leaders who teach us how to work the soil correctly, to till it up to forty centimeters so that it is soft, without stones or roots. They also teach us how to sow and plant our seeds,” she says proudly.

Pointing to her seedbeds, she adds: “Look, here I have lettuce, purple cabbage and celery, it still needs to sprout, it starts out small like this.”

Tito describes herself as a “new student” of agroecology. She started learning in March of this year but has made fast progress. Not only has she managed to harvest and eat her own vegetables, but every Wednesday she goes to the local market to sell her surplus.

“We have eaten lettuce, tomatoes, cucumber, and chard; everyone at my house likes the vegetables, I have prepared them in salads and in fritters, with eggs. I am helping to improve the nutrition of my family and also of the people who buy from me,” she says happily.

Every Tuesday evening she picks vegetables, carefully washes them, and at six o’clock the next morning she is at a stall in the open-air market in Andahuaylillas, the municipal capital, assisted by her teenage son.

“The customers are getting to know us, they say that the taste of my vegetables is different from the ones they buy at the other stalls. I have been selling for three months and they have already placed orders,” she adds.

But the road to the full exercise of rural women’s rights is very steep.

As Palomino, the president of APPEQ, says, “we have made important achievements, but there is still a long way to go before we can say that we are citizens with equal rights, and the main responsibility for this lies with the governments that have not yet made us a priority.”