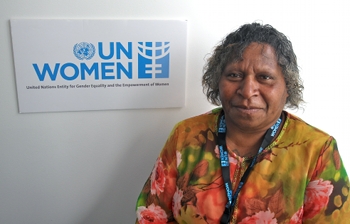 The highlands women of Papua New Guinea (PNG) experience the most frequent and severe forms of violence, according to two studies. The violence is linked to extreme cultural traditions that discriminate against women and girls, such as polygamy, forced marriages, sorcery, witch-hunting and extra-judicial killings. But at least one woman is fighting back in Papua New Guinea. Lilly Be’Soer, who was once a victim of tribal conflict and has been in a polygamous marriage, founded Voice for Change, a women’s rights non-governmental organisation (NGO).

In 2010, Be’Soer was awarded a Pacific Human Rights Defenders Award. Most recently, she has helped negotiate a peace agreement to resettle 500 internally displaced families.

IPS correspondent Mathilde Bagneres spoke with Be’Soer about her experiences, the situation of women in Papua New Guinea and the role of Voice for Change. Excerpts from the interview follow.

Q: What is the main purpose of Voice for Change? What is it achieving on the ground for Papua New Guinea’s women? My own experience made me understand that there are many women who are facing the problems that I faced. Many of them are displaced, resettled or survivors of violence in PNG. We set up this organisation, this network, to support women who are facing those problems.

Over the past four years, Voice for Change leaders have responded by forming an organisation that runs two main programs: Promoting and Protecting Women’s Human Rights and Economic Empowerment of Women.

Because of tribal conflicts, thousands of people are internally displaced in PNG. One of our main works is to try to mediate and intervene during confrontations, tribal conflicts and wars to come to a peaceful resolution.

We also work on women’s economic recovery. Women who have been internally displaced, the widows, survivors or victims of violence, need support, and need to be economically empowered.

Voice for Change is providing opportunity for those women to access cash from the organisation’s loans and credit project so that they can engage in income generating activities to support their family, send their children to school, pay for school fees or improve their house.

One of the most promising new ideas to is to unite women market vendors in a mass association, to give them voice in visioning, planning, budgeting and managing the markets, which are their mains site of income earning.

Q: How did you and Voice for Change facilitate mediation in tribal conflicts and wars in your country? Being a woman and a woman right defender is really challenging in the society I come from. I had to make a lot of sacrifices, in terms of money, for example. I have to be present in every social obligation; I have to be part of what the community is doing.

I have to do certain things to earn that recognition, so they can allow me and give me the space to be able to fill roles that are traditionally endorsed by men.

Women in conflict-affected highlands societies are in dire need of financial support to engage in economic activity to generate income to meet their family’s basic needs and to seek justice.

Since 2009, Voice for Change has been involved in assisting about 500 families who were displaced as a result of a tribal war. For years, women were internally displaced and they had no place to grow food and no way of supporting themselves and their families.

We have successfully, in the last six months, led the pre-mediation consultations and now we have come to peace reconciliation by both tribes.

Now we are working on resettling those women and their families back to their land, so they can start a normal life again.

Q: You are taking part in the CSW’s 56th session as a member of the panel about “Governance and institutions for the empowerment of rural women”. What concrete measures do you think Papua New Guinea’s government should take to empower women? Since independence in 1975, state legislative, administrative and judicial systems in the largely unexplored highlands region were still very weak, inadequate, neglected and under-resourced.

The government of Papua New Guinea hasn’t been really supporting the rural women. And in terms of gender-based violence, the fact that women are abused is an accepted norm.

A husband can hit his wife in the public place and nobody will support the woman. Women, as a result of polygamist relationships, are fighting against each other and are sometimes killing each other.

One of the bigger problems we also have is women who are tortured, killed, burned alive, because they are blamed for sorcery. And there’s nothing the government has done about it.

The government of Papua New Guinea has signed many international conventions, and treaties to promote the safety of women in the country but it’s not doing the job. It is not honouring its commitment to protect women. The government has neglected rural women.

The CSW has been on every year. This is my first time here, and it would be really interesting for me to know if the United Nations can make a government honour its commitment to support women on the ground.

In PNG, the government signed the declaration to end violence against women and all forms of discrimination against women. It also signed the Security Council’s resolution 1325 for women in armed conflicts.

Everything is signed, but the government is not making its commitment. The U.N. should ensure that governments honour their commitments. And meanwhile, 60 to 90 percent of women are currently victims of sexual or gender based violence in PNG.