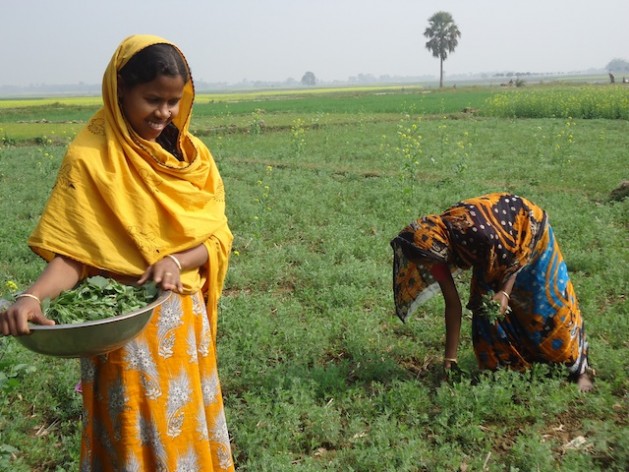 A vast majority of these women are living on a precipice, where small changes in their environment could result in chronic hunger and abject poverty.

Given the unprecedented scale of climate change, which has already caused massive food insecurity this year, rural women are not only extremely vulnerable, but also woefully overlooked by governments and policy makers who define top-down strategies for hunger and poverty eradication.

In response, the United Nations’ 56th session of the Commission on the Status of Women (CSW), scheduled to run from Feb. 27-March 9 at U.N. headquarters in New York, listed the empowerment of rural women as one of its priority themes for the year.

“If rural women had equal access to productive resources, agricultural yields could reduce the number of chronically hungry people by between 100 and 150 million,” according to a press release issued Thursday by UN Women.

This year’s CSW promises to examine the “empowerment of rural women and their role in poverty and hunger eradication, sustainable development and current challenges (and) will agree on urgent actions needed to make a real difference in the lives of millions of rural women.”

But while the U.N. is only just beginning its session on rural women, female farmers around the world are already deep in a struggle to secure their environment against the destablising impacts of climate change by using their traditional role as community leaders and ingenious farmers to sow the seeds of hope for their future.

Resisting drought at the local level

The boiled rice grains shimmer in the sunlight as the 34-year-old mother of three opens the bamboo fence of her small grain storehouse, saying, “This is the third time I got such a good harvest of rice despite the drought.” For several years now thousands of farmers in the region have abandoned agricultural land and production, especially cash crops like rice and wheat, in the face of unusually hot and arid weather, in the 7500-square-kilometre region.

Advised by agricultural experts on drought-resistant crops, Rini and her husband cultivated a new breed of rice known as BRRI-56, which is highly tolerant of extremely hot and dry conditions.

Unlike other local rice varieties, which require rain soon after planting, BRRI-56 grows without water for weeks. It also survives the Barind heat, which often reaches 50 degrees Celsius between July and November during the rice maturation period.

“We offer all sorts of support to farmers, especially to poor women who often need professional counseling and demonstration of the successes achieved by fellow farmers,” said Mujibor Rahman, a leader of a local farmers’ network known as the Integrated Pest Management (IPM) Club in Chapainawabganj district.

Thirty-two year Joynab Banu, a farmer from the Rajshahi district, told IPS, “There are climate related risks in cultivating crops in such extreme weathers. But since we have enough knowledge on climate adaptation we are ready to take any challenges.”

Agriculture provides about 36 per cent of the gross domestic product (GDP) of Bangladesh and employs roughly 60 per cent of the labour force. Rice covers about 75 percent of the country’s cultivable land, mostly in the Northwestern front.

With growing awareness of climate-resilient capacity, increased numbers of women, especially landless peasants, widows, divorcees and others facing social isolation in the Northwest, are now using abandoned agricultural land to contribute to crop production and secure the country’s food security.

Women lead the way to “organic”

Anantpur, a region in India’s Southern state of Andhra Pradesh is arid, treeless and made up of poor red soil, with low annual average rainfall of 553 millimetres, making it the second most drought-prone district in India.

Erratic monsoons and a rain shortage, both attributed to changing climate, led to crop failure year after year and by the early 2000s debt-ridden farmers’ suicides had run into the thousands.

But in Singanamala mandal, an administrative block of Anantapur, women farmers like Ramadevi (41), Lingamma (38) and Katamayya (41) decided to return to organic fertilisers and pesticides and have since experienced enourmous savings.

Nagamanamma (31) shifted to organic farming in 2009, on 2 acres of leased temple land.

“I opted for organic farming for one reason: it asked for family labour and not the kind of investment that chemical farming demands,” she told IPS.

In the first year alone she went from seven bags of groundnut per acre to 15 bags, weighing 42 kilogrammes each, while reducing her expenditure from 40 to 12 dollars.

In this region, red-haired caterpillar pest attacks are common on the watermelon crop, which is grown beside the groundnut.

Previously, women had been forced to pay 40 dollars for an 80-millimetre dose of chemical pesticide-concentrate but with organic materials, the cost is not even a tenth of that.

Neem seeds gathered from the adjoining forests form a pesticide that costs just 10 dollars for a 50-kilogramme bag.

The benefits of going organic have percolated down to the landless too. A group of forest gatherers, smallholder farmers and women’s self-help groups from 10 surrounding villages are operating a unique symbiotic cooperative – the Singanamala Producers’ Cooperative – to produce organic pesticide.

With the help of a local NGO they installed a seed-pulverizing machine. While previously local traders had exploited the women seed gatherers, now they share profits equitably among members.

Women are already leading the way towards a more organic, just future. The question for the international community – including the U.N.’s CSW – is whether or not the world will follow.

*Naimul Haq contributed to this story from the Barind Tract, Bangladesh; Manipadma Jena from Anantpur, India; and Kanya D’Almeida from Washington DC

*This is the first of a two-part series on rural women, climate change and food security.