BUENOS AIRES, Apr 15 2010 (IPS) - “I had never worked before, and now I produce kilos and kilos of dried fruit to sell. They taught me how to dry peaches, tomatoes, peppers and grapes, and I decided on my own to try it with melons and pears – and they were spectacular,” Susana Robledo, a proud new entrepreneur from rural Argentina, told IPS. 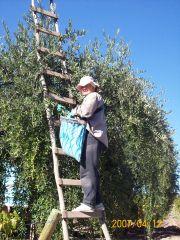 Rural woman in Argentina engaging in one of her invisible daily tasks. Credit: Courtesy of Estudios y Proyectos

Robledo is one of more than 200 women who participated in the Women Entrepreneurs Programme organised by the non-profit organisation Estudios y Proyectos (EyP) in the rural towns of El Colorado, in the northeastern Argentine province of Formosa, and Lujan de Cuyo, in the midwestern province of Mendoza, where she lives.

In the past, surplus fruit crops were simply left to rot. Now that Robledo has learned different techniques for dehydrating and preserving fruit, as well as tips on marketing, she stores kilos of various types of fruit in her freezer and sells them at the different markets held regularly in this region of Mendoza, where the local economy is primarily centred around vineyards and wineries.

The EyP project is aimed at developing rural women’s entrepreneurial skills in order to help them become economically independent. To this end, the organisation also works on such issues as women’s rights to land ownership and the problems they face in obtaining loans – as well as their right to decide how many children they want to have, or to protect themselves from domestic violence.

When women’s rights are laid out for them, “they take ownership and demand respect for them,” Liliana Seiras, the director of the project, told IPS. “We approach them from the angle of production, but we always move deeper into the underlying issue of women’s rights, to help them gradually move towards their own empowerment.”

For their part, the participants have only one complaint about the project and their trainers: “Why didn’t they come sooner?” This is the sentiment voiced by Paulina Gil, now in her 70s, who took part in the project in El Colorado.

“Our work was worth nothing in the past. The men toyed with us, hit us, threw us out of the house with our kids and moved other women in with them,” recounts Gil in a video produced by the organisation.

The video reveals the violence and deprivation of rights and opportunities faced by these rural women, a situation made more acute by their geographical isolation, as well as their isolation from one another. This is a phenomenon that the programme is also working to overcome, by promoting links and partnerships among the women, including joint business ventures.

Although every country has its own unique circumstances, rural women in Argentina face a similar situation to those in the rest of Latin America.

The United Nations Food and Agriculture Organisation (FAO) states that there are 24 million “invisible” women producers in Latin America, and this invisibility is heightened in rural areas, where women work in the same places where they carry out their domestic tasks and reproductive roles.

Agricultural engineer Cristina Biaggi, author of “Estudios de Mujeres Rurales en Argentina” (Studies on Rural Women in Argentina), told IPS that the invisibility of women’s work in the countryside is the result of cultural factors that lead them to think of themselves as their husbands’ helpers, as opposed to producers in their own right.

According to official statistics, only 21 percent of rural Argentine women consider themselves to be “employed”, while 10 percent are classified as “unemployed”. The remaining 70 percent are neither involved in nor seeking paid employment. As a result, they appear in the statistics as “inactive”, despite the fact that they work around the clock.

The “inactive” category is gender-biased because it does not adequately capture the work performed by rural women, said Biaggi, who stressed that their under-representation is partly due to the way they themselves view their work.

Susana Robledo, quoted earlier, is a prime example. She told us that she “had never worked before,” until participating in the Women Entrepreneurs Programme. In fact, she and other women like her are not only responsible for housework and child-rearing, but also take part in sowing, weeding and harvesting crops, raising livestock, milking cows and sometimes even producing crafts.

Nevertheless, Robledo, a 55-year-old mother of two sons – one of them already married – had never considered herself a rural producer, despite working side by side with her husband on their small farm.

In El Colorado, many women only came to recognise their capacities after their husbands left. “It’s amazing how many women there have been left on their own to raise their children,” commented Seiras.

When the provincial government stopped providing subsidies for cotton farming, the men went to the city to look for work, and most of them never came back.

The women were left with the burden of supporting their families, without an income, and also without legal title to their land, which meant that they were not eligible for loans, for example. In circumstances like this, it is no surprise that the training programme has been so successful, and so highly appreciated.

“The first thing we did was to set up a silo and grain sheller to store surplus crops that could be used as animal feed,” said Seiras. Through a few small changes and training aimed at improving production, the women were able to begin selling their goods directly to consumers in the various public markets held in the area.

But first it was crucial to work on their low self-esteem and lack of awareness of their rights, Seiras stressed.

In Mendoza, the first activity organised by EyP was a weekly hairdressing and manicure session for participants in the programme. “We taught them how to style their hair and to make skin lotions with honey, milk or cucumber,” she said.

“A month of ‘beauty salon’ sessions was like fertilising a field. It improved their self-esteem, and they were ready to begin training,” she explained.

The women were trained in a number of different activities until they found the one that best suited their abilities and needs. These ranged from weaving to the preparation of dried fruit and aromatic herbs, sausages and even pre-baked pizza crust.

Many of the participants are women originally from Bolivia who came to Argentina as temporary workers hired to pick garlic or onions and ended up staying. They face conditions of extreme subjugation, but have only recently begun to recognise this fact, noted Seiras.