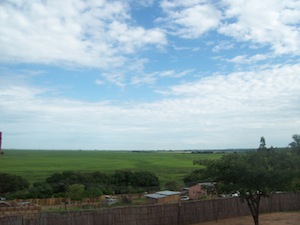 At home in Kandiana village, in Zambia’s Western Province, her late father allowed her to farm his two pieces of land, about a quarter of a hectare each, while the then 51-year-old Sitali waited for another man to marry her, and while her father continued to maintain ownership of the land.

The village is on the fringes of the Barotse Flood Plain, about 190 kilometres long and 70 km wide, which floods during the peak rainy season that starts in late January.

One of the pieces of land that Sitali’s father let her farm was near this flood plain and she was able to plant the traditional rice seed known locally as “Angola”.

The second offer of marriage never came. But through her efforts as a rice farmer Sitali was able to partially support her children, her mother, and even her late brother’s three children.

But Sitali is what the NGO Concern Worldwide describes as a “marginal farmer” because although she works hard, the food she produces is usually not enough to feed her family for the whole year. Other women farmers like Sitali have also had to endure months of hunger, especially towards the beginning and end of the harvest.

Rice has never been a serious cash crop in Zambia, despite its ability to alleviate poverty and chronic hunger. In the 2010 harvest statistics from the Ministry of Agriculture it does not feature among the country’s top 10 cash crops, which include maize, cassava, wheat – predominantly cash crops for white commercial farmers – and groundnuts.

For this reason it has always been outside the basket of crops that receive farm subsidies from the government.

But Sitali is a member of the Nañoko Cooperative Association, which negotiates for farm support for its members from both the government and civil society. It is one of the more than 87 such cooperative associations in the country to which women farmers belong.

According to government statistics, more than 1.5 million women work in agriculture, either as paid employees or as small-scale farmers. Most are semi-illiterate or illiterate and have no formal training in farming practices.

“Under the government’s Farmer Input Support Programme we now give rice farmers two bags of subsidised chemical fertilisers – one basal, and a top dressing… They are also given a 10 kilogramme pocket of rice seed,” George Muleta, a field officer for the Ministry of Agriculture, said. On the open market fertilisers can sell for as much as 37 dollars for a 50 kg bag, but with the subsidy it only costs 10 dollars.

The Western Province is the poorest region in Zambia, according to the country’s 2000 national census. Here there are almost two million households, and women like Sitali, who are either divorced, widowed or unmarried, head up to 19 percent of these homes.

And 13,750 women in this province are currently engaged in rice farming, according to the Ministry of Agriculture.

For the women in Western Province, farming maize has not been a viable option because the soil here does not support its growth. While it can grow on the flood plain it will be washed away by the seasonal floodwaters from January to May before it matures.

But Sitali and other women here have now benefited from the introduction of a new seed variety of wheat, locally called Nduna.

“We used to go hungry in the lean months of September, October and November – before the mangoes ripen,” Sitali said. “But not anymore, and all thanks to Nduna.”

Nduna, in the local Silozi language of the province, is the title of a traditional leader but the Ministry of Agriculture introduced a wheat seed variety of the same name in 2010. And it was developed specifically for the wetlands of Western Zambia, Muleta explained.

“The introduction of wheat as a second crop has really helped us. Otherwise we would have died of hunger. It has really put money in our pockets,” Butete Biemba, a rice farmer from Ushaa village in Western Province, said. Like Sitali she is a single mother looking after a family of six, after her husband died of HIV/AIDS. She is also a member of the Nañoko Cooperative Association.

Now both Sitali and Biemba earn 60 cents per kg for their wheat. It is more than twice the amount they can sell their rice for, which goes for 25 cents per kg at harvest time.

“Unlike rice, wheat does not require so much water to grow. Just the wetness in the soil is good enough for the crop. And the great thing is that by September all the wheat would have been harvested, leaving the farmers time in which to prepare their fields for the next rice planting season,” Muleta said.