Women make up 43 percent of the agricultural labour force in developing countries and fight hunger on a daily basis. In this column, Jose Graziano da Silva, director-general of the United Nations Food and Agriculture Organisation (FAO), writes that giving women rights and access, in order to close the gender gap in the most vulnerable countries’ farming systems, is one of the most important food security policies that governments and international cooperation agencies could ever implement.

ROME, Mar 7 2013 (IPS) - Around the world, but especially in the planet’s poorest regions, women represent a life force that renews itself daily, sometimes against all odds. 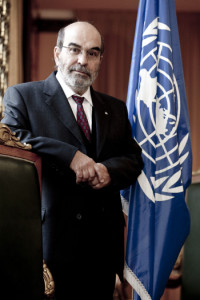 Rural women, for instance, make up 43 percent of the agricultural labour force in developing countries. Fighting hunger is something they do every day.

They are the faceless enlistees in the most devastating war of our times, one which – paradoxically – is the easiest to win: the war on hunger, that afflicts one in every eight inhabitants of our Earth, some 870 million human beings.

In millions of homes around the world, women are often the ones who make the day-to-day decisions that guarantee that food is placed on an otherwise bare table.

It is the responsibility of governments and international cooperation agencies to empower women, to do justice to the leading roles they play.

This means providing women with the rights, policies, tools, and resources they need for their unrelenting role.

The central role of women in food security and nutrition starts with the thousand days — from the start of pregnancy through the child’s second birthday – that mark a person’s development forever.

Women can make the difference – for better or for worse – in the stark arithmetic that adds up to 2.5 million child deaths every year.

Putting food on a family’s table involves extending a woman’s reach beyond her maternal instincts. It means applying her energy and her life lessons to tilling the land and harvesting crops.

This is especially relevant in Africa, where the 21st Century’s key battles against hunger are being fought. Some 239 million people suffer from hunger in Africa, 23 percent of the region’s entire population.

In rural areas, home to 60 percent of all Africans, we see the most outstanding features of this struggle against tragedy and the importance of women.

Women head one in four rural households in Africa. In Southern Africa, that share is 45 percent.

Wars and ethnic conflicts, migration and environmental collapse have all intensified the absolute and relative presence of women in agricultural labour markets, over recent years.

The new responsibilities being attributed to women come on top of their roles in feeding and caring for their families. The double and sometimes triple burden of work in the field, at home and in the community is not always recognised, or shared by the men in the households. This frequently makes the empowerment of women more difficult.

Paradoxically, everywhere in the world it is women who suffer most from restrictions on access to the legal ownership of land. This in turn limits their access to credit and to the inputs they need to maximise the utmost efforts they put into community wellbeing.

Achieving those rights and that access, in order to close the gender gap in the most vulnerable countries’ farming systems, is one of the most important food security policies that governments and international cooperation agencies could ever implement.

Making states aware of the core role women play in economic and social development and forging a political consensus to give them the tools and rights that their role demands will be vital steps in the fight against hunger.

And not only against hunger.

As mothers, sisters, daughters, wives and, oftentimes, sole supporters of their households, women often are on the front line in the struggle for social justice.