ROME, Nov 2 2012 (IPS) - Despite a sudden increase in July this year, prices of cereals on world markets remained fairly stable. But there are no grounds for complacency, as cereals markets remain vulnerable to supply shocks and disruptive policy measures. In this context, the good harvests that are expected in the Southern Hemisphere are important. 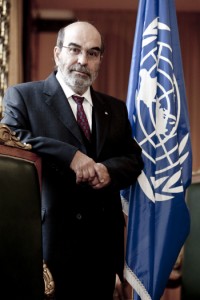 In the last ten years we have seen major changes in the behaviour of food prices. Up until around 2002 real food prices were falling but they have now been above trend for longer than at any other time in the previous forty years.

Food prices have also been volatile and the combination of high and volatile food prices will continue to challenge the ability of consumers, producers and governments to cope with the consequences.

All this makes it timely to reflect on recent price events and the reactions of the international community, especially since price volatility is likely to continue for the foreseeable future.

Set against this backdrop, the Ministerial Meeting on Food Price Volatility held on World Food Day on Oct. 16 was particularly relevant.

Twenty-five ministers and 13 deputy ministers met to discuss the issues and exchange views on how to strengthen measures to contain food price volatility and to reduce its impact on the most vulnerable populations.

The meeting recognised that a lot was learned from the 2007-8 and 2010-11 price hikes about appropriate responses at international, regional and national levels. They also agreed that much more could be done based on the Action Plan on Food Price Volatility and Agriculture that was adopted by the G20 leaders in November 2011.

Born just one year ago, AMIS is already a fully functioning mechanism and played a key role this summer in calming markets and preventing the deterioration of a vulnerable food market situation into the potential crisis that countless commentators were so quick to predict.

AMIS is providing an objective assessment of the market situation and risks, while calling on G20 member states to refrain from adopting policy measures that might further destablise markets.

This experience shows that coordinated international action and enhanced transparency and information on agricultural markets can make a difference in limiting food price spikes and excessive volatility.

Even when they are affected by adverse weather conditions that reduce production and export capacity, it is important that governments of exporting countries act transparently and dialogue with commercial actors to assure local availability of cereals without creating uncertainty in international markets.

This coordination is crucial because it can stop a drought or a flood from becoming a crisis.

Other actions to limit price spikes and excessive volatility ­ adjustments to trade rules, the creation of emergency food reserves, reform of biofuel policies and control of speculation ­ are all still works in progress. ‘Excessive’ is the keyword, because some degree of volatility is a characteristic of agricultural markets.

Action also needs to be taken to build resilience to that volatility in the medium-term.

This requires substantially increased investment in agricultural production with a particular emphasis on support to smallholder farmers.

Financing will need to come primarily from the private sector including smallholders themselves and major companies. This is a controversial area and concerns, especially over large-scale land investments, are well founded.

It is vital that any investment is made responsibly and for the benefit of all stakeholders. This is where the Principles for Responsible Investment in Agriculture, which will be discussed by the Committee on World Food Security (CFS), and the Voluntary Guidelines on Land Tenure previously endorsed by the CFS, have an important role to play.

FAO is prepared to assist governments in implementation of these safety measures. AMIS, Voluntary Guidelines and the Principles for Responsible Investments are all elements of the new global governance on food security that we are building, and that has the CFS as its cornerstone. We are making up for lost time, as food security governance was neglected until a few years ago. Fortunately we are learning that, in a globalised world, it is impossible to ensure food security in a single country or region. (END/COPYRIGHT IPS)

*Jose Graziano da Silva is the director-general of the United Nations Food and Agriculture Organization (FAO).